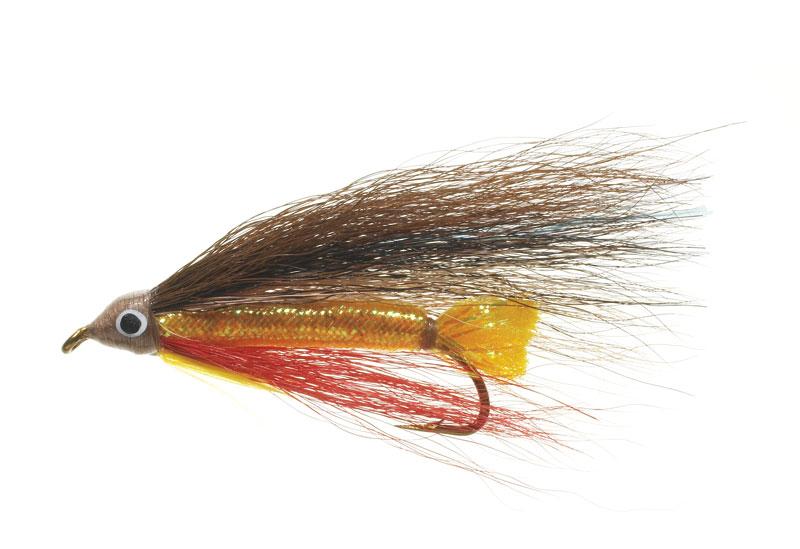 The tactic of using little fish to catch big fish is as ancient as the hook itself. It’s only in the last few centuries, however, that anglers have started to replace live bait with artificial lures and flies. For fly tiers, that means relying on special materials, shapes and presentations to accurately mimic swimming baitfish. While there are countless patterns to choose from these days, the following classics and newer creations are my favourites. Not only do they look and swim just like the real thing, they also catch fish.

Mike Fuller of Mike’s Fly Shop in Hammond, Ontario, created a series of baitfish imitations that’s proven effective on several different species, particularly the larger brook trout of northwestern Ontario. In the White River region, for example, his Northern Redbelly Dace have been most effective when slow-trolled at depths between 10 and 17 feet using a full-sinking line and 12-foot leader. Fuller’s flies have also done well when fished with a floating line.

During the 2003 Canadian National Fly Fishing Championships and Conservation Symposium in Russell, Manitoba, I had the chance to fish several outstanding local trout lakes. In one particular lake, the brown trout were corralling baitfish, then slashing through the bunched school to stun as many of their prey as possible. While my Woolly Bugger failed to produce any trout, it did hook one of their targets, a golden shiner. In the hospitality tent that evening, I asked expert fly tier Mac Warner to tie an imitation of it for me. He smiled and whipped one off in a minute or so. It was rough- looking-until I stripped it through the water the next day. The browns hammered it, clearly taking it for another hapless shiner. Since then, I’ve been tying what I call the M.W. Golden Shiner.

Tying Tip: Use a sharp blade to shape the wing

In reality a fly-rod jig, this Bob Clouser creation has probably landed more different species of fish than any other pattern. I’ve enjoyed particularly good action with the Deep Minnow while fishing for coho off the B.C. coast. I remember one time when the salmon snatched my fly with wild abandon as they busted an anchovy bait-ball driven from a kelp bed. Such savage action can have an incredible effect-your blood runs hot and pounds in your ears as you share in the carnage. If your fly isn’t grabbed after three strips, lift and recast. The presentation is so exciting, it’s hard to revert to the typically successful Clouser method, which is to swim the fly with a lift and drop, or bounce it slowly along the bottom. 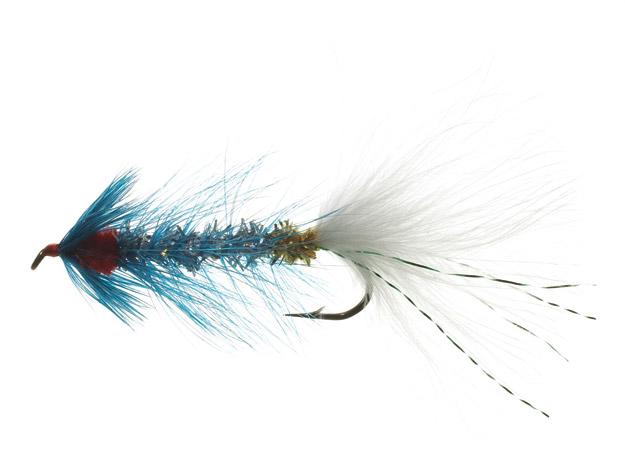 I created this pattern as a simple cousin to the more elaborate Nova Scotia Fishing Fly so I could tie them quickly to give away at a fly-fishing show in my home province. Later, I started to get happy reports back from local trout and smallmouth anglers using the fly. Why? Possibly because it resembles the size and coloration of the blueback herring, a local anadromous species that swims out to sea after reaching two inches or so in length. I once saw smallmouth bass driving migrating bluebacks onto a riverbank, so I started casting my Knock-off close to some nearby cover, letting it sink for a moment before retrieving it. Let’s just say I caught many reasons to smile that day, and many days since.

Fly-fishing history fascinates me. Finding this pattern in Campbell Hardy’s 1855 tome, Sporting Adventures in the New World, was particularly exciting because it’s the first written reference to a streamer I’ve found. And the fact the fly was created by a Nova Scotian First Nation angler makes it even more interesting. Although fly-tying recipes from that era were typically vague, and photos of the original fly are non-existent, the easy-to-tie Indian Streamer’s intent to imitate a small baitfish is obvious. Fish it close to the bank with an active retrieve, and you’ll see what I mean. For the recipe, I’ve substituted the original dressing with modern materials.

Hook: 2X-long wet fly, size 4
Thread: black, heavy
Body: white wool
Belly: length of wide, silver Mylar tinsel
Back and Tail: Insert a good bunch of peacock herl at the head, bound down along the back using the thread as a rib. Secure it at the end of the shank, leaving a little projection to represent the tail 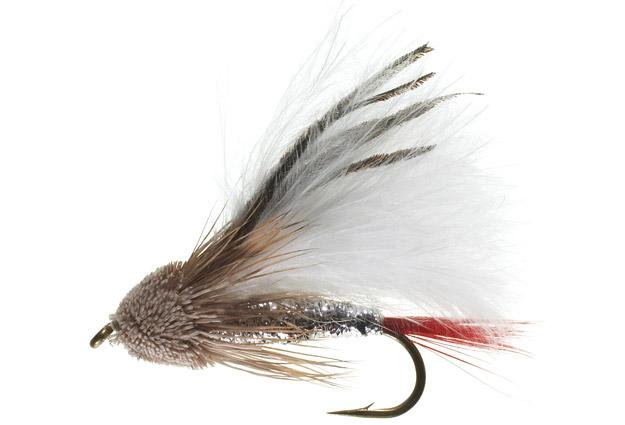 Don Gapen created the original Muddler Minnow to imitate a sculpin found in Ontario’s Nipigon River. Because it lacks mobile materials, it’s best worked with an active retrieve. By replacing the squirrel tail and turkey quill wing with marabou and peacock herl, however, you get a pattern that can be fished slowly. Meet the Marabou Muddler. You can even get results by casting up-and-across stream and mending line, letting the fly drift downstream parallel to the far bank. The spun-deer-hair head causes the fly to orient vertically, imitating a stunned or dead minnow floating along with the current. 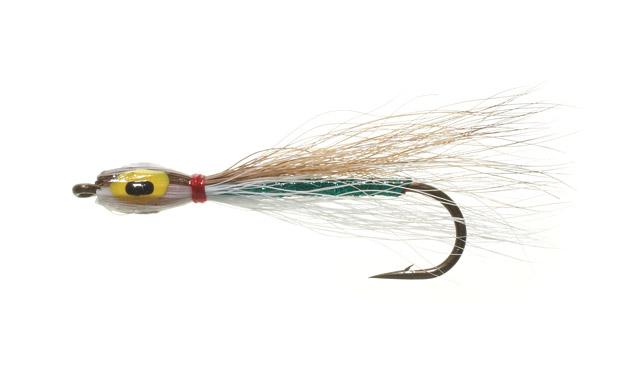 Created by New York angler Keith Fulsher as part of his Thunder Creek series, this fly was an early resident of my Ontario fly box. It was first presented in Fulsher’s 1973 book, Tying and Fishing the Thunder Creek Series, along with other unique streamer patterns for 15 eastern baitfish. Although it’s not the only way to present this trout fly, I’ve had considerable success casting it upstream to the head of a pool and stripping it back downstream as quickly as possible. (Please note: the 2006 revised edition of Fulsher’s book is entitled Thunder Creek Flies: Tying and Fishing the Classic Baitfish Patterns.)

Tying Tip: To create the Thunder Creek-style head, tie the belly hair underneath and the back hair on top of the hook. The tips should face forward, sized to extend beyond the bend (as shown) when bent. Let the hair rotate slightly so as to cover the top and bottom halves of the shank respectively. Bend both clumps of hair rearward and secure with thread. Coat head with varnish before adding eyes 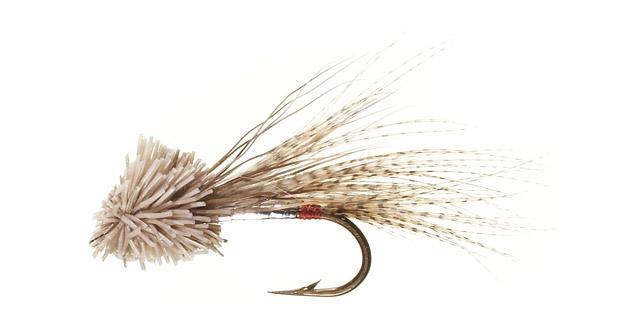 By the end of each summer, the year’s new crop of minnows will have grown large enough to attract considerable attention. In lakes and ponds, they tend to school around sheltering weedbeds, where they become fodder for predators. Watch for nervous water-surface movement betraying excited activity below. Better yet, fry leaping into the air removes all doubt that bigger fish are in the area. Although Tom Murray created this pattern to imitate saltwater sticklebacks for B.C. beach fishing, it also works well for these inland fry feeders. Casting to the outside of the weeds, and retrieving erratically, often gets results. Most of the hookups will be on the small side, but the odd great-granpappy makes the effort worthwhile. 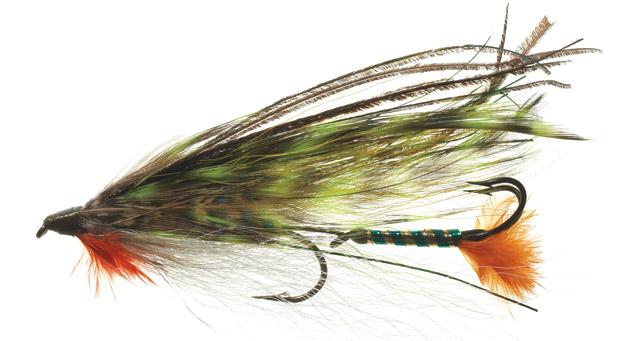 Trolling flies, particularly when the throttle is opened up a notch or two, can lead to short strikes. Extra-long shank hooks, such as the Partridge CS15 with its 10X-long shank, are one way to ensure more hookups. Or you could use two hooks in tandem (where stingers are legal, of course). That’s the approach Frank Guimond of Bécancour, Quebec, took to create this perch imitation (perchaude is French for “perch,” hence the name of the fly). Using a full-sinking line, the fly is designed for trolling for lake trout, pike or walleye. 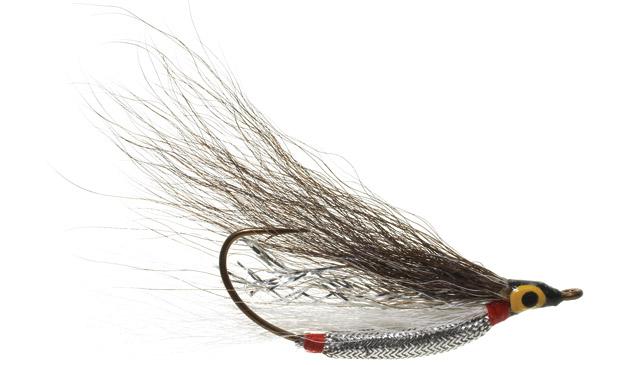 Flies cast around vegetation-on or below the surface-have a nasty habit of sometimes hooking everything but the fish. One solution is to get the hook to sit with the barb up, and that’s just what East Selkirk, Manitoba’s Jerry Beck achieves with his Keeled Silver Chub. Beck is a true pioneer of fly fishing for Manitoba’s numerous warm-water species, and each of the baitfish patterns in his Sand Shiner series features a cunning bend and a little added weight. You can find the full series, all of which perform as advertised, in A Compendium of Canadian Fly Patterns from Gale’s End Press.