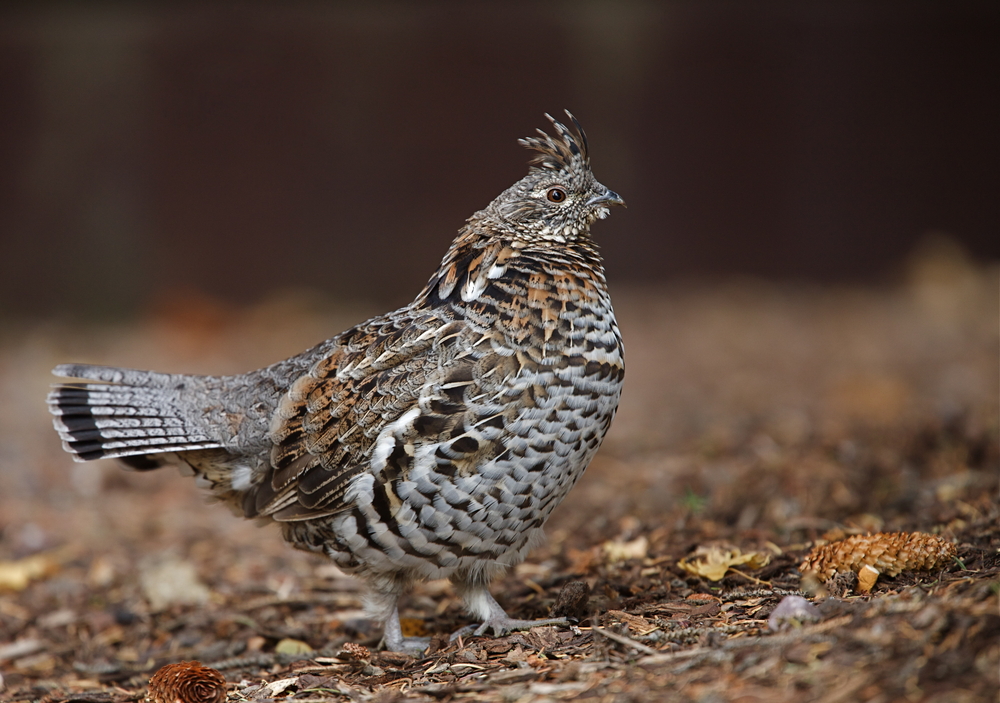 Are Ruffies Putting Your Wingshooting Skills to Shame? Here's How to Improve.

Ruffed grouse are sneaky and unpredictable. They thunder up in your face and disappear in a rib-cracking heartbeat. Canada’s southern ruffies, in particular, present one of wingshooting’s ultimate challenges. Generations of hunting pressure have given these birds a hair-trigger attitude and an arsenal of evasive tactics. Sometimes there’s just no easy way to get a tasty meal of grouse, but the following tips should help improve your odds.

Go with a light shotgun in 12-, 16- or 20-gauge, weighing around six or seven pounds. Heavy waterfowling guns will wear out your arms, and they’re too slow getting on target. Long barrels, meanwhile, will tangle in vegetation when swinging on a bird. Speed kills in grouse hunting because the birds are usually in thick cover and disappear from sight in a couple of seconds. Side-by-sides, over/unders, pumps and autoloaders can all do the job, provided they’re fast-handling lightweights.

Cylinder or skeet choke is the way to go. Most shots will be less than 25 yards, and these chokes provide a lethal pattern for grouse out to 30 yards. The sooner your pattern expands, the better for close-range shooting. And if you’re hunting the right cover, your shots will be at close range (10 to 20 yards). Small pellets pattern wider at those distances, making #7 1/2 shot a good choice until the leaves fall. Switch to #6 after that, when shots may be a little longer and the birds more heavily feathered.

Early and late in the day, hunt the edge of spruce or pine woods. Grouse roost in conifers at night, then usually fly down at first light to feed along the edge of the forest. Their foraging may take them quite a distance, but toward evening they’ll be back near their roost area, topping up their crops for the night.

It takes fast shooting to knock down a grouse in heavy cover, because the bird will be in and out of sight for a couple of seconds. Fast shooting requires you to be at the ready at all times. That means holding the gun in both hands, with the muzzle up near eye level out front and the stock down by your waist. And you should be poised to snap off the safety in an instant. If your shotgun is over your shoulder or down at your side in one hand, you’re taking it for a walk—you’re not grouse hunting. Finally, scan ahead at eye level while walking, not down at the cover; a bird could explode up into your line of vision at any second.

Grouse love edge cover. From mid-morning until late afternoon, you’ll find them where forest meets field or swamp or logging road, or wherever mature forest meets new growth. Edges provide a variety of food sources not found in mature, open forests. Look for grouse where the ground is covered with salad—small, leafy plants, berries, seeds and mushrooms—not dense, long grass. Logged areas, 10-year-old burns and overgrown farms that are being colonized with poplars are good spots to look, as grouse feed heavily on poplar catkins. Note: if the walking is easy, with no brush tearing at your pant legs, you’re not in the right place.

During winter, grouse stick close to clumps of conifers for warmth and shelter; evergreens break the wind and allow the birds to conserve vital body heat. On sunny afternoons, grouse will venture out to feed on the catkins of poplar, willow or birch trees. They’ll also eat spruce needles, so check out the spruce woods on blustery days late in the season.

Grouse escape by surprising you, but sometimes they give themselves away a few seconds before flushing. When a hunter approaches a covey of young grouse, the birds will scatter and make peeping noises to locate each other before flushing. If you hear peeping, get ready. The same goes for rustling noises; grouse often run a couple of steps to find a clear flight path before flushing. If you hear the slightest noise or see a flash of movement under a bushy evergreen, for example, quickly walk around the tree. It could be a grouse walking to the other side to flush. If you get halfway around the tree, you may get off a shot as the bird takes off.

If you hear a grouse flush and try to look for it before mounting your gun, your chance may be lost. The instant you hear a flush, step toward the sound—making sure it’s safe to shoot in that direction—and bring your gun to your cheek. If the bird is behind you, turn around with your feet; don’t twist your body. When your gunstock hits your cheek, the grouse should be coming up out of the thick understory somewhere beyond your muzzle. If the bird is going straight away and rising, swing the muzzle up through it and touch off the shot the instant it disappears behind the muzzle. If the grouse is crossing in front, swing from behind the bird, tracing the path it has just flown. Keep swinging through its body and touch off the shot when you pass its beak. And keep the muzzle swinging when you shoot-you can’t hit a moving target with a stationary barrel.

In good cover, stop often and stand still for at least 30 seconds. When you’re walking, grouse know the direction you’re headed; if you’re going to pass by within 10 to 15 yards, they may let you do so without flushing. But if you stop, they get antsy and flush. Only stop where you have secure footing and room to swing your barrel in any direction. And don’t let your guard down if there’s no flush: a grouse will often burst up the moment you resume walking.

Don’t expect clear shots when you’re grouse hunting. If you wait for the birds to be totally in the clear before you tap the trigger, one box of shells will last you a lifetime. If the shot is safe, take it, even if it’s through a screen of leaves and branches. There are a lot of pellets in a one-ounce load and some will get through the vegetation to the bird. If your target disappears behind a screen of leaves just as you swing ahead of it, touch the trigger anyway. A grouse should come tumbling back down through the treetops if the muzzle kept moving when the bird disappeared.

Grouse fly roughly 150 yards when flushed, then land on the ground or halfway up a tall conifer. If you see a bird fly into a tree and want to shoot it off a limb, just look for the football-shaped mass in the branches. But if you want to wait for it to fly down so you can flush it from the ground, mark the area and hunt away from it. Return after about 15 minutes; by then the grouse will have flown down and resumed its business. Note: when hunting with a dog, always circle downwind of the landing area so the dog can get the bird’s scent before bumping it.

Do all this, and chances are you’ll be bringing home supper the next time you head afield. Plus:

If you want your flushing dog to stay within shotgun range, try this. First, freeze a grouse carcass after removing the breast meat. Then, the next time you go hunting, call in the dog and have a buddy secretly throw the carcass from behind you and the dog over your heads. Shoot at it and let the dog retrieve it. Repeat this throughout the day (or longer) until the dog associates the gunshot with a grouse falling from the sky. Remember: what the dog really wants is to get a bird in its mouth. Allow it to do that every time you take a shot and it will stay closer to the gun. And once your dog flushes a few birds of its own close to the gun—and sees them come down after the bang—it will always hunt for the gun.

If you’re hunting with a buddy, take advantage of the fact that grouse usually fly to heavier cover when flushed. In scrubby edge cover alongside evergreens, walk parallel to one another about 30 yards apart, with the hunter closest to the evergreens lagging 20 yards behind. If the lead hunter flushes a bird, it may fly toward the evergreens in front of the second hunter, presenting a crossing shot. In wide coverts, the grouse may hear you coming and scuttle off to the side without ever flushing or being detected. To avoid this, zigzag back and forth so the grouse won’t know which way to sidestep. That way it will hold until it’s flushed. And always take a second sweep through wide coverts close to the edges, because that’s where any sidesteppers will be. A word of caution: when hunting with a partner, wear lots of blaze orange and don’t mount your gun unless you’re certain your partner is in the clear.

When approaching a likely covert, start from the thickest side or come at it from out of the evergreens if possible. Grouse are magnificent flyers, but the last thing they want to do is expose themselves in the air. Instead, they’ll run to the edge of cover and hunker down until the last second as you approach. When grouse finally flush, they may fly overhead back to the shelter of the evergreens, allowing you more time to shoot.