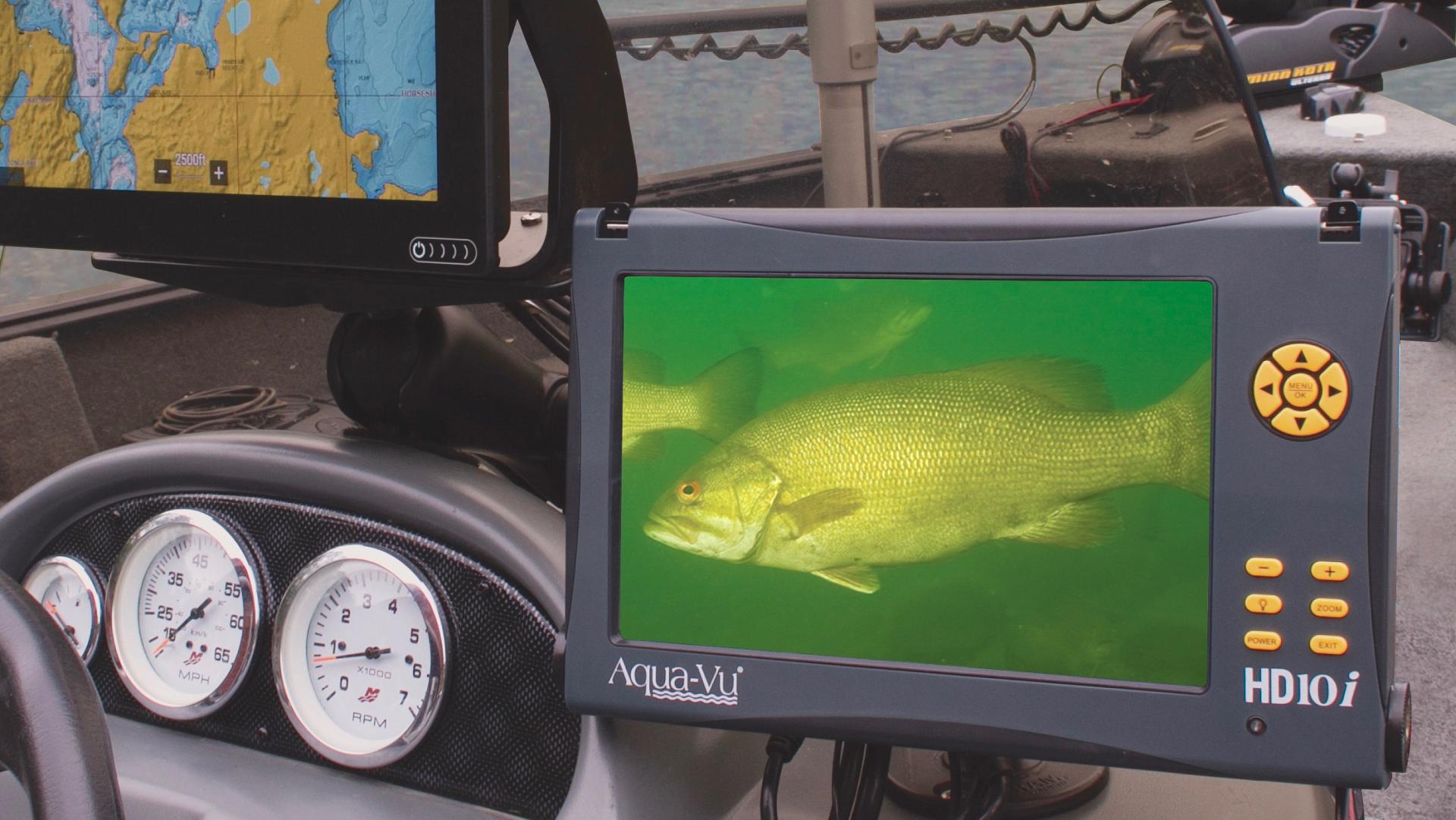 Why Underwater Cameras Are Your Next Great Trolling Tool

Watching fish actually strike your bait is informative (and entertaining!)

In the slightly stained water, the lunker fish appears on your LCD screen, carefully eyeballing your trolling lure for 10, 20 and then 30 seconds. You give the lure a little tug, and with a quick burst of speed the predator darts forward, grabs the bait, and your rod arcs under the fish’s weight and power.

Sounds futuristic? Maybe so, but that future is now here, thanks to the latest generation of underwater fishing cameras, which both record what they see, and transmit a live image up to your boat. Once thought of as an ice-fishing tool only, new high-def underwater cameras are versatile and user friendly. And they offer anglers a real advantage when fishing from a boat—or even a kayak.

If you type “underwater strikes” into YouTube, you’ll get over 150,000 results. Even after filtering out the goofy stuff, you’re left with hundreds of hours of spectacular underwater footage. Not only do anglers clearly find this video entertaining, it’s incredibly instructive to see what it really looks like when big bass, pike, salmon, walleye, muskies and other fish attack.

Thus far, anglers have used tough underwater cameras made by GoPro and other imaging companies to capture underwater scenes. However these devices can only record the action for later viewing. But next-generation underwater cameras, such as Aqua-Vu, let you watch fish react on screen, as the action occurs live and in high definition. It is, in effect, a new form of “sight fishing.”

“Watching muskies emerge from the inky depths to pursue my lure builds an incredible sense of anticipation,” says Dr. Jason Halfen, a Wisconsin-based angling electronics guru and owner of The Technological Angler website.

Engineered with a new, specialized camera housing, the company’s versatile XD Camera is compatible with a variety of intriguing underwater viewing accessories. The Aqua-Vu Live Strike System connects the underwater camera to fishing line, playing the action in real time, right on an Aqua-Vu LCD.

“What I’ve learned has been invaluable,” says Florida bass authority, and pro Joe Balog. “I’ve used Live Strike repeatedly in lakes and rivers throughout Florida, and seen how bass react to lures and live bait,” Balog says. “Never before was I aware of how often bass followed our offerings but didn’t bite. Much of this material I’ve captured and shared on social media. Folks can’t get enough of the underwater video we’ve posted.”

Aqua-Vu cameras are designed with trolling fins and ballast weights, allowing the camera to remain highly stable at trolling speeds up to five miles per hour, or even more. You then attach your fishing line to the Camera Live Strike system via a quick-release clip (similar to those used in downrigging), so when the fish bites, your line pops free and you can fight the fish as usual. Shallow diving crankbaits, spinners and live bait rigs, swimbaits and other soft plastics all work beautifully with this set-up when trolling or drifting.

These same systems can even connect to Wi-Fi (via AV Connect) for live monitoring on a smartphone or tablet or uploading to social media. LCD camera viewscreens are RAM mountable and can be hard-wired into boat’s 12-volt system. And a quick-attachment slide-rail allows anglers to attach any number of different accessories to an Aqua-Vu XD Camera, including the Ballast Weights & Trolling Fin, Live Strike Accessory, XD Pole Camera Adaptor and the XD LED Flood Light.

Halfen, who uses Aqua-Vu systems to educate anglers about fish finding and sonar interpretation, says that watching how fish react to various lures, actions, speeds and other variables offers an extraordinary learning opportunity. This helps anglers make better decisions about fishing tactics and strategies, such as replacing under-performing baits.

“When muskies, walleyes or bass come in for a look, we see every fin twitch and gill flare in HD video,” Halfen says. “When fish turn away, we can adjust and change to a lure with a different action or color. And when you see fish strike, it’s almost as fun as reeling them in—almost.”

One of several new Aqua-Vu XD underwater viewing accessories, Live Strike is an interactive, real-time underwater sight fishing system offering unprecedented potential for on-the-water excitement and education. The simple-to-operate accessory gives anglers the ability to monitor trolled or drifted lures directly on an Aqua-Vu LCD screen, at depths from 5 to up to 100 feet. The patent-pending XD Camera Housing with Quick Attachment accessory compatibility is available with all HDi series and 715C underwater viewing systems.

This guide to using underwater cameras was brought to you by Aqua-Vu, the principal innovating company within the underwater sight-fishing movement.