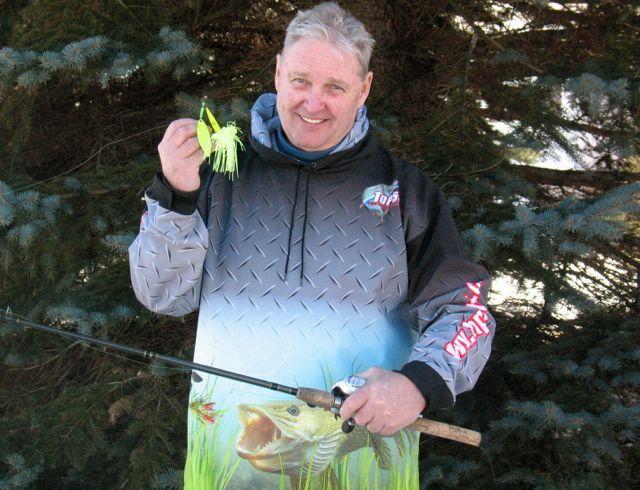 Gator Aid: How to Land Pike All Season Long

Known as Jimbo to his friends, long-time pike tournament angler Jim Patry is the founder of the Top 50 Pike Series, which comprises 13 tournaments in near-north Ontario. Based in Chelmsford, near Sudbury, Patry has mountains of pike-catching and tournament-competing advice. His first secret to taking home some hardware? Experience. “Whoever spends the most time on the water, that’s the guy that will capitalize,” he says. Here’s what else 67-year-old Patry (below) does to catch big toothy critters.

Patry always heads out with three rods geared up: one with a spinnerbait, another with a jerkbait and the third with an inline spinner. He avoids metal leaders, believing they’re too visible in the water. Instead, he uses 16 to 18 inches of 40-pound-test fluorocarbon tied directly to the main line of his spinnerbait and jerkbait set-ups. For the inline spinner, he’ll add a barrel swivel between the leader and the main line to help avoid line twist.

Since baitfish grow as the season progresses, so should the size of your baits, Patry advises. “I’ll start off with smaller 3½-inch Husky Jerk or something similar,” he says. He’ll then move up to a five-inch jerkbait for summer and fall to match the growth cycle of the baitfish.

In the spring, look for pike up in the shallows of weedy bays, Patry says, as well as sunning themselves on sandbars. “You can sight-fish them in the springtime,” he says. “They look just like logs laying there.” As the season progresses, and into the summer, search the deeper weedlines. “The bigger fish might be roaming the outside of it,” Patry says. “But you’re always going to get decent fish in and around those weedbeds, so that’s what we concentrate on.” In the fall, pike go deeper in big waters, such as the Great Lakes. In the Ontario Shield lakes Patry fishes, however, he finds them in some of the same shallow areas as the spring.

Patry’s advice to anglers who want to start tournament fishing? Start slow. “Don’t go at it thinking you’ll get into five or six tournaments the first year, because if you don’t do well, you’ll get totally discouraged.” Instead, start by competing on a body of water you’re familiar with, then move on to another if you enjoyed the experience, he says. “I’ve seen so many young guys come in…and they’re gonna kick everybody’s ass, but it doesn’t happen,” says Patry. “A few years down the line, you see that their boat’s been sold.”

Learn more about the Top 50 pike series at www.top50pike.ca.