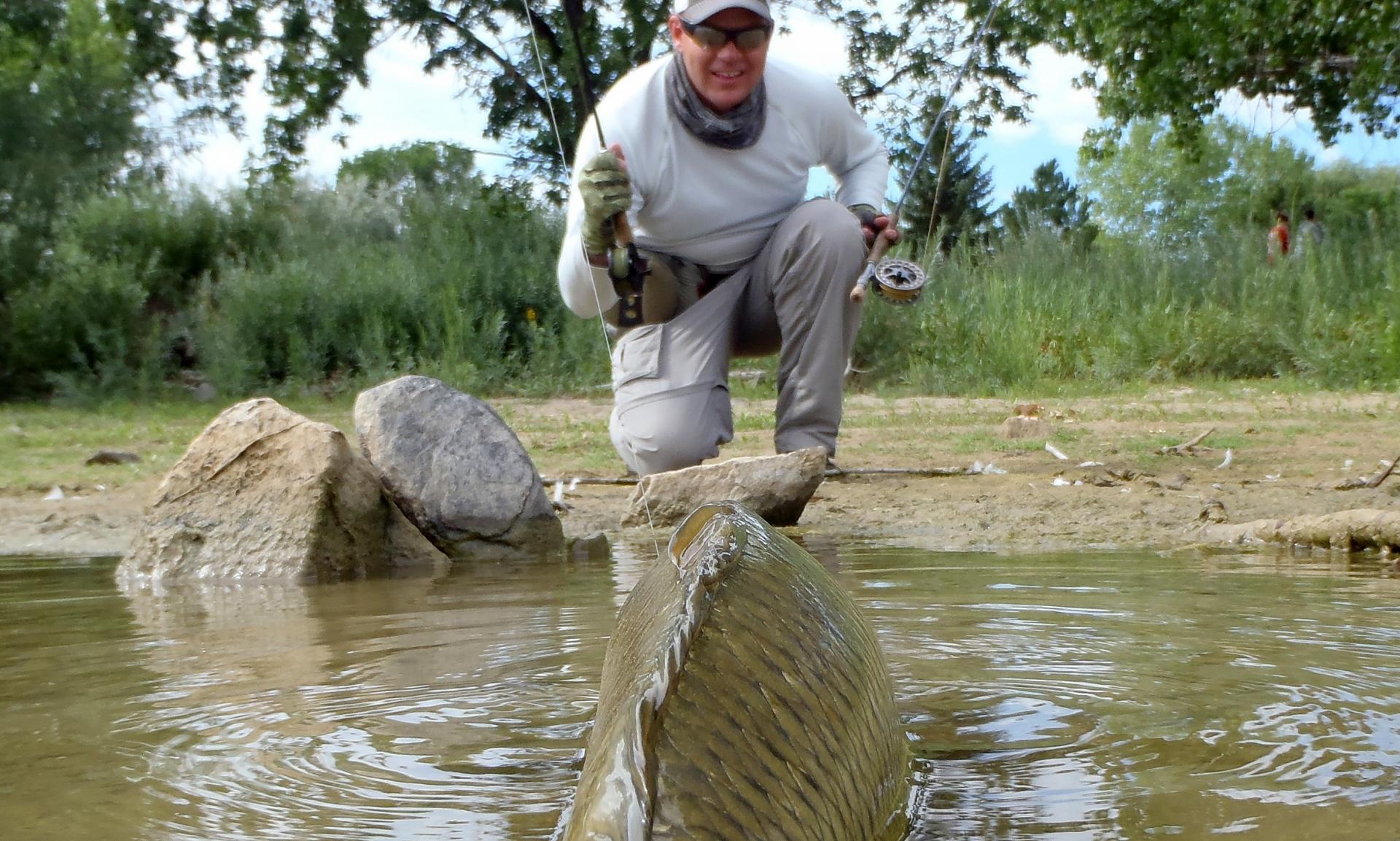 Expert secrets revealed: How to sight-fish for carp on the fly

The next big thing: How to land carp on the fly

Why carp may be fly fishing’s final frontier, and how you can get in on the action

Some fly anglers are drawn to their immense power and size. Others recognize them as a unique opportunity to sight fish. And still others simply see them as the ultimate test of skill. So much for the much-maligned common carp, a fish easily available to almost any urban or suburban angler across much of southern Canada.

Not to be confused with the rightfully dreaded Asian carp, common carp were first brought to North America more than 100 years ago and enthusiastically distributed as a welcome source of food and sport. As time passed, however, better access to trout, bass and other native species, combined with the carp’s prolific reproduction and its ability to live in less-than-pristine waters, led anglers to begin viewing it as a trash fish.

It’s time to rethink that attitude.

Carp grow to huge sizes by eating vast amounts of almost anything that’s small and edible, from seeds and berries to crayfish, aquatic insects and baitfish. And carp are roving, often frighteningly effective hunters, but they’re also big fraidy cats, spooking easily in shallow water. So unless you want to still-fish with European-style specialized gear and smelly baits, sight-fishing with a fly rod is actually an ideal way to delicately and precisely deliver small lures to cruising carp.

Still, broad distribution does not equal easy angling, says carp expert and fly angler R.A. Beattie. He’s the filmmaker behind Carpland, an adventure documentary about the fish’s history in North America, and the new subculture of fly carpers. Because carp are challenging, Beattie says, they’re not the best quarry for beginners. But if you’ve had success fly fishing for panfish, trout and bass, you may be ready. Here’s how to get started.

Carp are so widely distributed that if you live in southern Canada, the odds are good there’s a population in a river, lake or pond nearby. Look for areas with warmer water, such as sun-heated flats, shallow bays and eddies and pools off main river channels. The prime time to do this is spring through early summer. The water should also be clear or only slightly murky, no deeper than about four feet. That way, you can see them, and they can see your fly.

“Three-quarters of the rush with carp is the sight-fishing,” says Lakewood, Colorado’s Trevor Tanner (below), renowned in the carp world by his online alias McTage. And the instant feedback you get from seeing a fish move on your fly and eat it—or not—is very helpful in fine-tuning your tactics, says the author of Fly-Carpin, a great blog for novice and experienced carp anglers alike.

For ambush predators such as northern pike, bass and even river trout, anglers cast to promising cover or structure, and hope the fish will be there. With carp, the key is observing the fish—often a pod of them—to decide if they’re players. Their behaviour will tell you if they’re likely to be interested in your bait, and how to fish them. Only then do you air out your rod.

Carp swimming quickly in a straight line are likely spooked or migrating to a new spot. These will rarely bite, so you’re better off looking for more receptive fish. The ideal targets, says McTage, are carp swimming erratically. “It looks a lot like the way a shark swims through a reef,” he says. “A carp swimming back and forth in the shallows is out to kill—it’s looking to surprise something, and for small prey like crayfish, that carp is the deadliest creature in the system.” Drop a fly in range, and there’s a decent chance the carp will slurp it in.

Another common scenario, especially in spring, is finding carp tailing in shallow water. A carp with its tail up and head down, stirring up puffs of silt, is on the feed. Already focused on prey, these fish are less aggressive, but they’re also less wary, meaning you can sneak up on them, sometimes as close as 25 feet. You’ve got a good shot with these fish as well, provided you can put the fly close to them.

The tackle for fly carping is straightforward. If you’re likely to encounter only smaller carp, you may be able to get by with an eight- to nine-foot five-weight trout outfit. But given the size carp grow to in central Canada, you’re generally better off with a nine-foot, six-, seven-, or eight-weight outfit, and a floating line.

A decent reel is also helpful, since carp are one of the few freshwater fish that can test your drag and realistically take you into your backing. Leaders present a tricky balance, since these are heavy, but wary fish. In obstruction-free water, you can get by with five-pound-test fluorocarbon, but if the fish see little angling pressure, go up to eight- or 10-pound line. And, warns McTage, tie really good knots.

One of the helpful similarities between trout and carp fishing, says Oregon-based R.A. Beattie, is that successful trout anglers often have a profound understanding of the forage habits of trout. “Successful carp anglers develop the same understanding for forage and adjust their fishing accordingly,” he says.

A general-purpose carp fly box should include trout nymphs, particularly wiggly ones, some imitate-it-all Woolly Buggers, crayfish and a few streamers, all in sizes 8 to 12. But as Beattie says, the closer you can match the hatch in your own waters, the better off you’ll be. In and around the Great Lakes, for example, carp aggressively hunt the invasive round goby, often in packs. And if want to dive headfirst into fly carping, dozens of new carp-specific patterns have been developed in the last decade (see “The golden age” below).

Since presentation is probably the most difficult part of carp fishing, the closer you get to the fish, the better your chances of hooking up. Closing in on your quarry helps you make a more accurate cast, and detect the often-subtle take.

Research suggests carp don’t have great eyesight, but they’re exceptionally sensitive to noise and vibration. So the approach requires slow, careful wading. You can use a boat to get close to your spot, but slip into the water if possible and wade. If you need to stay afloat, paddle or pole if possible, and use a trolling motor only sparingly. Roar up to a flat Bassmaster style, and the only carp you see will be fleeing.

Presentation methods depend on the scenario, but bear in mind that a direct cast dropping the fly above the carp will scare it almost every time. One proven method is to cast a slow-sinking fly ahead of the carp, and only begin moving the fly once the fish is close.

McTage also suggests mastering the drag-and-drop, a unique presentation developed by fly carpers. You cast up to six feet past the fish, but stop your forward cast short and keep your rod high, so only the fly hits the water. Then drag the fly across the surface, and when it’s near the carp, let the it drop into the fish’s line of sight. This is one of the big secrets of getting your fly close to a carp without scaring it, says McTage.

Carp takes—you can rarely call them “hits” or “strikes”—are often subtle, especially since these fish can hoover up small prey from six or eight inches away. Use a quick but gentle trout-style hookset when you feel any slight bump on the line, or even see the fish move over your fly. Then hang on. Expect even a five-pound carp—let alone a 30-pounder—to make long, fast runs, bury you in the weeds and fight to the very end.

And once you land the fish, pat yourself on the back. Sure, it’s homely, but a carp taken on the fly rod is a true trophy. 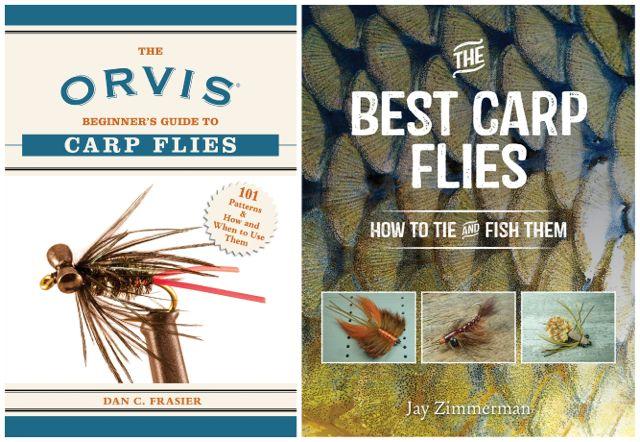 The small but enthusiastic cadre of anglers pursuing carp has produced a growing assortment of new specialty flies. Often creative and unconventional, these patterns imitate North America’s diverse carp forage, including crayfish, gobies and even clams. Early 2015 alone saw the launch of two excellent books: The Best Carp Flies: How to Tie and Fish Them by Jay Zimmerman, and The Orvis Beginner’s Guide to Carp Flies: 101 Patterns & How and When to Use Them by Dan C. Frasier.