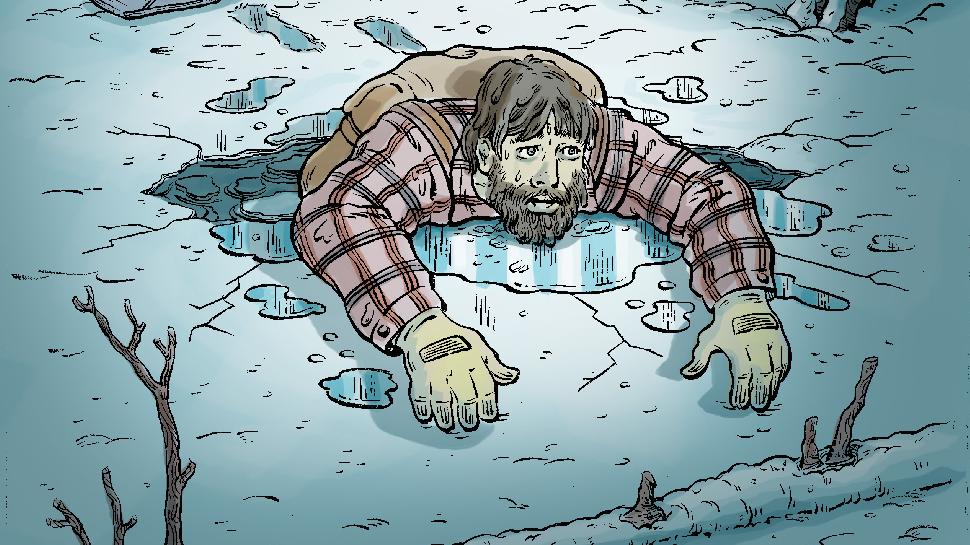 When It Comes to Winter Woes, Nothing Poses More Danger for Outdoorsfolk Than Icy Mishaps, As These Tales Reveal

Ice. Slippery and smooth or snow-covered and silent, it’s part of the landscape for those of us who wander the winter woods. As a lifelong trapper, I’ve snowshoed countless kilometres over all types of frozen landscapes, always aware that ice is like a short-tempered buddy who is quick to act. But despite all my caution, ice has gotten the better of me more than once—both over water and on land.

My worst experience happened while trapping beavers through the ice, the classic method for harvesting their historic pelts. It was a dull December day, and like many times before, I made my way across a series of ponds, checking on my traps. The last pond yielded a large beaver, which made for quite a load considering I was already lugging an ice chisel pole and a heavy pack. A nearby beaver dam sparkled from the frozen water that had washed over it before freeze-up, but since I was in a hurry, I decided to walk along it as a shortcut back to my ATV on shore.

This wasn’t an unusual decision, as I’d walked along dams many times before during the winter. I simply adjusted my load and used the chisel pole to help keep my balance. The overflow was still open, but I waded the chilly water with no problem as I made my way to shore.

It’s truly impossible to explain the odd speed with which the next events took place. It was as though everything happened lightning quick, yet frighteningly slow. With shore still a ways off, I noticed my wet rubbers seemed to be losing traction just as I toppled over onto the frozen pond and crashed through the ice. Shock is a poor word to explain how it felt as I slipped like an otter under the dark, silent, crushingly cold water. It was more like a punch to the heart.

Opening my eyes, I realized I was on my back, with the weight of the pack keeping me facing the ice above, separating me from the air I desperately needed. For some reason, I looked back toward the dam and saw the jagged hole where I’d crashed through and an odd thought came to mind: Backstroke.

Somewhere in my air-deprived mind, I recalled my wife telling me if I ever fell into the water to get on my back and gently backstroke toward shore. I was suddenly feeling sickeningly dizzy, so I had to try something. With a few strokes I was underway, and the hole soon appeared to be closer. I kept making headway, but I was becoming more and more feeble as the last of my oxygen drained away. Finally, with one last weak push, I reached the hole and clawed for daylight.

Hopelessness and heartbreak quickly turned to grim determination as I broke the surface and gasped for air. Maybe it was my oxygen-starved mind, but I could hear a voice telling me, You’re not going to die here today. Still floating on my back, I reached back and grabbed the dam, then hauled my soggy carcass to safety.

Freezing and fumbling, I staggered to my feet trying to gather myself, but I couldn’t seem to think clearly. I stared at the dark mouth of the hole and began to shake uncontrollably. How long had I been under the ice? I thought. Not long, or surely I would have been just another statistic. But I wasn’t a statistic. I was alive.

I grabbed up the beaver from where I’d dropped it and stumbled along the dam to shore. Wringing the water out of my clothing was pointless, as most of the layers had already frozen. At least I managed to pry off my boots and dump out the slush. I should have made a fire to get warm, but in my groggy state, all I could think about was home. So I fired up the ATV.

The trip out was a nightmare of frozen clothes, increasingly numb reflexes and a grim resolve not to waste the chance fate had tossed me. I don’t recall much of the journey home, but I remember shouting for my wife, Lorain, to help pry me off the ATV once I’d arrived. And after she got me into the house, she had to cut me free of my icy cocoon and, despite my protests, wisely begin to warm me up in stages. When Lorain finally asked me how I managed to escape drowning, I had just one word: “Backstroke.”

Everyone knows about the potential for danger on our countless frozen waterways during winter, but ice can present plenty of perils on dry land, too. Just ask me.

During a deep-freeze, wet spring snow can produce an icy crust thick enough to support a bull moose, and the conditions one March morning were perfect for just that. I’d travelled over such rock-hard snow before on Big Red and Tri-Moto three-wheeled ATVs, but on that day, I had borrowed a friend’s new four-wheeler. Now commonplace, four-wheeled ATVs were still new at the time, and I looked forward to test-driving it.

This was all long before cleats, ice studs and track beds, and even tire chains were pretty rare at the time. Still, on the several times I encountered icy conditions, the 4×4 300cc was more than capable of travelling over the slippery crust. After an hour’s ride, I was sold, so I headed home. The drive back was uneventful—until I spotted a steep, tree-lined hill that had served for generations as a fast toboggan slide.

The challenge was on. Pointing all four wheels at the hill, I accelerated up the grade. Things were progressing nicely until the front end started sliding and, quick as a cat, the ATV flipped over backwards. In an instant, I saw sky then snow, then sky then snow as the ATV tumbled, my skinny frame pressed against the gas tank and protected from harm by the high-set handlebars of the day.

Realizing things were getting critical as the third revolution began, I decided to let go and clear the saddle. Suddenly, I was airborne and free of the ATV, only to crash into a balsam fir—12 feet up. As I fell down the side of the tree, I felt my ribs snap in unison with each limb I broke off. Landing with a thud at the base of the fir, I looked up to see the ATV flip one last time before sliding to a halt. I stared at the still slowly turning wheels and thought how lucky I was be clear of the upside down machine.

My brief moment of euphoria soon changed as increasing pain not so subtly reminded me I had some serious injuries. Luckily, I was wearing a helmet, which of course hadn’t done much to protect the rest of me. I was able to flex my fingers and toes, so I knew my spine was okay, but every breath hurt terribly. At times I could hobble along, but mostly I just wormed my way home, sliding on that same icy crust I’d been so excited to drive over.

In the end, my pal who loaned me the ATV wrote off our friendship—permanently. And my long-suffering wife would go on to remind me for a decade or so afterwards of my devil-may-care attitude toward life. As for my injuries, I suffered internal bruising, a wrenched back and five cracked ribs that now fiercely ache the day before a cold snap arrives. Ice had taken me to task for being foolish and given me a schooling not to be forgotten.

Of course, ice isn’t some malevolent force lurking in the winter darkness or an evil foe that needs to be vanquished. But like everything in nature, it doesn’t have much use for the careless. Tread carefully, or like me, you just might find yourself upside down and over your head.

New Brunswick’s Cary Rideout hopes his days of ice mishaps are long past.