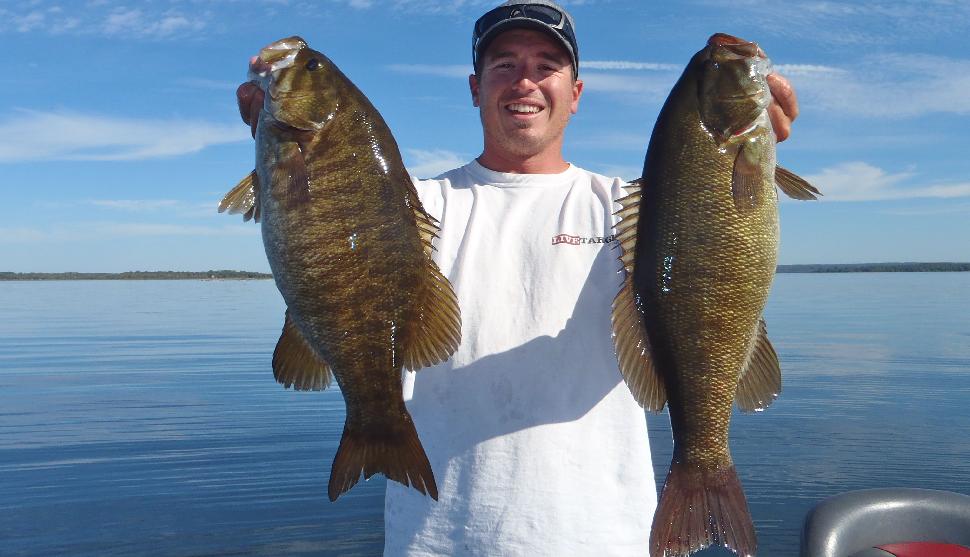 With Bass Season Arriving in Much of Eastern Canada, One of Ontario's Most Successful Anglers Shares His Best Tips

Spending almost every day on the water all summer long, 28-year-old Erik Luzak is a devoted—some might say obsessive—bass angler. Ten years ago, he founded Bass Class, a combination guiding service and fishing school, and since then he’s taught more than 500 clients how and where to catch monster bronzebacks and bucketmouths. And the Orillia, Ontario, angler’s dedication to the sport is paying off.

Luzak says that when he takes clients fishing, he approaches the day as though he were competing in a tournament. And how exactly does he do that? We asked him to share his podium-friendly advice for catching more bass, whether it’s for fishing in a big-stakes competition or just for fun.

Ninety per cent of the time for smallmouth bass, Luzak uses a 6½-foot, medium-action spinning rod spooled with 15-pound-test braided line. Using a blood knot, he then ties on a six-foot leader of 10-pound-test fluorocarbon. “It can change from technique to technique, but that’s a pretty common set-up,” he says.

Luzak recommends paying close attention to your reel’s drag. “You need a nice smooth drag for smallies, or else you’re going to break them off.”

As for horsing big largemouth out of the weeds, he employs a seven- or 7½-foot, medium-heavy- to heavy-action flipping rod with 30- to 50-pound braid tied directly to the lure.

Get a GPS-equipped fishfinder and mark waypoints on every fishy-looking spot you come across. “A lot of my favourite lakes around the Kawarthas and central Ontario look like landmine fields with little scattered dots everywhere,” Luzak says of his waypoint-filled sonar screen. Each one of the waypoints represents a rock, weedbed, stump or something else likely to hold fish. “You try to save everything you find, and come back to it.”

Whether you’re fishing in a tournament or just for fun, you still need a game plan in order to fish efficiently. That could mean scouting some spots beforehand by spending time on the water, or by using hydrographic maps or Google Earth.

During last year’s two-day National Classic, Luzak already had some spots in mind, having fished Cameron many times before, and, of course, having pre-fished for the tournament. Accordingly, his strategy was to hit about eight small spots he knew could hold one or two decent-sized fish each.

“Almost all of those spots gave us at least one fish, so we got off to a really good start,” says Luzak. They even caught their biggest fish of the tournament that first day—a 5.65-pound largemouth.

Even though you may have a strategy, remember, there are no guarantees in fishing. “You could just go out there and everything you planned on might not work,” Luzak says.

On the first day of the Classic, for example, the temperature was seasonal, but overnight it dropped to -1°C. Luzak figured things would be different on day two, and he was right—none of the previous day’s spots had produced a single fish by early afternoon.

However, they had yet to hit the spot where they boated the big fish the day before. Once there, they ended up catching their bag of fish in just 25 minutes. “Those were the only fish we caught the entire day,” says Luzak. “Day one was about running around hitting a bunch of different spots; day two was about that one little magic spot producing our entire limit for us.”

“One thing that’s definitely helped me over the past couple of years is the fact that I can fish seven days a week in the summer,” Luzak says. Between his Bass Class, tournaments and pre-fishing, he’s on the water some 29 days a month, from the beginning of June to the end of September. And he would stay on the water even later in the year if he didn’t have to return to his environmental consultancy job in B.C.

While you may not be able to fish as much as Luzak, you’re certainly not going to catch fish sitting on the couch at home. Instead, spend as much time on the water as you can, getting to know where the bass are, and what they’re doing. There’s no substitute for first-hand experience.

Success at fishing is often determined by your attitude, says Luzak, so when things aren’t going your way, don’t panic. At least that’s the mindset he takes into competition.

“You have to fish a tournament day a lot differently than a fun day of fishing,” he says. “It’s more of a mind game because the other boats out there are essentially screwing you up, since they might be on your spots.” The takeaway here? A fun day of fishing should be just that.