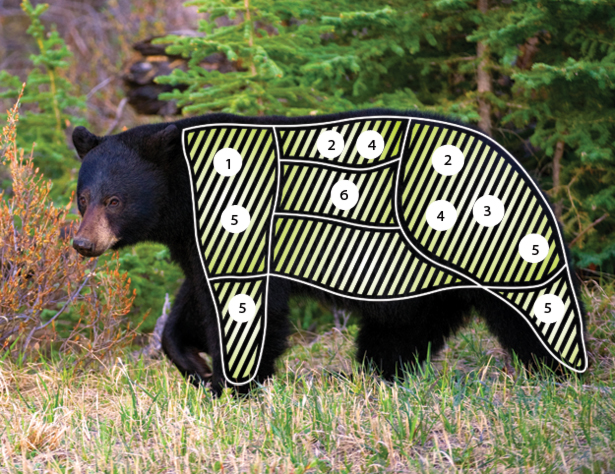 1. Chuck: This meat comes off the neck and tends to be tough, so grind it, along with any trimmings, together with 25 per cent regular ground beef. Use your favourite seasonings and spices to make savoury spaghetti sauce, sloppy joes or meat loaf.

2. Steaks: These can be sliced from the backstraps or from the round roast that comes off the upper back quarter. Season as you would a pork chop, and fry to medium well.

3. Oven roasts: These are typically carved from the upper portion of the back quarters. Brown them quickly in a skillet, then season and cover with strips of bacon before slipping them into a 325°F oven  (see “Kitchen cues”  in our article Dining on Black Bear for more roast tips).

4. Jerky: This can be made from most any long-fibred tissue, particularly from the backstrap and the back quarters. However, jerky is made by drying thin seasoned strips of meat at temperatures too low to destroy trichinella larvae, so you’re playing the odds. In the case of country-style sausages made from uncooked trimmings, frying will prevent trichinosis.

5. Pot Roasts: The lower portions of the back quarters, as well as the upper and lower front legs, are suitable for pot roast, particularly in a slow cooker. Figure on a medium to low heat and as much as six hours cooking time for meat that falls off the bone. Check out this bear roast for a sample recipe.

6. Ribs: The ribs, particularly the short ribs, have a surprising amount of meat. Braise them with beer in a baking dish tented and sealed with aluminum foil, after removing most of the fat. When the meat starts to separate from the bone, grill the ribs to a deep golden brown. During the last 10 minutes of grilling, baste the ribs with a tangy sweet sauce made with brown sugar, orange juice, tomato sauce and chili (to taste).