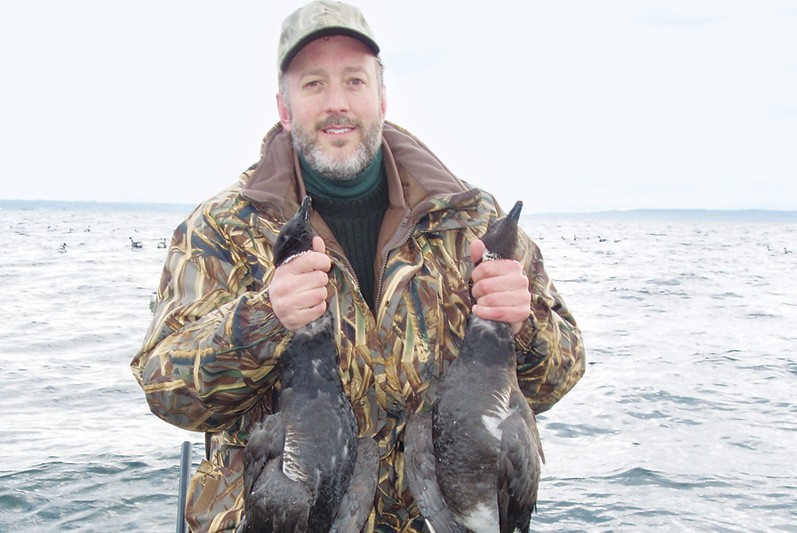 For These Goose Groupies, Loyalty Is Key

The term “cult” perfectly describes the devoted few that hunt the black brant—if you include the words fanatical, hardcore and slightly crazy. Also known as the Pacific brant, this small, Arctic-nesting goose winters along the Pacific coast from Vancouver Island south to Baja California, Mexico. Starting March 1, there’s a 10-day season along B.C.’s lower mainland, where a small core of hunters pursues the brant under extremely challenging conditions.

One such devotee is Ken Thompson, a director for Ducks Unlimited Canada who lives in Delta near the mouth of the Fraser River. I joined Ken for a hunt last March, and learned first-hand that brant hunting on the salt chuck is no place for the timid or the unprepared.

I also learned the local brant-hunting community is extremely tight-knit, its members staying in regular contact with one another throughout the entire season. As we prepared the boat and decoys the night before our hunt, for example, Ken was constantly on the phone, discussing bird movements, prevailing winds, tides and plans for the day’s hunt. It’s an interesting dynamic, with none of the competitiveness that often creeps into other hunting cultures.

The morning of our hunt was as nasty as I’d seen for some time. The winds were blowing hard and the clouds dumped a steady mix of rain and snow that morphed into frozen pellets moving horizontally over the water. We headed out in the pre-dawn squall aiming to hit Ken’s favourite spot on Boundary Bay, but the hard breaking five-foot swells forced us to change plans and drive north to the Tsawwassen ferry landing instead.

There, we launched Ken’s 16-foot layout-style boat, piled in and pushed off. While the water was calmer than in Boundary Bay, the ride out to the hunting spot was no picnic—it felt as if we were skipping across the ocean on a Frisbee. The freezing salt spray from the pounding waves showered us relentlessly, and my glasses were soon coated in an icy glaze. After 20 minutes, we slowed and set out our decoys, anchored and waited hopefully for some birds to pass within range as we bobbed in the swells.

I knew that brant hunting is a hit-and-miss affair-the two-bird daily limit is decidedly optimistic, if you ask me. Even the most seasoned hunters celebrate when they take birds. So we waited patiently, occasionally spotting the distant, telltale straight lines of trading brant low over the water, barely discernible through the grey skies.

Soon, I regretted not having my own outerwear. Ken had generously lent me his seconds, but waders and coats that don’t fit properly offer limited protection against the potent mix of salt spray, sleet and freezing wind. After three hours, just as I was starting to tire of the game, the wind settled, the clouds faded and the sun emerged. It’s amazing what a little warmth does to the body and spirit, and my resolve was quickly restored.

The sun must have inspired the geese, too, for suddenly a line of eight birds was moving across our bow at about 100 yards. Just when we thought they would ignore our carefully laid spread, the tail bird peeled from the flock, turned upwind and headed straight at us. Ever the gentleman, Ken whispered for me to take the shot whenever I was comfortable. The brant closed to about 35 yards before beginning to swing, and as it turned I rose from the floor of the boat, pushed the barrel of my shotgun in front of its distinctively short bill and hit the switch. Just like that, I had my first brant.

As it turned out, it was also my last, at least that day. We hung out for another hour, but had no further opportunities. Still, the outing was a complete success: I’d experienced a fascinating and unique hunting tradition while spending a day afield with as fine a hunting partner as you could hope to find. And to actually collect a brant when many don’t, well, what more could I ask for?

Where to Find Brant Geese

While a small number of brant geese overwinter along the B.C. coast, most are spring migrants heading back to their Arctic breeding grounds from as far south as Mexico.

Populations peak between mid-March and early May, with the majority found along Boundary Bay and the east coast of Vancouver Island, particularly around Parksville-Qualicum Beach and Comox Harbour.