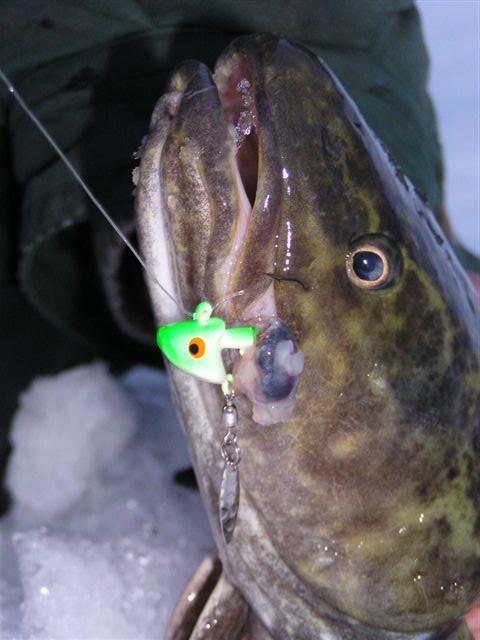 This brings us to jigging.
FishingFishing Tips & Tactics

In last week’s blog, Saskatchewan burbot guru and good buddy Jeff Matity shared some of his considerable knowledge and experience about ice fishing for burbot (also known as ling, eelpout, and fresh water cod). Jeff gave us a ton of great tips for locating burbot throughout the winter ice fishing season. Today, as promise, Jeff’s is going to fill us in on the best ways to catch burbot. So, let’s get at it!

Gord: Tell us a little about your favourite ice fishing set ups and rigs. What pound test line do you use, what lures do you favour, and what do you tip your hooks with? Also, how specifically do you jig your baits?

If you ice fish for other species, you probably have everything you need to catch burbot—but not the quality and quantity of fish I expect to catch.

Most people are shocked when I share with them my favourite tactics and lures for burbot. It’s most easily explained by saying you should use whatever you would when you go ice fishing for walleye, only double it. No, triple the size of your lures. In other words, for first ice walleye I like using 1/4-ounce REELBAIT Walleye Flasher Jigs or 1/2-ounce REELBAIT Fergie Spoons. For burbot, in the same situation, I use a 3/4-ounce Flasher Jig or a 1.5-ounce Fergie Spoon.

Well, for starters, burbot aren’t picky eaters but you can help them find your lure. What I’m talking about is noise. Big lures make noise when they hit the bottom, as well displace more water and create more vibration when you jig them.

For burbot, we are not talking about fishing within six-inches of bottom; we’re talking ripping the lure as high as you can reach above your head and then letting it drop, building up speed and momentum before it crashes on the bottom.  Depending on the substrate, the collision will make a “thud” and send sand and muck flying or make a “whack” as it contacts rock.  Either way, the trap is set.

I follow up these major movements with some bottom dancing and then a comfortable two foot stationary pause, while I watch my sonar for signs of life.  If you fish with an underwater camera, continue this  high-to-moderate pounding until you see a fish move in.  Once the fish moves in, the bottom dancing or above-bottom hold will seal the deal.

For bait, anything meaty will work including beef heart, salted shiners, fish eyes, rubber bodies and my favourite, ciscoe belly. To make my “butterfly steaks” out of ciscoes, you must first put the ciscoe on its side and cut all the way through the fish following the lateral line. Then, cut off the head and you are left with three pieces: the head, the majority of the body including the tail and back, and the U-shaped belly.

This U-shaped belly can now be steaked into six or seven quarter-inch-wide pieces. At the bottom of the “U,” you will find the ventral midline where there is a tendon.  This is where you hook the Flasher jig through the butterfly steak.

In the water, it really does “butterfly,” giving off scent, scales and a wonderful profile and flash. It is true burbot candy!

As far as jig colours selection goes, glow is king. Any colour glow will do, but if you don’t have any glow jigs, hot fluorescent colours like pink, orange and chartreuse will work. Burbot can see quite well, but a little “taunting” goes a long way.

To animate these large lures and baits you need some “umph” in your rod and reel selection. I use the same set ups for burbot that I do for pike and some walleye applications.

I use 20-pound test, Hi-Vis Sufix Ice Briad in the Neon Fire color. To my main line, I tie a four-foot leader of 17- to 20-pound test Sufix fluorocarbon. I join the lines with a barrel swivel. The barrel swivel is a useful aid in landing burbot as they often “pretzel” themselves around the bottom of the hole. By grabbing the swivel, you have a good handle on the fish to patiently wait until it relaxes and slides up the hole.

I use 20 or 30 Series spinning reels and have come across two rods -HT Enterrpise’s 32” Medium-Heavy HT-PolarLite and Rapala’s 42” Heavy R-Type Ice that really lend themselves to this toe-to-toe burbot brawling.

The 42” R-Type Ice is a great choice, by the way, for running and gunning outdoors while the shorter HT rod is perfect for inside an ice shack. They both have moderately-fast actions to provide lots of power for solid hook sets, while allowing some forgiveness when dealing with a jumpy, rolling fish at the hole.

Finally, you need tip-ups when you’re searching for burbot and gauging their activity levels. My favourite is HT Enterprise’s Polar Therm tip-up that covers the hole, eliminating light, while sealing in thermal energy and keeping your holes relatively ice-free.

When I’m scouting an area for burbot, I set a string of tip-ups from within the shallow shoal, down the drop-off and onto the basin flat. Why both shallow and deep?

Well, the most active fish are often going to be in one or the other location and post-frontal, non-active burbot are going to choose the quiet, off-to-itself tip-up if the jigging program struggles.  It is easier to set several tip-ups (two lines per angler is the standard in most provinces).

What makes setting tip-ups for burbot so fast and effective is that the jig (I like a 3/8-oz short-shank REELBAIT Flasher jig) is set right on bottom. That’s right, drop your tip-up lure down the hole, move on to the next, and the next, and so on and then come back and set the flags.

The stand-up feature of the Flasher jig makes it uniquely suited for this type of fishing, not to mention the short-shank version has a beefy, 1/0 hook that can handle the hand-to-hand encounter with a big fish.

Likewise, it is a compact target that the burbot gets entirely in its mouth, the first time, which is necessary to keep the fish from dropping the bait.  For bait on this “do-nothing” tip-up set-up, I prefer chunked ciscoe meat (make sure you keep the hook exposed) or a jumbo salted shiner (cut into 3 pieces and skewered onto the hook). Just be aware that tip-up caught burbot are often “keeper fish” as they can gobble the lure down deep.

By the way, I spool my tip-up with 30-pound test, Sufix Performance Metered Tip-up line and tie it directly to the jig. It is super soft, which encourages the burbot to hold onto the bait and has alternating black/white makings every 5 feet.  But  I colour the white portions every 10 feet with different colours using a Jiffy marker.  That way, when I set the lines, I have a visual indication of how the bottom contour is shaped.  It is super quick and effective which can be important when you’re working outside with bare hands.

Gord: Given that burbot have great senses of smell and taste, is chumming or baiting [where legal] a viable option to attract the fish to a specific area?

The most spectacular example I’ve experienced was when my, brother, Jason, and I were walleye fishing at first-ice and the burbot were outcompeting the walleye for our jigs.  We switched into night-mode and dawned our headlamps. I was doing well in one hole using shiner heads on my jig and chumming with the bodies  Upon unhooking a nice keeper burbot, I noticed the water in my hole “jump” out of the corner of my eye. I stood over the hole and watched a jumbo ‘burb plunging in and out, eating the floaters that hadn’t sunk. I caught that fish on the next drop!

The parts of the ciscoes that I don’t cut into butterfly steaks, I cut into finger-length pieces to chum the immediate area. During the pre-spawn portion of the burbot season, the most consistent location for tracking them down is the current areas, created by necked-down channels between two lakes, or a saddle area between two islands near a current area.  This is the most difficult time of the season to target burbot and chumming an area greatly increases your success.

If I chum an area before I go home, I expect to catch a sumo burbot, stuffed with chum, immediately the next morning.  If you are fortunate enough to fish an area for several days in a row, you will find that you can slowly pull numbers of burbot into your area by chumming cut ciscoe (or sardines and shiners) for an extended period of time.

At last ice, chumming doesn’t seem to positively affect the fish as their primary purpose for being on the shoal is to spawn and ward off egg-stealing ciscoes and perch.

When pre-chumming is not an option, you can shorten your burbot search by always using prime, plentiful bait as well as a powerful scent on you lures.  I use PRO-CURE Bait Scents on every bait I fish, no matter what the species, every day of the year.

For burbot, I’ve found specialty products with crayfish scent, to be the top option.  The one product I’ve had consistent success with for burbot – even on plain plastic bodies – is PRO-CURE Garlic Crawfish Super Gel.  In one word, it is deadly.  But potent, so make sure you keep it in a ZipLoc bag or your wife will make you sleep in the garage! 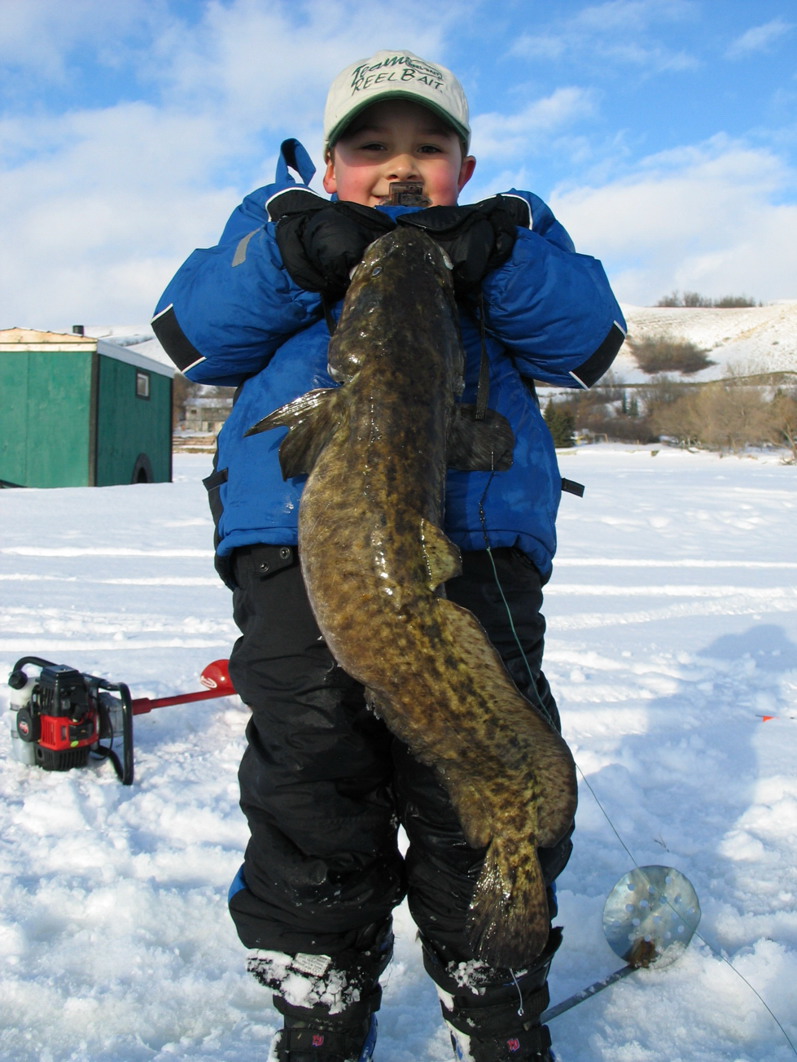 Gord: How big was your biggest ever burbot, Jeff, and what do you consider is a “good day,” in terms of numbers caught?

Jeff: When we are on an aggressive group of burbot, it is like catching perch, although, perch don’t fight for several minutes! Fifty fish is a reasonable expectation when the bite is patterned and the majority of fish are just beginning to spawn.My personal best burbot was 40” inches long and in the mid-teens, weight-wise.  I got a quick picture and let it go, as I was fishing a walleye tournament.  Spinner harnesses for monster ‘burbs – the final frontier.

Gord: Any final thoughts, comments, instructions, Jeff, that you’d like to leave with Outdoor Canada readers?

Jeff: Only to say thanks, Gord, for letting me share my tips, tactics and, hopefully, my passion for the most underrated predator in Canadian waters.

Burbot can feed effectively, 24 hours a day, in any water type and from the bottom of the food chain—on eggs and fry—and then, just as easily switch to the top-shelf items, chasing open water ciscoes and even char in some environments.  While they’re perhaps not stunningly beautiful, like a brown trout in fall colours, to me, beauty is only skin deep and the wonderment of these little-understood codfish captures my imagination whenever I cross paths with them on the ice.