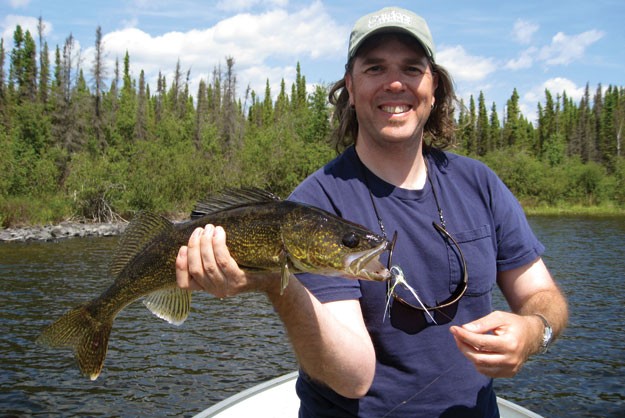 Catching ‘Eyes On the Fly

I caught my first walleye more than 30 years ago when I was a teenager, and it was an honest 10-pounder—I know because I weighed it on a bathroom scale right there on the shores of the Mississippi River in Almonte, Ontario, a half-hour west of Ottawa.

A gape-mouthed, marble-eyed monster with fearsome dentition, it looked almost prehistoric. And because it was so much bigger than any other fish I’d landed up to then, it made a powerful impression on me. I fell in love, and quickly added walleye to my short list of preferred sportfish, the other entries being largemouth and smallmouth bass, which, while easier to catch, were less spectacular in my youthful mind.

When I took up fly fishing years later, however, walleye dropped off my radar. Between chasing brownies, brookies and ’bows, I’d still occasionally pop for bass—primo sport in anyone’s books—but somehow walleye got lost in the shuffle. Since they didn’t rise to dry flies, and they hung in the deep water where they couldn’t be effectively targeted with a fl y rod, what was the point?

I was, as it turned out, hugely mistaken. I’ve since discovered that walleye will not only take flies, they’ll often take them better than they will crankbaits, jigs, spinners, spoons, soft-plastics or even live bait. When you think about it, that shouldn’t come as a surprise: of all of Canada’s gamefish, walleye have the slowest, softest bite, and unless they’re really active, they won’t aggressively chase fast-moving baits. And no lure can be presented more slowly, gently and enticingly than a fly.

The Time and Place

As for the complaint that walleye are typically too deep to be fi shed with flies, there’s some truth to that, but also some easy workarounds. Even with fastsinking lines, 15 feet is about the maximum depth one can effectively present a fly; if the fi sh are hunkered down deeper than that, you’re better off targeting them with spinning gear.

But walleye will also rise up in the water column and feed closer to the surface at dawn and dusk. And in the fall, when the water temperature cools and the sun hits the waves at a slant and doesn’t penetrate quite as deeply, the walleye will often be actively feeding no farther down than five to six feet.

Under this scenario, rig up a 6-weight rod with fast-sinking line and a four- to five-foot fluorocarbon leader—the short leader will allow the weight of the line to quickly drag your fl y down to the desired depth and keep it there.

As for flies, a range of leech and minnow patterns between three and four inches long is ideal. My favourite is an egg-sucking leech with a three-inch black body and a big red egg up front. Likewise, minnow patterns that have a bit of red flash in their construction work great. Walleye like the colour red, and even adding a few strands of red fl ash to the back of a streamer can make a difference.

Fire up the boat just as the sun’s starting to cast shadows on the water and head toward the nearest rocky shoal, sunken weedbed, steeply banked shoreline or island—anywhere that affords good transition points between deep and shallow water. Cast your fly parallel to the structure and let it sink for a few seconds. Work it back to the boat using long, slow strips, along with frequent pauses. Then get ready to set the hook.