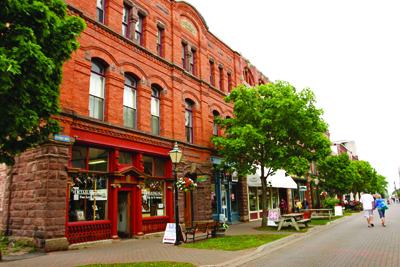 This is not the place to be if you’re a big-game hunter, since the largest four-legged creature you’re likely to encounter a field these days is a coyote. For the small-game hunter, however, Charlottetown and environs are as good as it gets. The province’s waterfowl hunting, in particular, is legendary. Straddling the Atlantic Flyway’s primary corridor, the island is a major staging area for Canada geese—come late September and early October, hundreds of thousands of honkers settle into the fields to gorge themselves on potatoes, barley, soybean and corn. Though they take second billing, puddle ducks are even more numerous. Then there’s snipe along the foreshore, flights of woodcock in the alder thickets, ruffies in the woodlots and Hungarian partridge in the fields. Charlottetown is the most feasible base for a hunter, since you’re never more than two hours from the most distant point of the island, with most hunting areas just a short jaunt from home base. As the provincial capital, the city provides all the amenities of a big centre but with a relaxed pace. And while the island is now connected to the mainland via the Confederation Bridge, Charlottetown Airport is close at hand with flights to both national and international destinations. Two Charlottetown shops—Island Guns and Gear and Savage Harbour Arms—cater to hunters and provide gunsmith services. Big-box stores in the city also provide basic hunting supplies.