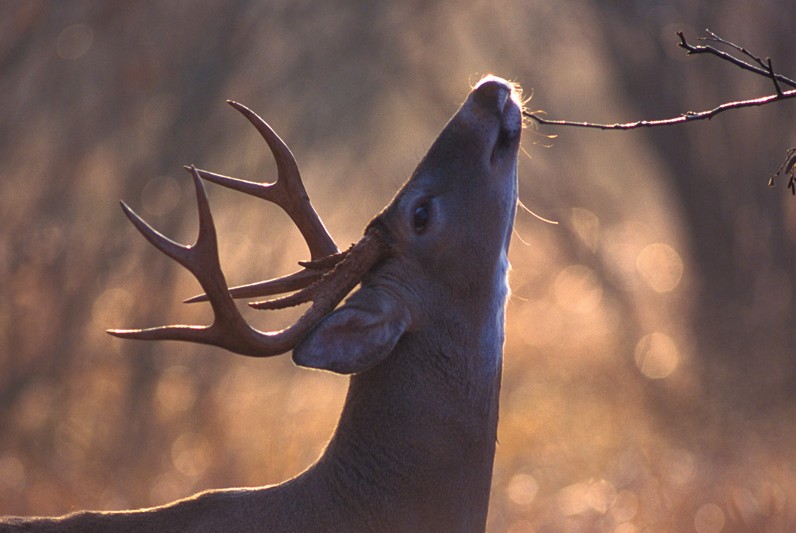 Deer don’t live in large social groups. Instead, does often band together in small matriarchal groups, while bucks join bachelor clubs. They stay in these groupings—typically limited to four to six individuals—throughout most of the year. As a result, most deer don’t come into regular direct contact with one another, relying instead on pheromones to communicate their mood, location, territorial dominance and sexual readiness.

During the rut, does may stay in heat for a couple of days, but they’re only fertile for about 24 hours. So those big bucks that have patiently waited for 11 months don’t have time to waste to randomly scour the countryside searching for mates. To maximize efficiency during this frenzied reproductive phase, deer have created a complex scent communication system of scrapes, licking branches and rubs, where their pheromones have been deposited from their tarsal, forehead and preorbital glands.

Tarsals are the most important deer glands during the fall rut. Covered with dark, urine-stained tufts of raised hair, tarsals are found halfway up the back of each hind leg. A buck will constantly urinate on these glands to create a distinctive musky odour by hunching its back and pressing its rear legs together. This is called rub-urination.

Every time a buck makes a scrape, he’ll rub-urinate, depositing the musky pheromones from his tarsal glands onto the freshly pawed earth. When other deer discover this signpost, they can identify the maker, as well as assess his health and dominance.

If a doe in heat finds a scrape that has an appealing scent, she’ll hang around, waiting for the maker to return. An intrigued doe will even urinate into the scrape herself to entice a desirable buck even further.

During the pre-rut, rut and post-rut, bucks will check and freshen the scrapes in the core of their home range more frequently than those they’ve made along the perimeter-as long as they’re not already tending to a doe in heat. If you find a spot where there are several scrapes within sight of one another, you’ve arrived in active buck territory.

The location where a buck chooses to make a scrape is always dictated by the presence of an appealing overhanging branch, approximately five feet above the ground. Known as licking branches, these limbs should really be called nibbling branches because the buck chews off the tip of the branch with his front teeth. He then rubs his face on the wet nub, depositing pheromone secretions from his forehead and preorbital glands, found near the eye pit toward the nose.

A buck will always create the licking branch first, then paw the ground below and rub-urinate on the fresh earth. Combined, the licking branch and the scrape are the whitetail’s primary scent communication post during mating season.