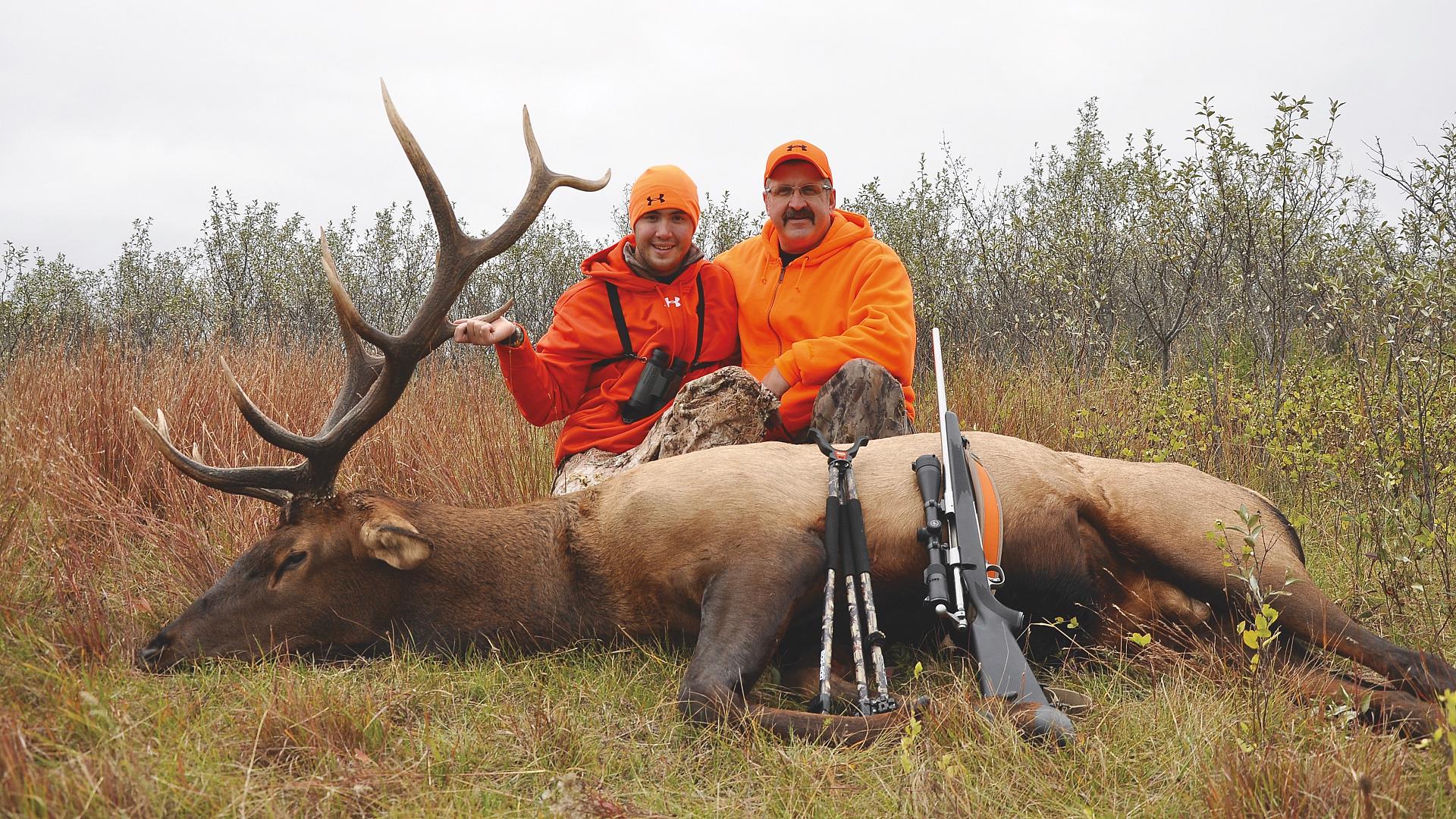 Bugles in the Forecast

For a successful elk hunt, you need to keep your eyes on the skies

Weather can have a major impact on the outcome of an elk hunt—and how you go about trying to trick a big bull into range. Elk react differently to various weather conditions, changing their habits and movements as the forecast changes. Warm weather generally suppresses their movements, for example, reducing their daytime activity. On the flipside, cold weather typically spurs on activity. Rain, wind and snow can also play a role. Here’s what you need to know about the relationship between elk and weather, and why you should always keep close tabs on the forecast.

Many western jurisdictions offer an early elk season, which typically runs from mid-August through September. During this time frame, hunters can experience a variety of weather conditions, from scorching, summer-like days with temperatures exceeding 30°C to heavy overnight frosts and daytime highs barely cracking the freezing mark.

Although the rut may come into full swing during this period, hot weather will make for tough hunting. The heat suppresses daytime elk activity, and the animals remain bedded for long periods. Instead of fighting, searching for cows or breeding, bulls will lay low in thick timber areas, taking advantage of the shade and cooler temperatures. They’ll also key in on damp or wet areas to find reprieve from the heat.

Since elk won’t travel far during an early-season heat wave, the best tactic is to set up at first and last light near a wallow, marshy area, beaver dam or trail that passes through thick brush near a bedding site.

Things change dramatically when temperatures drop in late summer and early fall. The nip in the air seems to energize elk, keeping them active throughout much of the day. During the pre-rut period, bull elk will be on the move to gather a harem of cows, cruising feeding areas, meadows and deep-cover bedding areas.

Now’s the time to listen closely, as some bulls will become vocal and periodically bugle. If you hear a bugle, call back. Just keep in mind that while pre-rut bulls will answer back, they’re often reluctant to come to a call. However, you may be able to sneak in on a bugling bull and get a shooting opportunity.

If you’re determined to get a bull to come in on a cold pre-rut day, try cow calling while remaining stationary or moving slowly. With bulls on the move and searching out cows, there’s a chance an active one will hear your calls and come looking to find the supposed cow.

During the rut, a cold day or frosty morning can produce the hunt of a lifetime, with a bull responding to challenging bugles and moving in tight, looking to fight. Cow calls under these conditions can also be very productive, as both satellite and herd bulls will respond to such calls.

Just how key is the temperature when it comes hunting to success? A perfect example happened several seasons ago during the peak of the rut. My son and I had been hunting hard for almost a week under hot conditions, but for all our efforts, we’d only seen one cow. While we never heard bugling, we saw fresh sign every day, telling us we were in the right area. Our luck changed overnight when a major cold front rolled in, bringing heavy rains and frigid weather.

The following dawn was cold and overcast. Unbelievably, at high noon, we encountered a six-by-six herd bull putting the run on a satellite bull that was trying to steal a cow from a small herd feeding in a meadow. As the big bull chased the smaller elk up a hill and out of sight, we moved in closer to the cows. When the big bull returned, my son filled his tag. Had the weather remained hot, chances are we would have never experienced that incredible spectacle, let alone harvested a huge bull in the middle of the day.

In regions with a late elk season, hunts typically take place in November and December. During this time, elk are preparing for winter and are focused on feeding. Under stable weather conditions, they’ll move from bedding areas to feeding areas late in the afternoon, then return to the bedding areas early in the morning. Typically, these elk have already experienced some hunting pressure, so they’ll bed down several kilometres from their feeding areas, often in hard-to-reach spots away from roads and trails.

If the weather turns bitterly cold in November or December, elk will need to feed for longer periods, and will turn to higher-protein foods. In areas with corn, for example, elk will travel for kilometres to key in on it. They may also move to pea fields, hayfields and even bale stacks.

While it may be possible to catch a bull out in the open, you’ll have a much better chance of success by positioning yourself along the travel route between the bedding and feeding areas. To do this, find a trail entering or exiting a feeding location, then follow it back into the bush and set up an ambush at a prime location.

During extreme cold, elk will head to their feeding areas much earlier in the afternoon and stay until much later in the morning. They’ll also bed closer to their feeding location, conserving energy by spending less time travelling and more time eating. Under these conditions, hunters can sit over trails quite close to the feeding areas and expect to see action earlier in the evenings and later in the mornings.

It’s also possible to hunt right in the feeding area, although that’s not my preferred tactic. Instead, I try to find a trail close to the food source and hunt the elk as they travel along it. That way, if the wind swirls or you mess up and get busted, the elk will continue to chow down in the same field—they’ll just take a different route to get there. If you run the elk off the feeding area itself, however, they’ll likely move to a completely different food source, taking you days to figure out where they’ve gone.

And by then, the weather may have different plans for both you and your quarry.

Regina outdoor writer Mike Hungle has been hunting elk for over 20 years.

Precipitation and wind also influence elk behaviour, once again playing a role in whether you connect with a big bull.

A light rain seems to have little impact on elk, and they’ll go about their normal daily routine. On the other hand, a heavy rain will suppress elk activity, often prompting the animals to bed down in thick underbrush or under the shelter of evergreens. After a heavy rain, elk will usually get up and move around, making it a good time to fill your tag.

Elk generally bed down in thick cover during heavy snowstorms, and stay there until the snow lets up. When this happens, it’s possible to quietly still-hunt and catch a bull in his bed. During an actual blizzard, elk will again hunker down for the duration; you should do the same, and stay safe in camp. But when the storm starts to wane, head for a feeding area—the elk will soon break cover and head out to feed. Heavy snowfall can also force elk to migrate to areas with less snow. Elk in alpine regions will move to lower elevations, for example, while elk in heavily forested areas will move closer to agricultural lands.

Elk are not bothered by light to moderate breezes; they use the wind to help them travel safely between their feeding and bedding areas. They also prefer to bed and feed in open, windswept areas where they can see and smell predators from a long distance away, and quickly flee if they sense danger. While bedded, they’ll often lie with the wind at their backs, looking downwind for any potential danger they can’t otherwise smell. In hilly terrain, elk will bed down in areas where the prevailing thermals travel. But when there’s swirling or high winds, they become skittish.