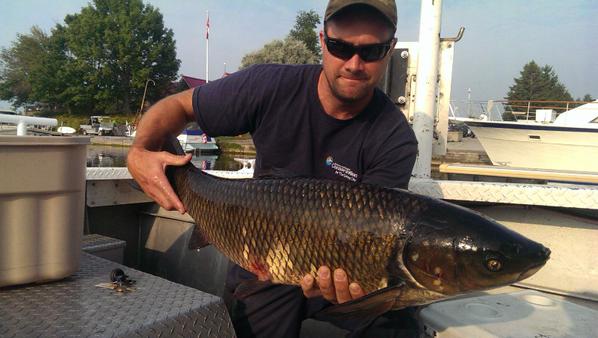 In my last Outdoor Canada, On The Water Online blog, Rebecca D’Orazio gave me the lowdown on the clear and present danger posed to Canadian angling by invasive grass carp. D’Orazio is the  Aquatic Invasive Species Specialist with the Invasive Species Centre in Sault Ste. Marie, Ontario, and she explained that grass carp were imported into the U.S. as biological control agents, then escaped their holding ponds when the Mississippi River flooded. The grass carp have thrived in the wild ever since, expanded their range and steadily moved northward.

And oh, yes—they are aquatic weed-eating machines, capable of chewing up precious chara, cabbage and coontail vegetation at an almost unimaginable rate. They also grow extremely large, very quickly, reaching sizes so big—as much as four feet in length and 80 pounds in weight—that no native species can predate them, to control the population.

Listening the D’Orazio explain the growth dynamics of the fish, it sounded like grass carp would find almost any Canadian water where the common carp already exits, such as the Kawartha Lakes, Muskoka Lakes, Lake Winnipeg and Lake Mountain Lake, to their liking.

“It is absolutely possible,” she said. “While common carp are also invasive, they are not one of the four species that we call Asian carp. Grass carp are extremely adaptable. Risk assessments suggest that they could easily survive in Canadian waters. And climate change is playing a huge role in the spread of invasive species. Increasing temperatures would increase the suitability of habitats for grass carp and allow for increased development and spawning success. That would mean rapid population growth.”

According to D’Orazio, grass carp are already reproducing successfully in at least two American tributaries of Lake Erie: the Maumee and Sandusky Rivers. So the Canadian side of that Great Lake is where everyone’s eyes are now focussed.  But the entire Great Lakes system is at risk, considering that Fisheries and Oceans Canada and other natural resource agencies have captured grass carp in every Great Lake except Lake Superior.

Is there anything anglers—who are out on the water daily—can do to assist the teams trying to control the spread of grass carp? “Anglers can help immensely by learning how to identify grass carp and then reporting any suspected sighting,” says D’Orazio. “We need to be on the lookout for grass carp throughout the Great Lakes basin.

“The key identification features of Asian carp are their eye placement, dorsal fin and lack of barbels. All four species lack barbels and have short dorsal fins. Grass carp and black carp have eyes placed in the middle of their heads. Bighead carp and silver carp have eyes positioned below the middle of their head, which almost makes them look like they’re swimming upside down.

“We have a great resource on www.asiancarp.ca called Confused with Carp that outlines the differences between Asian carp and common look-a-like species. There’s also a baitfish edition of this resource that will help anglers ensure that they aren’t using Asian carp for bait when they buy or trap minnows.

”Lastly, if you suspect that you’ve captured any one of the four Asian carp species, please report it to the Ontario Invading Species Hotline (1-800-563-7711) or EDDMapS (via the app or www.eddmaps.org).”

Another resource that D’Orazio showed me is THIS ONE that will lead you, step-by-step through the process of determining whether the fish you’ve caught or found floating in the water is a grass carp. It goes without saying, as well, that you shouldn’t release it back into the lake, but rather take photos of it from a variety of angles, so the fisheries folks can properly ID it. Then record that spot as a waypoint on your chartplotter or phone and call the hotline or EDDMapS.

D’Orazio says it is also important not to damage the head and eyes of any grass carp you suspect you’ve caught, since scientists use the head and eyes for detailed analysis. Instead, pack it in a cooler with the head above the ice. Then Fisheries and Oceans Canada will contact you and arrange for its collection