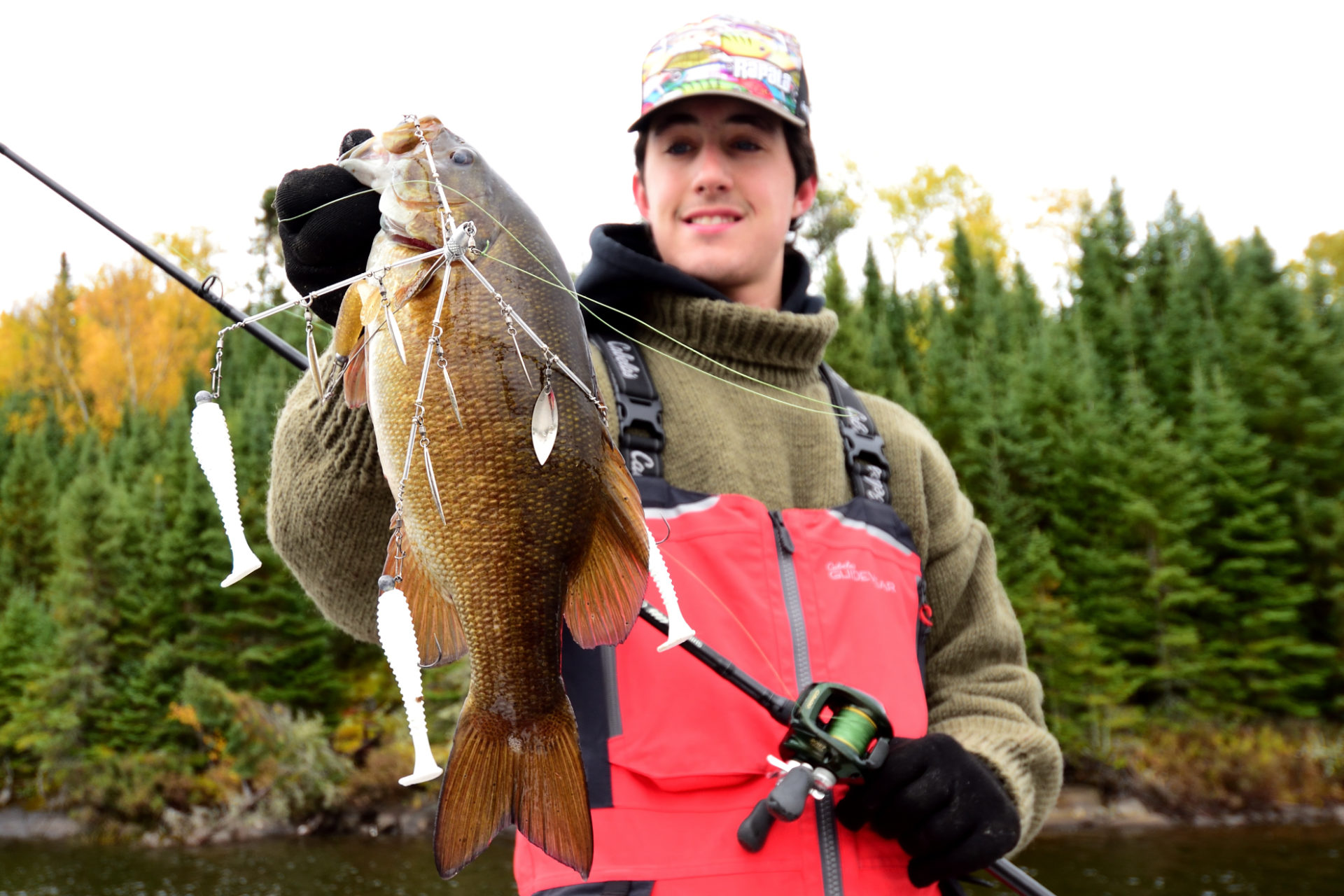 These multi-lure rigs may be ungainly, but they draw hits, even in cold water

Even if there’s no rain in the forecast, you could be forgiven for telling your fishing partner not to forget the umbrella. Not that I’d ever have to remind my grandson Liam. He is an umbrella-rig aficionado and would never head out on the water for late-season smallmouths without his favourite fall bass fishing lure. Or should I say lures, because the standard umbrella rig comes with three, four or more relatively thick wire arms (just like the frame of an umbrella), terminating in rather crude-looking snap-swivels.

Most anglers attach a 1/8th- to 3/8th-ounce jig adorned with a four-, five- or six-inch soft-plastic swimbait to each of the snaps. So, when you cast out the rig and reel it back to the boat, it looks like a school of ciscoes, smelt, shiners or shad.

Bassmaster Elite angler Paul Elias was the first to stun the bass-fishing world with the technique when he won a major event, spurring so many wannabe pros to adopt the technique that it was quickly banned by many circuits. It seems that too many wet-behind-the-ears rookies were beating the big-name pros, and it didn’t sit well with them.

Of course, none of that matters if you’re fun-fishing for smallmouths right now, with the water temperature hovering in the 50° F (15° C) range. And when it chills down even further in the days ahead, the umbrella-rig bite is only going to get better.

It is worth mentioning, too, that catching multiple fish on a single cast isn’t the primary purpose of the umbrella rig, although no one complains when that happens. You’d also think that with so many wires (and often spinners) cutting through the water that the rigs would spook the fish, but it isn’t the case. They are totally mesmerized by the trailing swimbaits and strike them with abandon.

And while the clumsy-looking contraptions excel in my Northwestern Ontario neck of the woods for smallmouths, where four hook umbrella rigs are legal, we should never forget that they may be even better for largemouth bass.

I was reminded of this just the other day when I was watching good friend Doug Stange, host of the In-Fisherman television show catching big bucketmouths with them.  It was so funny, too, because having spent enough time in a boat with Doug, I could tell that he really didn’t want to be throwing the things. Let’s face it, they can tire you out. But Doug went along the bank casting standard fall presentations and catching nothing, only to circle back with an umbrella rig and clean house. So as he demonstrated, some days you just have to go with the program. 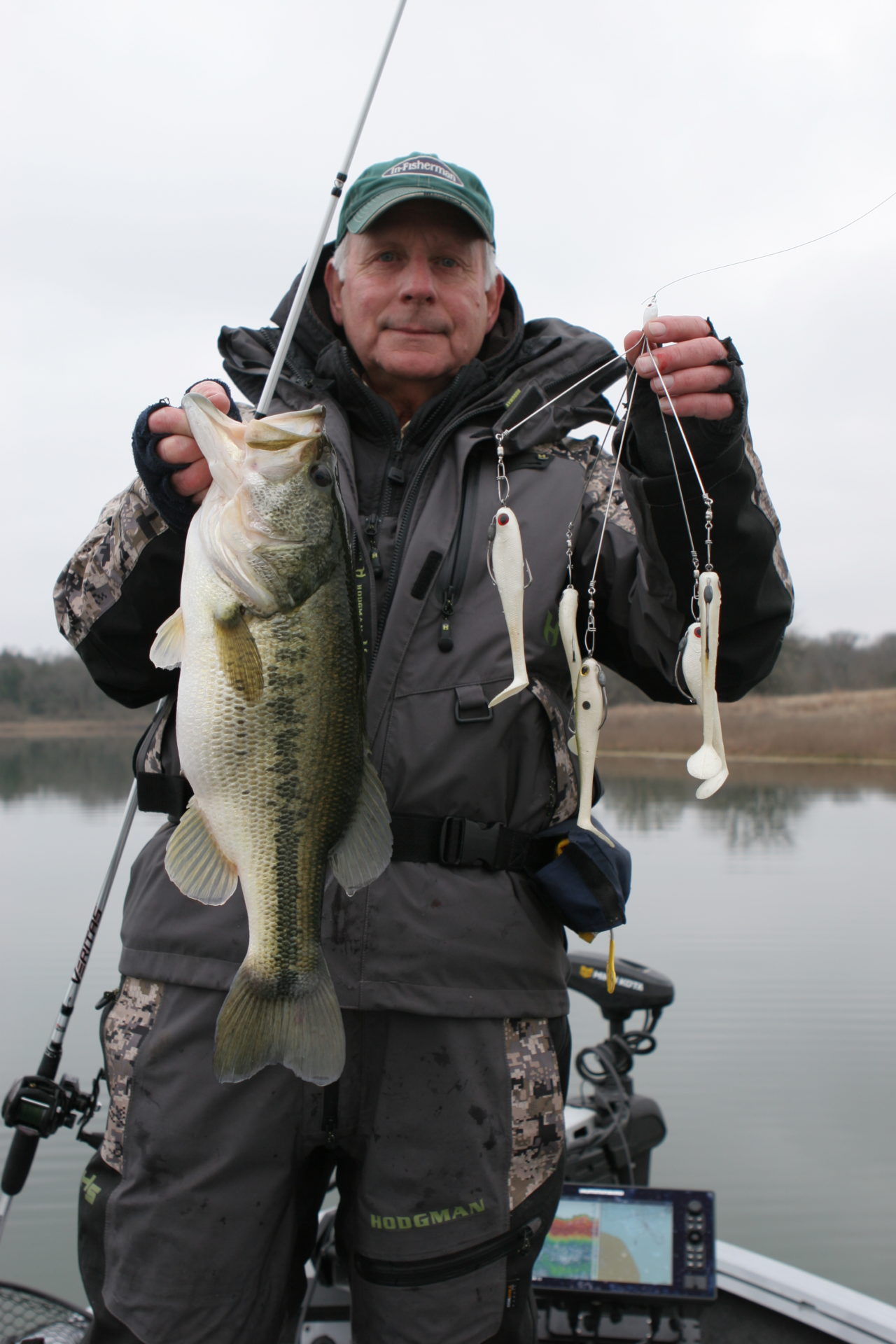 “We seem to travel with cold fronts,” Doug chuckled when I asked him about the intriguing episode. “This was the third week of November and the morning started out with 28°F temperatures.  I was fishing a quarter-mile long creek arm that is about 60 to 70 yards wide from beginning to end. There is a creek channel that runs down the arm, with the channel tending to be closer to one shore than the other, with a short flat on one side and a wider flat on the other. The flats have pot-holes and high points with some emergent, and a lot of submerged vegetation. There is also some cover up and down the channel edges.

“I started out casting cranks across the flats, along with Grass Pigs on weighted swimbait hooks. Then I fished a skirted jig along the channel edges. It took me an hour to get to the back of the creek arm and I didn’t get a bite. It was like the Dead Sea.

“Then, as I slowly motored down the channel to get out of the tail end, I’d occasionally spook a school of shad along the edge and push them up onto the flat.  As the shad spooked away, in every instance I’d see a bass boil up from the bottom and hit them.”

Picking up an umbrella rig, Stange started casting and the rest is television history. “It was like turning on a light switch,” he says. “The fish were programmed to bite anytime a school of shad got nearby. And nothing else would get them to respond.”