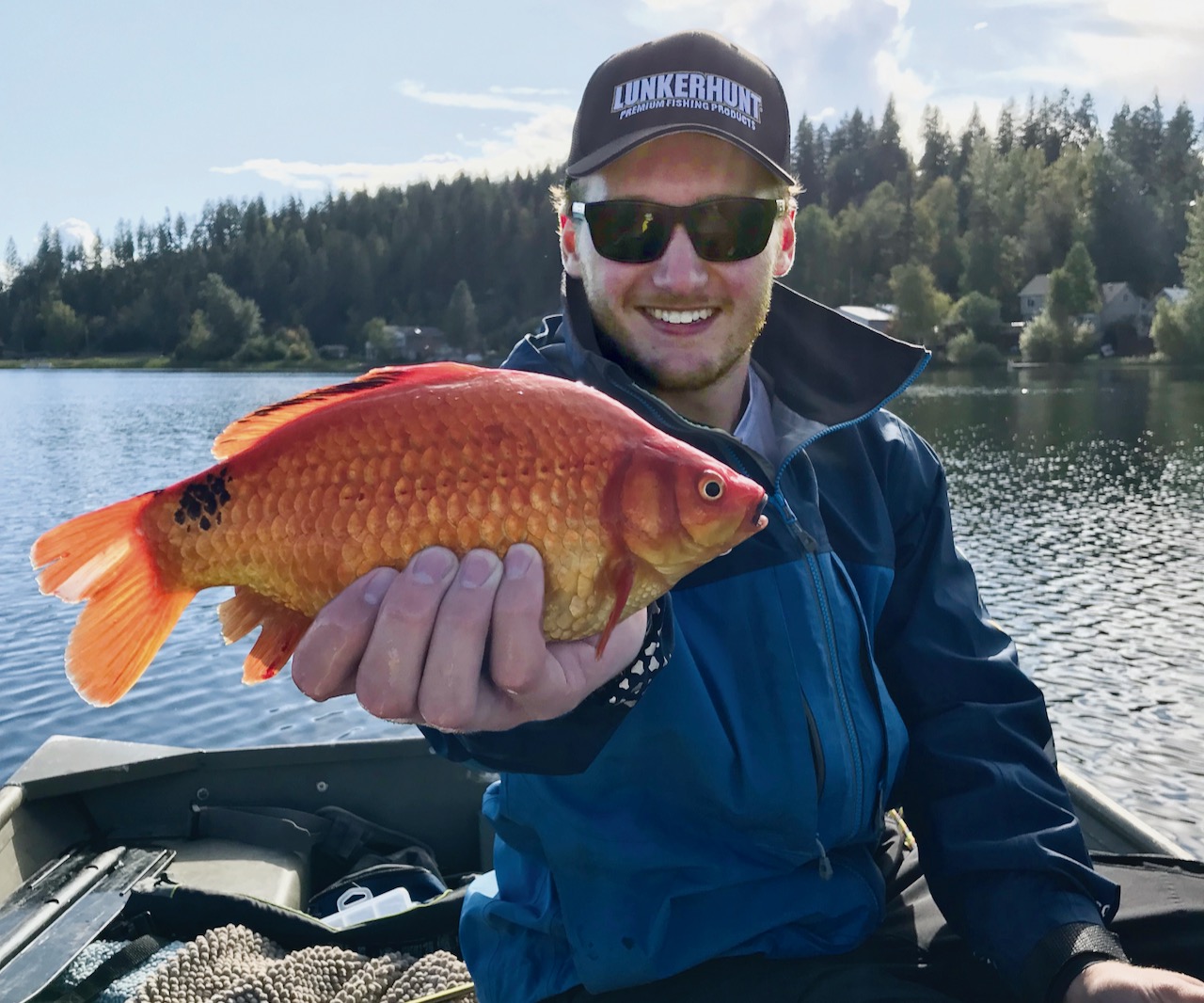 The author with a B.C. goldfish
News

Goldfish are invading our waterways, and they must be stopped!!!

Although most of the buzz lately about invasive species involves Asian carp and murder hornets, one of the most prevalent and destructive creatures spreading across the country may also be swimming around in your home.

Carassius auratus, more commonly known as goldfish, have been inhabiting fishbowls and backyard ponds since they were first domesticated as pets 1,000 years ago in China. Despite that seemingly harmless origin, these orange fish have become giant problems for our fisheries, making their way into lakes and rivers across the land via suburban ponds and toilet bowl.

While they may seem harmless in a home aquarium, goldfish have a surprisingly large appetite. Released into the wild, they will spend most of their time foraging for snails, small insects, fish eggs and even young fish. Those feeding habits, coupled with fast growth rates and semi-annual spawning, make goldfish fierce competitors with native fish species that rely on the same food sources.

Along with outcompeting native species, these fish can also adversely affect aquatic vegetation as they dig for snails and stir up sediment. When local goldfish populations become large enough, in fact, this feeding behaviour can begin clouding up shallow areas, resulting in stunted vegetation growth and changes to the bottom composition.

Toilet bowls are often the first things that come to mind when discussing how goldfish get into in our lakes, conjuring up images of Finding Nemo escapes and courageous journeys through urban sewage systems. While this may seem like something that could be debunked, the idea that people are flushing goldfish actually has some validity, especially in areas that still dump raw sewage. This is most notable in Lake Ontario, where the goldfish population has now reached an estimated 50 million.

While flushing may account for a small number of goldfish invasions, the more common culprit is the dumping of live fish. Stormwater ponds are one of the main places where irresponsible people release their unwanted finned pets. In 2017, for example, more than 45,000 goldfish—nearly two tonnes of fish—were culled from two stormwater facilities in St. Albert, Alberta. And just last spring in Port Perry, Ontario, thousands of goldfish were discovered in a pond, where high water would have allowed the fish to escape via a feeder creek into Lake Scugog and the Kawartha Lakes system.

This threat of spreading to other lakes is perhaps most prevalent in B.C. Two years ago, for example, Lost Lake was closed to sportfishing while biologists assessed a goldfish infestation that threatened to contaminate the surrounding Skeena watershed, one of the world’s most important salmon fisheries. While that may be the most notable and dire example of late, the province is no stranger to goldfish infestations—there are currently self-sustaining populations all over the Lower Mainland, Vancouver Island and even the northern Interior.

WHAT YOU CAN DO

To avoid contributing to the problem, the best thing you can do is dispose of your unwanted or dead goldfish properly. In most situations, burying the fish is the best option. Alternatively, many pet stores will gladly accept live fish as a donation.

Should you discover goldfish in a pond, lake or river, be sure to notify your local conservation authority. Even if the fish are limited to seemingly unconnected urban ponds, it’s still a good idea to make resource managers aware of their presence. With high water or flash flooding, there’s the potential for the fish to spread to more vulnerable waters.

Finally, if you happen to catch a goldfish while fishing, simply bonk it on the head and toss it on shore. If that seems wasteful to you, eating them is also an option, of course. I can’t speak to that personally, however—the thought of these blemish-ridden fish swimming around in sewage and stormwater has been enough to keep me away from that experiment.