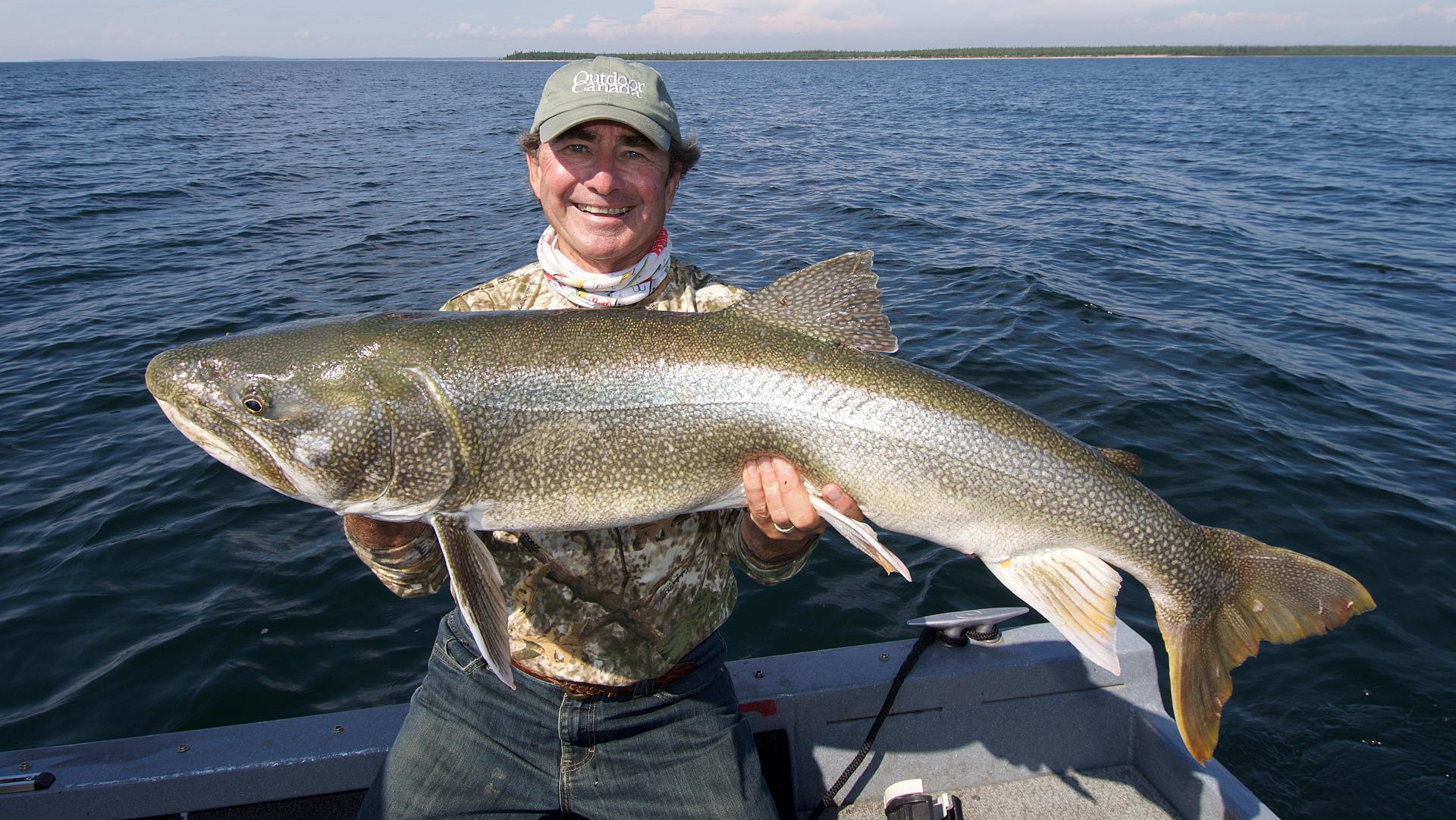 Having spawned the previous autumn, lake trout have only one thing on their minds when the ice finally melts and the water warms up in the spring—filling their bellies with soft snacks such as suckers, smelts and shiners. And it helps that these menu items congregate in small, well-defined parts of the lake, often in massive numbers, preparing to spawn.

Then there’s the warming of the lake’s surface layer of water to 4°C. At this magical point, the water becomes denser and slowly settles to the bottom, circulating and restoring oxygen to the lower levels of the lake. Scientists call this “spring turnover,” but I think of it as the best time of the year to fish for lake trout.

Since lakers prefer water temperatures between 9°C and 12°C—among the coldest in the freshwater fish world—they follow the progression of spring turnover like snowbirds flocking to Florida. And that’s when they’re the most accessible and easiest to catch.

The first place I always look is adjacent to any creek, stream or river flowing into the lake. Invariably, you’ll find a soft, fertile delta at the mouth, where the moving water deposits sand, silt, mud and detritus.

The stream itself is where you’ll find the suckers and shiners spawning, while the delta provides a smorgasbord of food for them afterwards. As a bonus, fall-spawning whitefish and ciscoes will also be drawn to the delta to gobble up minnows and insects, in turn attracting hungry lake trout.

Immediately after ice-out, therefore, I like to stake out my spots around primary and secondary points that lead into the shallow bays. Hungry wolf packs of trout patrol these underwater promontories and savagely attack the schools of forage that must pass by to reach the inflowing water.

How to target them

You may be surprised to learn that I prefer to cast rather than troll as soon as the lakes are free of ice. Indeed, it’s my favourite time of the year to catch lake trout from shore, preying on their penchant to patrol the points.

My favourite go-to lures at this time are 1/4- to 3/8-ounce white bucktail jigs and five-inch white, silver or grey swimbaits, such as BassMagnet Shift’R Shads, XZone Lures Swammers and Keitech Swing Impacts pinned to ReelBait Tournament Series Flasher Jigs of a similar weight.

I’ll cast out the swimbaits, let them plummet to the bottom, then slowly wind them back to the boat or shore using a do-nothing retrieve. I work the bucktails more aggressively, on the other hand, quickly snapping them up, letting them fall back down, then popping them up again.

As the water continues to warm and the baitfish push their way into the creeks and streams, I’ll then troll silver, gold, white or grey crankbaits (Rapala Tail Dancers and Shad Raps), jerkbaits (Lucky Craft Pointer Minnows and Rapala X-Raps) and spoons (Williams Nipigons and Wablers).

Starting at the same primary points I was casting over at ice-out, I’ll troll into the bay with a long line trailing behind the boat. That way, any trout I might spook in the shallow, clear water has time to regroup after I pass. If I find the trout frequenting two- to three-foot depths, I’ll dig out the in-line planer boards to stealthfully direct my baits away from the boat.

Often toward early summer, you’ll see the water’s surface in the backs of the best bays dimpling like drops of rain. That’s thousands of four- to 10-inch-long ciscoes slurping hapless mayflies off the surface as they hatch and swim up from the bottom. This typically occurs during the evening of an otherwise beautiful sunny day.

When I discover such a surface disturbance confined to a small area, I’ll lower my Talon shallow-water anchor or put the Ultrex trolling motor on Spot Lock so I can hold the boat out on the edge. Then I’ll cast one of the bucktails or swimbaits into the ruckus, allowing it to settle for only a foot or so before beginning my retrieve. To the trout, this looks for all the world like a ciscoe with a target painted on its flank, and it drives them wild with glee. As it does me.