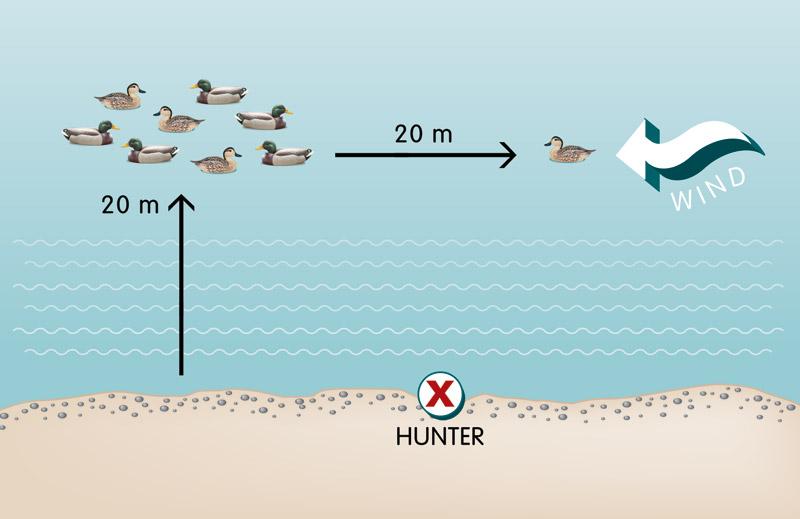 How to hunt late-season ducks

By the time duck season starts to wind down, mallards have had more metal whiz by them than a dead skunk on the highway, all of it coming from boat blinds, shore blinds and tall vegetation with decoys out front. These birds have earned their Ph.D. in survival. The number one lesson they’ve learned at Mallard U? Don’t stop at the decoys.

Late in the season, only diehard waterfowlers are still in the game. While that means there’s less competition for good hunting spots, traditional blind set-ups stand out like flies in a sugar bowl. And the ducks know the blinds might be hiding something dangerous, so they’ve learned to avoid them—no matter how tempting the decoy spread. That means you’ve got one option left: set up and hide out in the open.

1. Head for the shore

On the lakes where I hunt, I’ve noticed that late-season ducks stay well out from any shoreline with bulrushes or tall weeds. If there’s no tall vegetation for several metres back from the water, however, they’ll land or paddle in to within 20 metres of land. Since the open shoreline assures them there’s no danger, that’s exactly where you should hide in plain sight.

To do this, I choose an open section of shoreline the ducks have been using, or along a flyway, and place my decoys 20 metres from shore. Then I beach my boat or canoe and get it completely out of sight using camo and natural cover, even if it’s quite a distance from my spread. After walking back to my dekes, I sit on the beach doing my best impression of a stump. No stump has ever killed and eaten a duck, so the birds are fearless around them.

To become a stump, I sit on a folding canvas beach chair with a full backrest. It’s basically a lawn chair with three-inch legs, providing comfort all day long. The short legs keep me off the damp ground, but lower my profile to the right height. I wear a camo face mask, gloves and coat with a hood. The hood is essential because it hides the instantly recognizable human shape of a large round head on a slender neck, which otherwise is as obvious as a pumpkin on a fence post. A peaked cap under the hood keeps it from falling too low over my eyes.

I cover my legs and torso with a sheet of camo cloth, but keep my arms and shotgun uncovered. That way, when a target appears I don’t lose precious time uncovering them. As a right-hander, I sit with my left shoulder to the decoys, which enables me to swing the gun across the whole expanse of the waterfront.

The key trait of stumps is that they don’t move, so it’s essential to remain motionless. I try to use a camo pattern that matches the shore background, but I’ve found if I move as ducks are approaching, no matter what pattern I’m using, I get busted. If I don’t move, however, it doesn’t seem to matter what camo I wear—the birds will come in.

My shotgun has a non-camo matte finish, and it doesn’t tip off ducks, even when resting across my legs out in the open. I’ve had birds swim within eight metres of me without detecting my presence. If your shotgun has a glossy finish, I recommend covering it with a camo gun sock, as long as it doesn’t interfere with sighting or the action.

As for my retriever, I have her lie down beside me on a short leash, covered nose to tail with a scrap of burlap to keep her out of sight. The open weave of the burlap lets her see without being seen, and provides a bit of warmth. (If you don’t have a dog, get in a boat to pick up your ducks—do not go wading in deadly cold water.)

When setting up your decoy spread, place a single mallard hen 20 metres up the shore from the main spread, upwind if possible (see diagram below). To approaching ducks, it will appear as though the single bird has just arrived and is cautiously joining the group. The incoming ducks will often land with the single, because they’re just as cautious.

Choose a spot between the single decoy and the main spread. That way, you’ll be within range of ducks landing in either spot. I sit closer to the single bird because I use a mallard hen call, and ducks expect noise from her. I call when the birds are hundreds of metres out, but stay mute inside 100 metres because they can pinpoint the source of a call at close range—and they know a stump doesn’t sound like a duck.

Remember, if you don’t want to get stumped by late-season mallards, be a stump.

On some days, every duck on the lake prefers to sit in rafts hundreds of metres off shore. But if there’s any wind at all, the late-season hunter has one last chance to get within range.
I don’t have a layout boat or a sculling boat, but I have been able to drift close to flocks in my car topper.

I position the boat hundreds of metres upwind of the flock, far enough away that I don’t ruffle a single nervous feather, and line it up so the wind will push me toward the birds. Then I sit on the floor of the boat wearing a camo face mask and a hooded coat, with my eyes just above the gunnel. If I stay down, remain still and calculate the drift correctly, the ducks will often allow me to float within range.

When the time is right, I sit up and shoot. The human outline and movement are what make ducks nervous, but an empty boat moving imperceptibly closer doesn’t seem to trip the alarm. Always remember to wear a Personal Flotation Device, and don’t wear waders—all the ducks on the lake aren’t worth drowning for.

Two particular weather patterns can trigger fantastic late-season hunting. The first is a cold snap that ices over your hunting area’s ponds, marshes and swamps, but leaves the lakes and rivers open. This concentrates the ducks on the open water, so that’s where you’ll want to set up. The second pattern is a snowfall of four inches or more. This covers grain and corn stubble fields, sending the ducks to open water—and your set-up—for food and rest. If a cold snap and snowfall coincide, it’s a lateseason hunter’s sweetest dream come true.