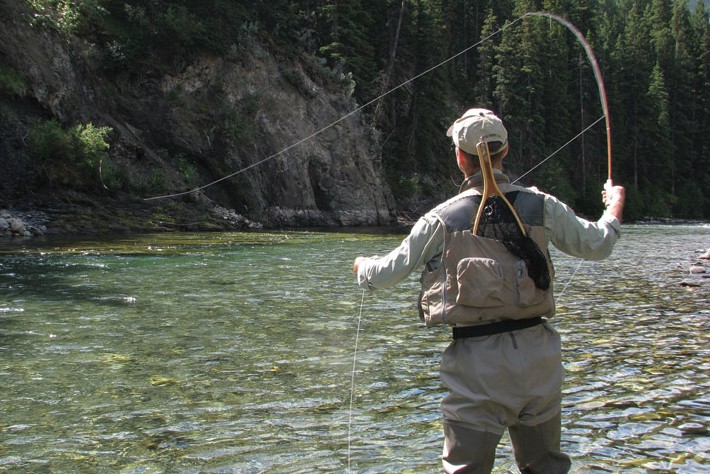 Spring is a great time to clean your tackle, plan trips and, most importantly, tune up your casting. But don’t wait until you’re on the water to fix the likes of that tailing loop problem you had last fall. Instead, head for the nearest park and try your hand at “straight-line tip travel,” the latest buzz in fly casting.

Essentially, straight-line tip travel means the rod tip should travel very nearly in a straight line on both the forward- and backcast to create tight, efficient loops—the foundation of all good fly casting. To achieve this, visualize the basic fly-casting stroke as having three distinct steps: a drag, a flick and a stop. This is a fresh way of thinking about casting, and because it reduces the basic casting stroke to three simple movements, it’s much easier for beginners to pick up. It also helps improve your casting with very little effort if you’re already an experienced fly-fisher. Here’s how it works.

To pick the line up off the water and make your backcast, start with the line straight out in front of you (it’s impossible to cast a line that’s slack) and the rod tip pointed low, toward the end of the line. Then drag the fly line up and back with the rod tip—but do it by drawing your casting hand up and back while keeping the rod tip low. This drag movement should extend only 12 to 18 inches, and be sure not to swing the rod tip upward yet.

As your drag stroke is finishing, and the end of the fly line is just about to come off the water, use your wrist to sharply flick the tip of the rod up and back, sending the line up and back over your shoulder. This is not a long, sweeping motion. Instead, it’s quick and short, and your wrist should be firm but not rigid. Different instructors refer to this part of the casting stroke as different things—the power stroke, power snap, micro-second wrist—but to me, it’s a flick, which the dictionary defines as a “sudden, sharp movement.”

After the flick powers your line up and back, all that’s left is the third part of the stroke, where you stop the rod. Don’t follow the line back—or worse, down—with the rod tip. Stop the rod completely and abruptly. This transfers the energy from the rod to the line, and keeps the loop tight. After stopping the rod, wait until the line has finished unrolling behind you and straightening out in the air. When that happens, the backcast is complete and it’s time to start the forward cast, following the same three steps: drag the line through the air behind you, flick your wrist forward and stop the rod—your line will then extend fully and drop beautifully onto the water.

This three-step method improves your casting in several ways: the drag gets the cast off to a smooth start and prevents you from applying power prematurely; the flick engages the rod tip and accelerates the line; and the stop helps form a tight loop, rather than a wide, saggy one that kills your cast. It also eliminates the standard “10 o’clock to two o’clock” rule, which suggests the rod tip should move in an arc like the hands of a clock—a recipe for wide loops and weak, sloppy casts.