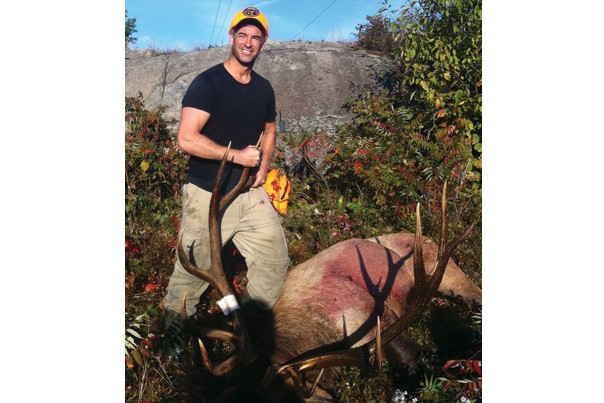 How to take an Ontario elk this season

With a 100-yard shot at 7:30 a.m. on September 19, 2011, Sandor Johnson took down a 1000-pound elk in the first official elk hunt in Ontario in 128 years. The big-racked ungulates had been reintroduced into the province in the late 1990s, and Johnson’s party was one of just 70 groups to receive a tag for last year’s inaugural hunt. Johnson, 42, is a lifelong hunter, but his chosen profession might surprise you: he’s one of the world’s top male fashion models, represented by the famous Ford Agency of New York City. Currently building a vineyard and winery near his home in Tweed, Ontario, Johnson plans to hang his elk mount—the headgear scored 335 Boone and Crockett—in his tasting room. Here are some lessons from his history-making hunt.

Call: As dawn broke, Johnson’s party heard the haunting sound of bulls bugling from the nearby forest. “Unlike my experience with deer and moose hunting, elk really respond to calling,” he says. After the hunters called, an elk bugled back immediately and began moving toward them. In fact, Johnson had to quickly skirt a beaver pond to be in position when the 1,000-pound bull appeared from the treeline.

Shoot: Johnson hunts big game with a single-shot, falling-block Browning .30-06, so when his elk came trotting out of the woods, he only had one shot. It was a tough shot, too, since the morning sun had rendered his red-dot scope useless. He credits his steady hand to the hundreds, maybe thousands, of hours spent plinking as a kid. “I grew up hunting barn rats in my grandfather’s granary, then graduated to deer and moose. But I’d still say my best preparation was all those pellet gun shooting contests as a kid with my family.”

Dress: Though their hair is long and rough, elk are not much different anatomically from other big ungulates, so dressing Johnson’s animal was fairly straightforward. The main challenge was environmental. “I can’t stress enough that you must get your elk out of the woods as quickly as you can,” he says. “It’s still warm in September, and though we dressed the animal and got it out rapidly, we unfortunately did suffer some spoilage, which is always disappointing.”

Adapt: Johnson hunts deer every November on his property, and says those skills applied directly to hunting elk. However, the early-autumn elk hunt in eastern Ontario posed one unexpected complication: leaves. Until you’re actually out there, he says, “You don’t realize how much of a difference [fall] foliage plays in spotting game and challenging your shot.” Ultimately, he concedes, the best remedy for this is experience. “There’s nothing like getting familiar with your firearm, and physically using it in the environment where you will actually hunt.”