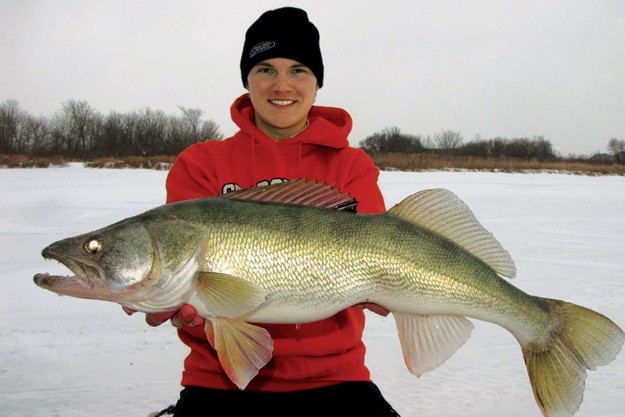 How to target and tackle winter walleye

Aaron Wiebe is certainly no stranger to catching big fish. A consistent top earner in the BountyFishing online tournament series, the Winnipeger most recently shared in the top prize at the 2012 Kenora Bass International. Wiebe’s appetite for fishing is so big, he’s working on his own TV show, Uncut Angling, set to launch on Wild TV in January. Promising viewers a “raw and real approach and perspective,” Wiebe intends to mix humour and action with practical advice in his new show. This winter, the 26-year-old will also be out on the hardwater—he’s just as adept at pulling monster walleye through the ice as  he is catching them on the open water.

Gear: Fishing without a flasher isn’t much fun, or effective, Wiebe says. “As the expression goes, ‘I’d rather turn around and go home than fish without my flasher.’ It’s completely true. If someone hasn’t fished with one, they have no idea. It’s an essential.” And the price is no longer prohibitive, he notes. “You can get a decent entry-level flasher for $250 or $300.”

Movement: Start the day with a mobile mindset, Wiebe advises. That means fishing fast and moving locations if the bite’s not on. If you have holes drilled in an elaborate spread ranging from 40 feet up to 15 feet over a large reef, for example, give each hole two minutes, then move on if nothing’s biting. As the day unfolds, he says, you’ll figure out if you need to slow down and move less. Wiebe also recommends drilling a manageable number of holes. “If you’re going to take the sweat and energy to cut a hole, you have to fish it.”

Strategy: To catch trophy walleye, you must be ready to target suspended fish. “It’s hard to break the mentality that you jig for walleye on the bottom,” Wiebe says. Instead, anglers should “respect” the entire water column. “Fish every little blip that comes on the screen, even the little flickers,” he says. “They might only be baitfish or a small fish coming through, but the fact that the food chain is up there using that part of the water column is a huge clue.” Once you get fish at a particular depth, pay a lot more attention to that part of the water column.

Bait: “I would never go fishing for walleye without a tub of minnows, but at the same time, there’s a fair majority of days when I don’t use them at all,” Wiebe says. For suspended fish, he finds artificial baits work the best. “A fish up high is typically an aggressive fish,” he says. “If it’s not swimming into your cone directly, a fish off to the side can often be called in with a rattle bait, jigging spoon or something with a lot of flash and action.”