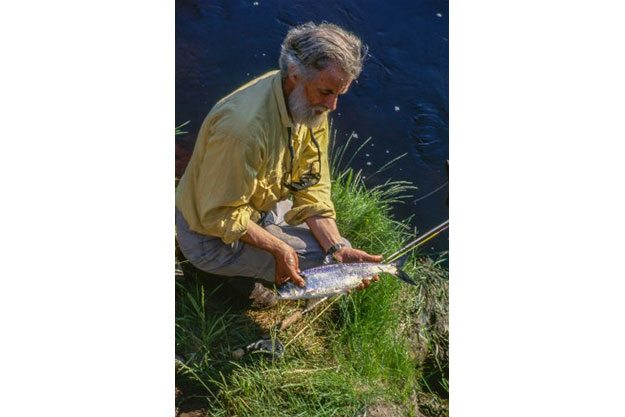 How to target hard-fighting shad

From his headquarters at Mountain Maple Lodge on the slopes of the Annapolis Valley’s South Mountain, Nova Scotia Master Guide Perry Munro has been showing anglers how to fish for American shad for decades. “I got into shad fishing as a way to teach novice sports how to hook and play a fish before graduating them to Atlantic salmon,” he says. Today, with the precipitous decline in salmon, shad have become a main attraction. Here’s how Munro targets this hard-fighting fish.

Shad are found throughout Eastern Canada, including many rivers flowing into the Bay of Fundy and the Gulf of St Lawrence. To find these anadromous fish, says Munro, look for shade. The deep inside of oxbow bends, water beneath overhanging trees, and deep pools are all potential hot spots. Seams can also be productive—sometimes you can simply swing a lure from side to side in a seam to attract strikes.

May and June are shad months. Exactly when they enter and leave the rivers depends on water temperature—around 18ºC at the run’s peak. “Mid-season is my favourite,” says Munro, adding that it’s the best time to land a five-pound-plus trophy. “The river is full and the big females have yet to spawn.” And while confident he can catch shad at any time of day, Munro supports the common belief that the best fishing is early and late in the day.

If you use spinning gear, Munro recommends a medium-action rod and reel spooled with eight-pound-test mono. Tie on a 1/32- to ¼-ounce shad dart jig; his favourite colours are chartreuse and fluorescent orange. If you’re a fly angler, a 6-weight rod with a floating line is your go-to set-up. Munro says to use a floating line and sinking leader set-up because it’s more flexible and offers better depth control than a sink-tip line. Effective fly patterns feature the same colour palette as the jigs and generally include a weighted bead or cone to get them down into the target zone. Another popular combination is red and white, for both darts and flies.

“If your fly or lure is swinging more than six inches above a shad’s head, you’re wasting your time,” Munro says. To get light darts into the target zone, attach a barrel swivel to the main line, then add a two-foot leader. On the same swivel eye, also attach a short dropper line to which you can add whatever splitshot is needed to get the dart down to where the shad are sitting. If you don’t occasionally hook the bottom, you’re probably not fishing deep enough. With a fly rod, occasionally vary the casting angle from down-and-across to 90 degrees across to alter the speed of the fly.