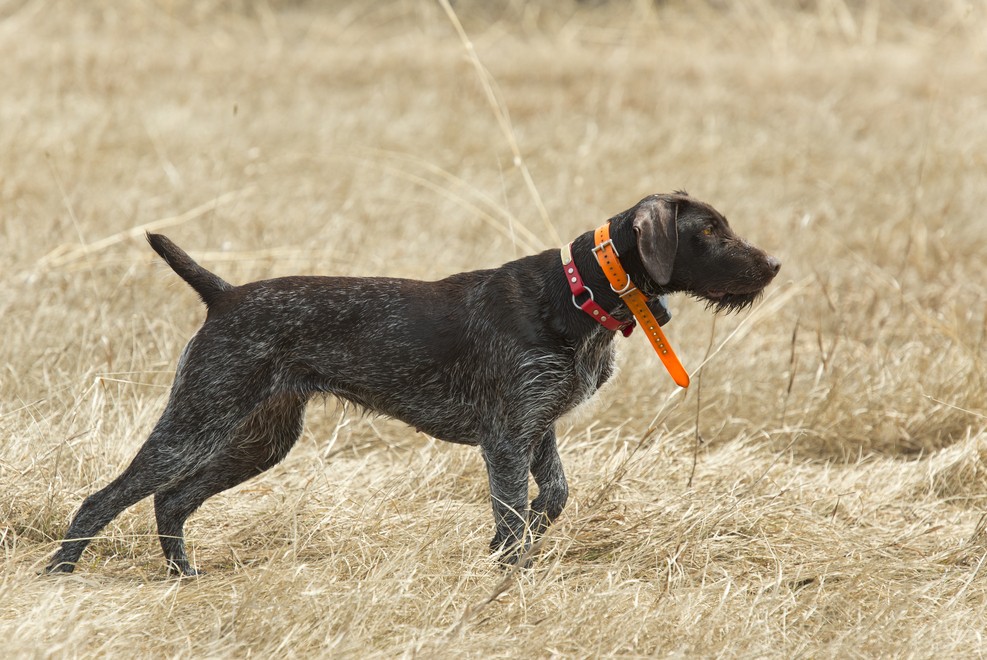 How to tune up your hunting dog

How to tune up your hunting dog

These tips will get Fido in top shape for hunting season

The dog is rigid, its muscles rippling and tight enough to hum. It leans into the point to get more bird scent into its nostrils, knowing that one more step will put the bird into flight. It’s the culminating moment for both the dog and the upland bird hunter—if you’ve properly prepared your pointer for the season at hand.

Following an eight-month layoff during the off-season, don’t expect a point- ing dog to just leap off the couch and perform at top level. At best, it will flush birds or fail to retrieve. At worst, you’ll end up with an injured dog. To avoid this, spend a month or so before the season begins getting your pointer primed for the physical challenges of covering thousands of acres in search of game birds.

A dog is only as good as its feet, which must be able to handle the tough ter- rain that game birds call home. Let your hunting buddy run on abrasive surfaces, such as gravel and grain stubble, similar to where it will hunt. That way, the dog’s pads will thicken and toughen up, and its foot ligaments will tone up for the strain of rough ground.

Run your dog on cool mornings and evenings in August and September to avoid the risk of overheating. Take lots of water for the dog to drink, and watch for signs of distress, such as excessive pant- ing or the gums changing colour from pink to white.

As well, always trim your dog’s toe- nails. Long nails are more prone to damage, especially lateral splits, which expose the quick and make it painful for the dog to walk. Long nails also put more stress on the ligaments and bones in the paw. And contrary to what many believe, dogs don’t need long nails for traction—they get their traction from their pads and short, strong nails. Also trim the long hair between your dog’s toes so it doesn’t capture stickers and grit, which can cut or chafe the skin.

Pointing dogs are like cross-country runners who would rather bust brush than stay on the trail. That means their nutritional needs are greater than those of canine couch potatoes and comfort hounds. If you don’t want to run out of dog after an hour of hunting, start build- ing up your pointer with a performance dog food.

A quality performance dog food will have at least 30 per cent animal-based protein, a higher fat content than regular food, and a good source of fibre for intestinal health. Chicken and lamb are easily digestible and good choices. Avoid crude protein from soy beans and corn It can take months to condition a dog’s muscles, bones and ligaments for strength and stamina, so switch to a performance food in early August. Introduce the new food gradually over three or four days by mixing it with regular food in a higher proportion each day.

Hard-core upland hunters and field trialers whose dogs hunt hard several days a week know that a performance do food pays off with more birds pointed. Simply, the dog can hunt harder and longer with less down time due to strain or injury. If your dog only hunts a few hours a week, however, the higher protein may not be justified.

By August, many trained pointers have had eight months of unrestricted dog fun, stalking squirrels, digging holes and chasing songbirds in the backyard. Of course, every dog needs that, but it’s a far cry from the complex skills it requires to find, point and retrieve game birds.

Mike Wiltshire of Cayuga, Ontario’s Ruffwood Brittanys & Bird Dog Train- ing is a professional dog trainer with 33 years’ experience. He says there are very few pointing dogs that remember their training perfectly after an eight-month break. Consequently, August through early September is a busy time of the year for him, as many clients want their dogs tuned up for the upland season.

According to Wiltshire, the skills might come back naturally for smart pointing dogs, such as English pointers, which are best at retaining what they’ve learned. If your dog’s skills don’t return quickly, however, your limited hunting time will become training time. And if you don’t stop hunting to correct behaviour and reinforce the training, the dog will assume its poor performance is acceptable. In other words, what you let your dog do, you are training it to do.

“Whoa” is the most important command for a pointing dog, and it should be reinforced at every opportunity. Remember, a dog that’s standing still is ready to learn. Condition your pointer to adhere to the command year-round during everyday life in your house, using it before you put down the dog’s food, for example, or before the dog goes through a door.

A month before hunting season gets underway, head to the yard and make sure the dog still obeys the whoa command. Then take it into the woods, or a park with a lot of distractions, and make sure the dog obeys there, too. Next, repeat your training for quartering, steadiness to wing and shot, and stopping to flush. It’s like training a new dog, although your already-educated dog will ideally catch on faster. Keep the training sessions short, but do them daily.

By late August, young game birds are good flyers, so it’s safe to take your pointer into the woods without risk of it catching them. Most jurisdictions allow dogs to be afield as long as they’re under full control and you do not catch, kill, injure, harass or possess game animals. There’s no substitute for wild birds in pointer training, especially for sneaky, hair-trigger ruffed grouse in southern areas and roadrunner pheasants on the prairies.

On cool mornings and evenings, you can run your dog in your actual hunting covers, without a gun, and review its quartering drills. If the dog strikes bird scent and points, praise it for good work. If it creeps in and busts the bird, gently bring it back to the place where it should have pointed. Whoa the dog there while you kick around in the brush where the bird was.

If your pointer flushes a bird by accident, or a bird flushes wild that the dog hadn’t scented, whoa the dog at the flush to rein- force that it must stop at every flush. If the dog busts and chases birds and ignores your whoa, go back to the yard and work on the command until it obeys.

If it’s too hot to run your dog in the woods, use your time instead to drive the backroads scouting out bird numbers, which can lead to excellent train- ing opportunities. Keep the dog in a kennel in the vehicle so it can’t see if any birds appear on the road ahead. If you see a bird, stop and wait until it walks into the brush. Now you have a scenario similar to a planted bird. Check the wind direction and put the dog on the ground downwind of the bird, even if you have to drive past the bird first.

Watch the dog carefully, and as soon as its body language shows it has scent, whoa it. Whether you have the dog on a check cord here will depend on its level of training and how reliable it is with your command. If the dog stops, praise it for obeying. If you’re with another person, have that individual walk in to flush the bird. If you’re alone, do it yourself after the dog has held point for a solid min- ute. Keep the dog on whoa until after the flush, then release it.

Many pointing dogs don’t want to stop hunting to retrieve because their prey drive is much stronger than their retrieving instinct. To make sure your dog will retrieve in the woods, bring retrieving dummies with you when you’re on train- ing runs and hide them in the woods for blind retrieves. If the dog won’t retrieve, then you need to start again with your conditioned retrieve training, repeating it each day until the dog gets it—and is finally ready for the season ahead.