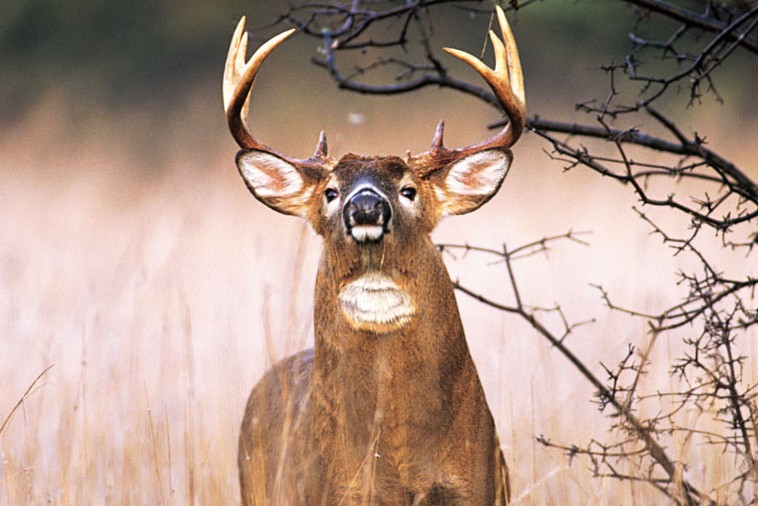 A hunter's guide to tagging the largest bucks

How many times has a buck snuck by you while you were hunting? Or how many times have you walked right past one that’s hiding? You’ll never know for certain, but rest assured it happens to all of us who hunt white-tailed deer. Few game animals have such superior senses and agility, or can vanish so quickly into dense cover, as white-tailed bucks. But by understanding some of their most cagey behaviours, you can definitely increase your opportunities for success.

Is there such a thing as an unhuntable buck? Are there bucks that go completely nocturnal when under hunting pressure? Yes—to a degree. These hunter-wise bucks certainly limit their movements during daylight hours, but we all know they can’t totally vanish. They have to be hiding somewhere, so the trick here is to find out where.

Many whitetail experts will concur that there are bucks that are largely nocturnal, rarely glimpsed in the daytime. These bucks most often live in areas where there’s ample forage, so there’s no mad dash for the buffet every morning and evening. Whenever they arrive at their feeding areas, there’s always enough to be had.

Some experts go so far as to suggest that these rarely seen bucks are too smart to even let their reproductive urges get the better of them during mating season. If one is tending a doe in estrus and she leaves the protection of the forest, for example, he will refuse to follow.

Scent is a white-tailed buck’s greatest defence. Scientists have estimated that a deer’s sense of smell is 25 times greater than ours—a substantial difference, and not one to take for granted. Mature bucks always move with the wind in mind and are very quick to pick up any unusual smells. If they sense something out of the ordinary, they’ll always circle to the downwind side of whatever has aroused their suspicion and rely on their acute nose to confirm a potential threat. This has happened to me on many occasions, so trust me, once the buck is downwind, the game is over.

Sure, there are scent-reducing hunter-specific products available, and I use several myself-such as special soap, shampoo and laundry detergent—but I never assume that they’ll completely erase my human odour, not for a second. I do believe, however, that such scent-limiting precautions can at least lessen the human aroma in the woods to a certain degree, and if it means a buck will wander 10 yards closer and within range before winding me, then the effort’s worth it.

With careful searching, an obscure maze of deer runways can be found just about anywhere in whitetail country. But, contrary to common belief, not all the deer that inhabit the area will use all the runways. Mature bucks prefer to travel along paths that, for the most part, keep the animal somewhat hidden. Bucks that avoid hunters year after year and grow to be the largest and wariest of the forest will always select trails that stay within the edge of the bush, and they only emerge to feed.

When they do reveal themselves, it’s usually off in the most sheltered corner of, say, an alfalfa field, or in an out-of-the-way pocket of an apple orchard that offers dense vegetation to keep them as camouflaged as possible. Only the cover of darkness or the allure of a doe in heat will be enough to encourage prime-aged bucks to venture out into more exposed areas.

And if bucks do head across clearings, especially when they’re under pressure, they’ll always opt for the shortest route possible. In situations where an opening is large enough that they can’t easily go around it (such as a long field or a hydro corridor), a patch of forested area jutting partway across the opening is often their preferred route when heading to their feeding or bedding areas.

With the exception of a heavy snowfall of more than three inches during the post-rut, bucks that are prowling for does pay no heed to rain or snow and simply focus on the one task that’s occupying their minds. But when it is snowing heavily, I recommend situating yourself adjacent to a stand of evergreens-especially if it’s late in the season. Deer will be drawn toward this type of low, sheltering, swampy vegetation for added protection from the elements.

Otherwise, adverse weather can prove to be very rewarding for hunters, especially during the rutting period from late October through to late November. In fact, for those who enjoy the art of still-hunting, or stalking, rainy or snowy weather can help muffle any noise you’d typically make while walking on fallen leaves. This allows for more stealth in the woods and the opportunity to sneak up on an unsuspecting buck. Adverse weather also dramatically reduces a deer’s senses. Vision, hearing and smell are all impeded by what’s normally considered to be bad weather, and for bucks that are running about chasing after does, this can sometimes prove to be fatal.

Don’t call it a day and head for camp or home just because it’s raining or snowing—even if it’s coming down in buckets or by the shovelful. Instead, always pack gear that will allow you to stay afield if the weather changes. A thin raincoat or poncho will easily fold up into your pack or pocket. You can even purchase camouflage umbrellas that will strap to a tree above your head. Easier yet, you can fasten a small board or piece of waterproof green or camouflage material above your stand before the hunt, assuming you’re hunting private property. On public or crown land, it’s best to bring along some kind of portable set-up.

We’re all limited to the number of days each season that we can be out deer hunting, and we wait all year for this time to come, so don’t abandon your hunt for shelter just because of inclement weather. The bucks will certainly still be on the move.

After almost 50 years of deer hunting, for example, my dad’s best buck was taken when he decided to stay on watch all day, even though it was raining heavily. It was an early afternoon one November about 15 years ago, and my father was sitting comfortably on his hunting seat, leaning up against a tree. Anticipating the gloomy day, he had unpacked his rain poncho and settled in, relying simply on vision to hopefully pick out a deer in the loud, heavy rain. After several hours of inactivity, he lowered his head and rested. When he later lifted his gaze, he had to blink a couple of times—standing only 20 yards in front of him, in the pouring rain, was a very impressive 12-pointer and a doe. The deer were totally oblivious to his presence, and the rest is history. I don’t believe he’s missed a rainy day since.

Hidden bedding areas are a buck’s best-kept secret. Other than during mating season, bucks will spend several hours a day bedded in carefully selected locations. Granted, deer don’t sleep for long, but research has shown that they’ll stay in the same bed for more than two to three hours at a time, resting, chewing their cud and grabbing a little shut-eye in 10- to 15-minutes snatches. Though they may be resting with their eyes closed, and perhaps even sleeping, don’t be fooled-their ears will still pick up the slightest sound that’s out of the ordinary and bring them to full alert.

Remember, big bucks don’t get big hanging around in wide-open spaces. For bedding spots, wise old bucks always select a location that’s the most concealed or gives them the best vantage point over their surroundings, whether in the forest or in areas such as field edges or thickets. And at that they either select a site higher up on forested ridges so they can look down on most of the woods around them, or they’ll opt for dense cover such as a grove of cedars or a low-lying thicket. The last two locations always provide sufficient vegetation to hide from predators, as well as enough branches to act as tripwires to alert them to any approaching threat.

In one area where I’ve hunted for more than 15 years, there’s an isolated bedding area that went undiscovered for a long time. Along the edge of a small, marshy lake, little did I know there was a tiny island obscured by cattails. Each year, as the gun season would get underway, the bucks that I’d been watching over the previous months while scouting would vanish.

At first I speculated that there were just too few does in the area, causing them to move elsewhere during the rut. Then during a hunt several years ago, my cousin spotted some dense cattails that seemed to protrude too far into the lake and even rise up into some dogwood shrubbery. To him, this suggested there was firm land out there, and since our hunt had been very quiet over the previous couple of days, he elected to walk out into the cattails to check it out. By the time he was halfway to the undiscovered island, about six deer burst from cover and smashed through the cattails, angling past him back to the shore. We each got a buck that day.

Mature bucks have a reputation for being ladies’ men, always allowing the does to travel down trails and enter fields first. This gesture, however, is no act of chivalry. Rather, bucks strategically hold back for a minute or two to verify that the area is secure, using the does, as it were, to test the waters.

About six years ago, for example, I was hunting in a large tract of forest when a doe came around the knoll that I was sitting on. I fired, and as soon as the echo of the gunfire had faded, a movement caught my eye. Running away up a nearby ridge was a buck. I figure he’d been on the doe’s trail and I’d simply shot before he’d come into sight. If I’d held for just a bit longer, I would have discovered that the doe was not alone.

And that’s what makes it all worth the wait.