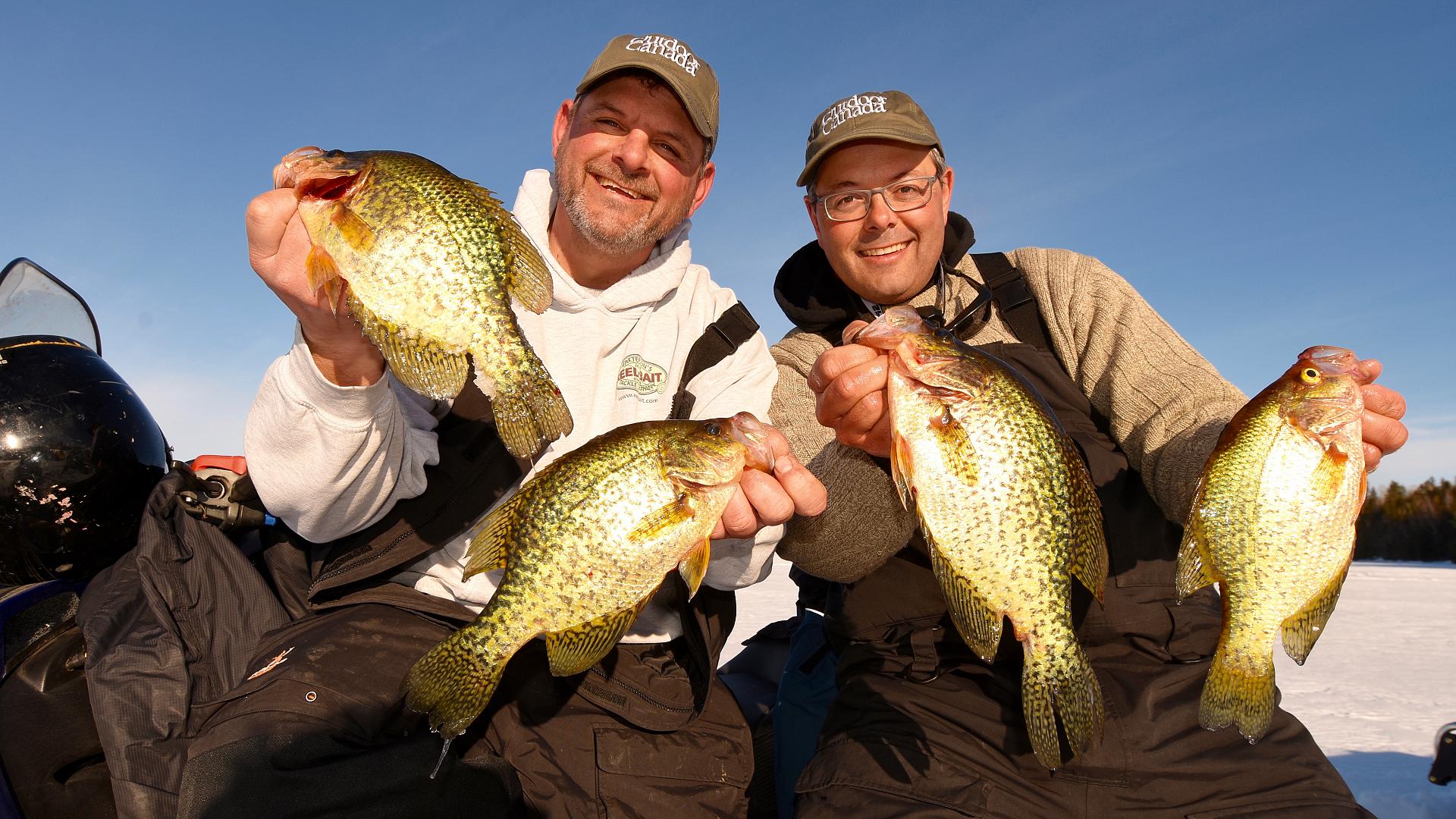 Ice-fishing secret: How pros use sound to lure in more fish

To lure in more fish through the ice, try making a ruckus

Sometimes, all it takes is a little desperation to discover an effective new fishing tactic. An outing last winter with my Saskatchewan buddies Jeff and Jason Matity offers a case in point. Expert ice anglers, the brothers paid me a visit in northwestern Ontario with their sights set squarely on catching trophy-sized crappies—a sportfish not found in their windswept home province.

Just a few days before the visit, I’d located a large school of 13- to 15-inch plate-shaped beauties, but left them undisturbed in the hope they’d still be there when Jeff and Jason arrived. Fortunately, they were. When we hopped off our snow machines, drilled through three feet of ice and snow and dropped our transducers down the holes, the sonar screens lit up like Christmas trees. I remember excitedly saying, “This shouldn’t take long.”

Boy, was I wrong—the fish just wouldn’t bite, steadfastly snubbing our baits. Now, what would you have done to fool those finicky fish? I’m betting that, like us, you would have used ever smaller lures, presenting them ever more slowly. But the crappies remained obstinate, frustrating us for more than an hour as we watched fish rise up, put their noses on our offerings as if to sniff them, then sink back down to the bottom. That’s when the guys started experimenting with sound to trigger a bite.

Jason dug deep into his tacklebag and pulled out a Fergie spoon that we intended to use the next day for walleye (above). He removed the wire holding the brass and glass clacker, and tied the noisemaker to the end of his line. Then he attached the same minuscule jig he’d been using without success to the rig’s split ring. After dropping it down the hole, Jason shook the contraption briskly enough that he could feel the brass weight sliding up and down the wire, banging against the glass beads. In short order, he was icing crappie after crappie after crappie (below).

That’s right. The same fish that wouldn’t open their mouths for the smallest, most realistic bite-sized jig suddenly went berserk for the same bait dancing below six inches of thick visible wire, with a half-ounce chunk of brass banging against two red glass beads. Don’t ever let anyone tell you that sound can’t be an attractant. Need more proof?

After we had cleaned up on the crappies, we set out one snowy morning to locate big burbot. Jeff and Jason may be the best ling anglers in the country, so I took them to a spot where I’d accidentally caught some of these fish in the past. To catch winter burbot, the Matity brothers’ favourite technique is to use heavy 3/4- and one-ounce Reel Bait Flasher Jigs with the willowleaf blade dangling below the head. They tip the jigs with thick butterfly fillets fashioned from fresh ciscoes, then hammer the lure so hard onto the bedrock bottom that you can hear it from 20 feet above on top of the ice.

Truth be told, we didn’t catch any burbot—too many big walleye annihilated the baits before they could trigger the beady-eyed burbot.

Making noise isn’t the only fresh tactic on the hardwater these days, however. A few year’s back, Freedom Tackle head honcho Michael Tamburro approached me at a sportsmen’s show to discuss a new spoon-style lure he’d been working on. He gave me a handmade metal prototype called the Freedom Minnow (below) and asked if I would test it for him on the down low.

That winter, I put the lure to work. When I dropped it down a hole and briskly lifted it back up, I could feel it vibrating like a lipless crankbait. Ditto when I let it fall. And as the lure shimmied, I watched wide-eyed as walleye, perch and crappies buzzed onto my sonar screen and whacked the daylights out of it. But if I tipped the lure with anything—a small piece of scented soft-plastic or an odoriferous minnow head, for example—it would alter the highly sensitive vibration, and I’d catch squat.

I fished with the Freedom Minnow for the entire winter and caught so many walleye, huge yellow perch and thick black crappies that it was without question the single-best lure I used that hardwater season. And for that, I credit its fish-attracting vibrations.

The takeaway from these hardwater experiences? I’m now convinced that sound and vibration are the next big frontiers in ice fishing.