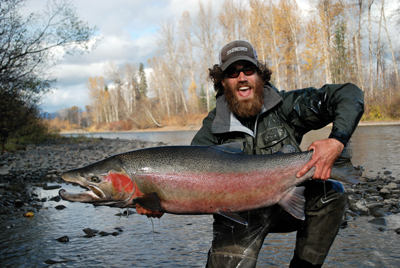 Location: Part of the Skeena Watershed in British Columbia

Hottest spot: Potato patch near the confluence with the Skeena

Among hard-core steelheaders, B.C.’s Skeena River is anointed water and the names of its tributaries—the Babine, Bulkley, Copper, Kalum, Morice, Suskwa and, in the upper reaches, the Sustut—are etched deep into angling lore. All are natal rivers to their own special brand of steelhead: big, brawling, chrome bruisers that easily break the 20-pound mark. Of all these Skeena tribs, however, the Kispiox River stands apart. A legend in its own right, the Kispiox is the one river where the steelhead are true genetic giants. Yes, you’ll probably catch fish in the upper teens, but if the gods are with you, there’s the chance of banking one in the 30-pound class, perhaps more. It happens almost every year, sometimes more than once. Autumn is magical on the Kispiox, provided the weather holds. Though the upriver migration of steelies through the Skeena system kicks off in the murky waters of the July snowmelt, the best influx of chromers takes place in September. By October, most stretches of the Kispiox typically have solid numbers of big bruisers. In November, most years, the river starts to ice up, making it brutal and dangerous to wade. Nonetheless, there are still diehard steelheaders willing to risk it for just one more cast—one more adrenalin rush when the fly stops swinging and the line tightens.