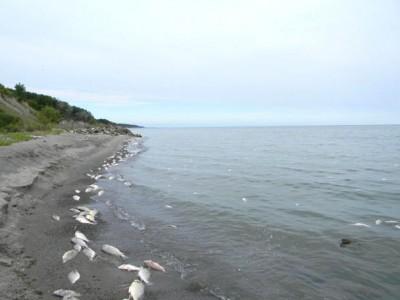 Lake Erie fish kill likely due to a natural process

A massive fish kill on Lake Erie, which left tens of thousands of fish rotting on 40-kilometre stretch of shoreline, was most likely caused by natural phenomena, says Ontario’s Ministry of the Environment.

The kill was reported over the Labour Day weekend, and the dead fish washed ashore from west of the fishing village of Port Stanley, to just east of Rondeau. The fish affected appear to be primarily freshwater drum (sheepshead), catfish, carp, perch, suckers and a vast quantity of the invasive round goby.

Despite the large number of fish killed, the environment ministry’s Kate Jordan told the Toronto Star that fish and water samples taken at the site did not show anything unusual. “We did not see any evidence of… a spill to the lake or man-made pollution… so we are considering natural causes, including a lake inversion.”

Lake inversion, also called “rollover” or “turnover” is a seasonal phenomenon that occurs in many Canadian lakes, and is well known to anglers. Inversion happens when the surface water cools down dramatically, sinks and displaces the bottom layer, which has lower oxygen content. As the bottom layer is displaced, it rises and robs fish of oxygen needed to survive. Oxygen levels eventually return to normal, but it’s a gradual process.

Even if some fish managed to be carried along as the layers inverted, they would likely either starve if they stayed in the lower layer of oxygen-rich water, or suffocate if they swam to the surface to feed. A relatively shallow water body, such as Lake Erie, is more likely to experience a rapid drop in temperature.

Inversion also explains the foul smell reported by lakeside residents hours before the dead fish started washing ashore. A turnover releases dissolved gasses from the lake bottom to the surface, including hydrogen sulfide, which results from bacterial breakdown of organic matter in the absence of oxygen, and has smells like rotten eggs.