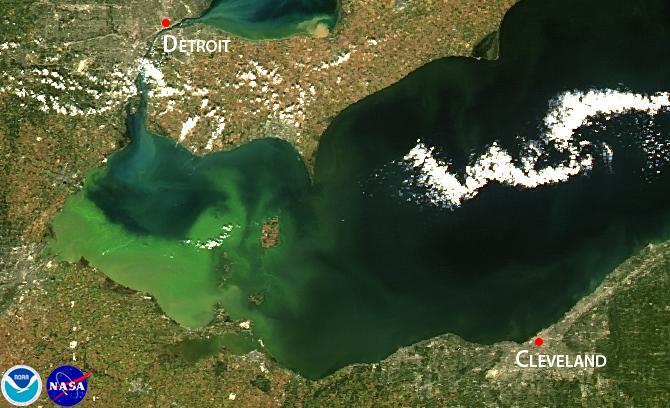 Lake Erie to see another harmful algal bloom this summer

Lake Erie will likely experience a significant bloom of toxic blue-green algae in 2014, but it should be smaller than last year’s intense bloom, according to a new report.

There should also be considerably less algae than during the record-setting bloom of 2011. However impacts will vary across the lake’s western basin, say officials with Ohio State University’s Sea Grant Program and the National Oceanic and Atmospheric Administration and other research partners.

Harmful algal blooms were common in western Lake Erie from the 1960s to the 1980s. After a lapse of nearly 20 years, blooms have been steadily increasing over the past decade, pointing to a concerning future for one of Canada’s top walleye, bass and steelhead waters.

While some types of algae are beneficial to the aquatic food web, harmful algal blooms result from extreme growth of algae in environmentally stressed systems. In freshwater, most blooms are caused by cyanobacteria (also known as “blue-green algae”), and seriously degrade water quality. In recent years, Manitoba’s Lake Winnipeg has also suffered large algal blooms.

Along with a bad smell, the algae can produce potent toxins that can harm the human nervous system, skin or liver. Additionally, as masses of dead algae sink to the lake bed, their decomposition consumes much of the available oxygen, forming vast “dead zones” where most aquatic organisms cannot survive. These dead zones kill or displace fish, driving cold-water species up into warmer water, and disrupting feeding and spawning patterns.

The recent blooms are caused primarily by high levels of phosphorus-rich fertilizer washing into the lake’s shallow western basin. Much of the phosphorous enters Lake Erie from the Maumee river, a major tributary draining a massive agricultural region of Ohio.

Since 2008, NOAA has issued weekly algae bulletins for western Lake Erie through to give warnings of bloom development. This is the third time NOAA has issued an annual outlook for western Lake Erie. “With this information, we can work collectively to understand harmful algal blooms and mitigate risk to humans and marine ecosystems,” said Holly Bamford, assistant NOAA administrator for the National Ocean Service.