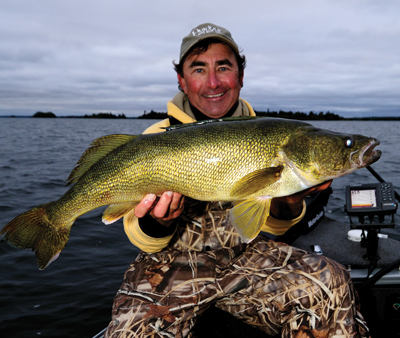 I don’t believe I’ve spent a single day ice fishing on Lake Winnipeg when at least one member of our three- or four-person party didn’t land at least one double-digit walleye. Most days, in fact, the scoreboard will show multiple catches of fish weighing between 10 and 14 pounds. The fishing is just as good during the open-water season, when schools of giant greenbacks migrate out of the massive inland sea and into the Red and Winnipeg Rivers. At the peak of the spring and fall runs, there are more big fish crammed into the rivers than anywhere else on earth. Still, I have a soft spot for the ice-fishing season. This is fly-in quality fishing without the fly-in—the lake lies just 55 kilometres north of Winnipeg, and most days you can drive right out onto the ice to your fishing spot. Heck, you can walk out from shore and catch the walleye of a lifetime, although snow machines and ATVs are best. Why such great walleye fishing? Because Lake Winnipeg is so huge and so productive. The 10th largest lake in the world, it drains more than 984,000 square kilometres of deep, rich, productive farmland. And much of the nutrients making their way to the lake end up fertilizing the best possible crop of all: bountiful 10- to 16-pound-plus walleye.

Why we chose it in 2010: Walleye; The legendary greenbacks

When to fish: Fall is prime.

Where to fish: Focus on the channels and rock piles in Traverse Bay.

Tip: Troll crankbaits, or anchor and thump a 3/8- to ½-ounce jig tipped with a live minnow on bottom.

—Rob Furutani, a tournament angler for 15 years and president of the Saskatchewan Walleye Trail