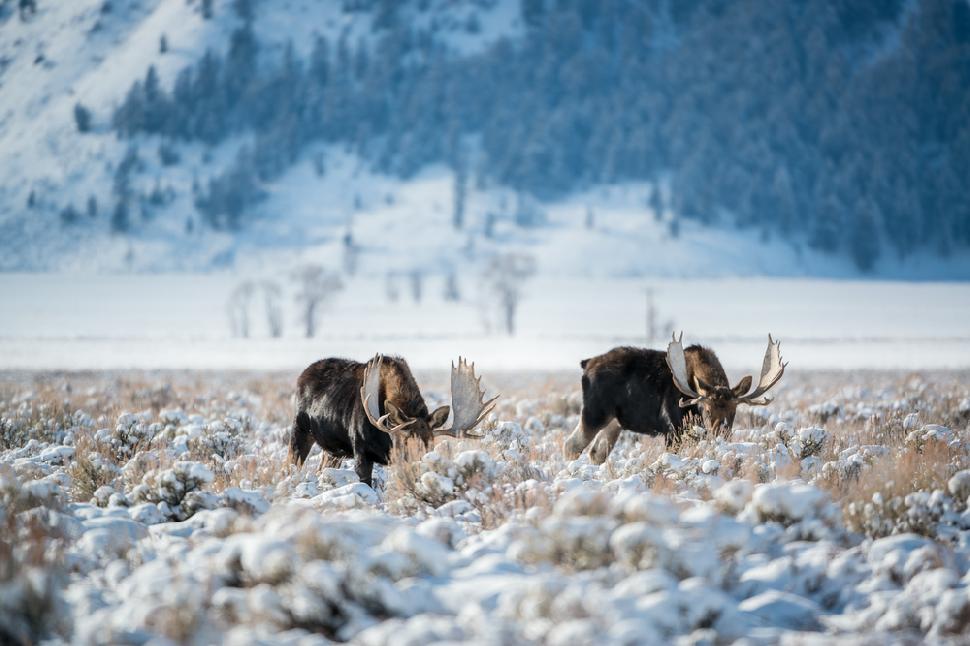 As hunting season wanes, the anticipation that fuelled us through earlier days afield also dwindles. Maybe our expectations for opening-day success were unfulfilled, or perhaps our hopes of filling another tag or taking another limit have failed to materialize. Whatever the case, with each passing week our surefire tactics are proving to be less and less effective.

As the days shorten, the snows deepen and the temperatures plummet, game adapt accordingly. And the resulting changes in their behaviour are only exacerbated by their own life cycles—the core of the breeding season is past, and other needs take precedence. But all is not lost. Adaptation is as important to the hunter as it is to the hunted. Be willing to amend your strategies, and opportunities for success are bound to be just as plentiful on the last day of the season as they were on the first. Here are my top end-of-season tips for successfully hunting big game, waterfowl and upland birds.

With the peak of the rut behind them, white-tailed bucks are no longer consumed with thoughts of breeding. The physical challenges of the rut can be hard on them, putting undisturbed rest and a return to active feeding at the very top of their to-do list as winter looms.

Identifying preferred bedding locations is key for the post-rut hunter. These tend to be relatively remote and deep in the woods, particularly in areas with high hunter pressure and easy access. Also look for small, isolated patches of cover, especially when close to quality food sources. To find these secret haunts, be prepared to put lots of mileage on your boots, seeking sign as you go. If you can identify active trails between bedding and feeding locations, consider setting up a ground blind adjacent to the downwind side of the travel corridor. If you’ve read the sign correctly, most often you’ll see a buck on your first day, as their movements are much more predictable and regular at this time of the season than during the height of the rut.

Rattling and decoys don’t do much good during the post-rut, but a grunt tube can still get the attention of curious bucks—it’s always to your advantage if the buck is on the move, not you.

The late season is also ideal for staging two-person drives. Slowly and quietly work downwind through pocket cover, with a third hunter on point at the likely escape route. A drive of this nature isn’t about making noise—it’s about gently pushing a buck out of cover. And it’s surprisingly effective if you’ve identified a core bedding area.

With their energy depleted from the strain of the rut, late-season elk focus almost exclusively on food. And in most elk country, that means agricultural crops—standing grain, second-growth hay or haystacks are favourites. Many farmers and ranchers consider elk to be a pest at this time of year, so they’re more than happy to grant hunters access to their land.

If you’re after a cow or young bull, a proven strategy is to set up along the edge of feeding fields during the shoulder hours; overcast days are generally best. It’s usually just a matter of patience if you’ve already patterned the elk and they’re undisturbed. If you’re after a mature bull, however, you’re going to have to get into the bush. Bulls will seldom expose themselves before legal light has long faded below the horizon.

Elk generally bed down during the day in thick timber, often a few kilometres from where they’re feeding. Bulls will feed through the bush during the daylight hours, working their way toward prime agricultural fields. They tend to use the same trails repeatedly, so position yourself downwind of one of their established routes. Set up well back into the trees and you’ve got a good chance of taking a bull.

An overlooked hot spot for late-season bulls is on high, windswept mountain slopes, where strong winds keep the grass exposed late into the year. Hiking through snow-laden lower elevations to reach such areas can be a challenge, however, so it pays to have a specific bull located before setting out.

In the mountains and foothills, mule deer have defined summer, fall and winter habitat, descending in elevation as temperatures drop and snow accumulates. Hunters should therefore react accordingly—by late November, a mulie buck may have travelled a considerable distance from where you saw him in September.

In the late-season post-rut, it pays to put miles on your tires and hours behind a spotting scope searching for animals moving to their key wintering grounds. Big mulie bucks are often found on their own at this time, so don’t focus exclusively in areas where you’re seeing does and fawns. And if you’re not seeing bucks where you think you should, head for a lower elevation.

In prairie habitats, the post-rut generally finds mulie bucks in the bottoms of creeks, river valleys and coulees, where cover is at its thickest. Take advantage of the high ground and let your optics do most of the hunting. On warm days, pay particular attention to shaded north-facing slopes. When it’s extremely cold, on the other hand, focus more on slopes that face south.

Whether you’re hunting mulies in the mountains, foothills, forests or prairies, it’s a spot-and-stalk game late in the season. Find a specific animal, then use the available terrain, cover and wind to your advantage as you stalk to within range. Stealth is critical when it comes to success hunting mule deer—those huge ears aren’t there for decoration.

Post-rut bulls avoid predators—including humans—by secluding themselves in areas with considerable food, such as willows, young poplars and dogwood, to replenish their fat reserves before winter. Once they’ve found such a hiding spot, they’ll stay there for weeks unless
something forces them to leave. Bulls will share these premium recovery rooms with other bulls, and often use the same area year after year until the vegetation matures past the point of providing nutrition.

Unlike hunting during the rut, don’t expect a bull to come to you. Instead, you’re going to have to take the action to him. Where topography allows, take advantage of rises in the land to glass prospective areas for moose on the move or bedded down.

The glint of an antler often gives them away at surprisingly long distances. Stalking to within range is relatively straightforward once you’ve spotted a bull, provided the wind doesn’t betray you. When there’s snow on the ground, tracking is another option. And if you cut fresh tracks during the late season, it’s unlikely the owner is far away. Bulls move very little at this time, so plan, rather than rush, your approach.

Having learned their lessons throughout the fall, late-season Canadas are the most difficult birds to fool. Feeding fields are usually limited and concentrated by this time, however, so at least the birds are relatively easy to locate. When you find them, note what time they feed—as the cold season deepens, geese often switch to just one feeding period a day.

Instead of putting out as many decoys as possible, as you would early in the fall, consider switching to a smaller set-up with no more than four dozen blocks. Set them out in groups of 12, leaving two or three landing zones. Off to one side, add a couple dozen mallards as confidence decoys, even if there’ve been no ducks in the fi eld. Don’t be shy about clearing away any snow around your decoys—geese prefer to land on bare ground.

Early in the season, blinds are typically placed immediately upwind of the landing zone. But for educated late-season geese, position your blind so that the birds land crosswind to you, averting their prying eyes from your location. Keep your calling to a minimum and at a low volume—if you’re set up in a fi eld where geese want to feed, you risk doing more harm than good by overcalling.

One problem with cold-weather hunting is frost forming on decoys, creating a glare that can fl are approaching birds. This is almost
impossible to prevent, although flocked decoys will have less glare. It also helps to periodically brush away the frost. Otherwise, just accept that there’ll be some glare. And more often than not, late-season geese won’t care all that much about it anyway.

Search rivers, reservoirs, warm water discharge ponds and deep lakes to find the last of the open water, and you’ll undoubtedly find roosting mallards. If you first spot them feeding, follow them back to the roost. Mallards can be hunted equally effectively on
the water or in the fields, depending on your preference and the opportunities presented.

In either situation, any available natural cover provides a huge advantage. Where none is available, camouflage your blind
as much as possible. Layout blinds are a much better choice than panel blinds at this time of year. Since late-season mallards can be extremely wary, often circling repeatedly before setting down, you want to ensure they can’t see down into the top of your blind.

In open-water situations, small decoy spreads work well—18 to 24 blocks should be enough. In the fields, however, use whatever decoys you have available, with the more the merrier. And for added confidence, set out a couple dozen goose decoys to fill out the spread, even when you’re not expecting geese.

Calling isn’t required with late-season mallards. They know where they want to be and excessive calling does more to alarm than attract them. By November, mallards will be fully feathered, so to help ensure cleaner kills, step up in shot size from what you used earlier in the season.

November and December often provide the best grouse hunting of the season. The leaves have fallen, making roosting birds easy to spot, and tracks in the snow make identifying key feeding habitat a breeze.

Look for ruffies in mid-aged deciduous forests with a rich understory of rose, willow, hazelnut and alder or similar shrubs. The best areas typically have adjacent stands of mature spruce, cedar or fir, where the birds can find refuge from both the weather and predators. Grouse may be scarce in areas that saw plenty of early-season hunting pressure. In that case, look for islands of hardwoods surrounded by marshes or beaver ponds that would have prevented easy access for hunters before freeze-up.

If you’re hunting alone, slowly work the edges of feeding cover using a stop-and-go technique. If you have a dog, give him his head—he’ll unravel the myriad scent patterns. In two-man teams, work small patches of dense cover, sending one hunter through the heart of the thicket while the other stays on the perimeter, ready to shoot grouse that flush. Late-season birds often short-flush to the safety of nearby spruce trees, where they’ll sit on mid-level branches.

Though difficult to spot, they’ll usually hold for a considerable amount of time. This often gives the persistent hunter a second, and even third, chance at them. On cloudless days, be sure to keep the sun at your back whenever possible, especially early and late in the day. Nothing is more discouraging after walking for several hours than to have your last, or only, flushing grouse swallowed by a setting sun. Well, that and an empty stewing pot.