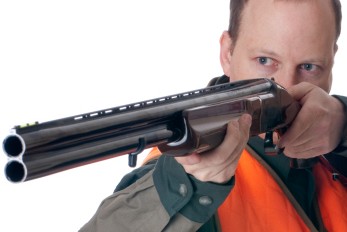 I’m right-handed but, having a dominant left eye, I naturally shoot left. In and of itself, that’s not a problem. In fact, it can be an advantage when I’m hunting waterfowl or upland birds with more than one partner. Since right-handed shots typically prefer to swing right to left, I almost always get the right end of the line while my friends squabble over who gets the left side.

No, the only real challenge to being a southpaw shooter is finding guns that are built specifically with the lefty in mind. Sure, you can shoot left-handed using right-handed guns. With bolt-action firearms, though, you have to learn to either reach across with your left hand to work the action, or drop the stock from your shoulder, reverse the position of your hands, work the bolt with your right hand, then switch hand positions again as you remount.

Neither technique is particularly efficient, however, and with most repeating-action firearms you also have to put up with extracted cases and hulls tumbling across your face. Another option is to learn to shoot right-handed, but given the importance of eye dominance, not many succeed at this.

The best solution, of course, is to shoot true left-handed guns, but there are few models to choose from compared with the choices righties enjoy. For example, I was recently in the market for a .375 H&H, not a popular calibre at the best of times, much less so in left-hand.

While Browning offers a .375 in its time-tested A-bolt, these rifles generally don’t fit me well. Plus, I wanted a model that was a little heavier to help mitigate recoil. Czech gun maker CZ, meanwhile, recently introduced a left-handed .375 in its Model 550, but a few phone calls quickly convinced me it won’t arrive in Canada any time soon. The only other options were higher-end manufacturers that were simply out of my price range.

I finally turned up a used Remington 700 KS Safari that should fit the bill, but the entire exercise reinforced the difficulties we left-handed shooters can face. So, what exactly is on the rifle market today built specifically for southpaws?

Remington makes several left-handed versions of the 700, though calibre choices are limited. Interestingly, the company offers the SPS Compact Synthetic, designed for youths, for left-handers; it was the only left-shooting rifle I could find that’s specifically built for those smaller in stature.

Browning has a pretty good selection in the A-bolt, from the .22 Hornet up to the .375 H&H, while Savage offers left-handed versions of Models 12, 14 and 114 in .204 to .300 WSM. Then there’s Ruger, which is building the M77 in three models also designed for lefties, in .204 up to the new .375 Ruger. And Tikka’s T3 is available in a similarly wide range of southpaw models, as is the H-S Precision family of rifles.

Note, however, that while the top to bottom range of calibre options may be relatively wide, many specific chambers available for righties are not available in left. And several prominent manufacturers, including Kimber, Sako and Winchester, are not offering any left-hand actions in their current catalogues.

For shotgun hunters, the choice is even more limited, with only Benelli and Remington offering true left-handed models in their current lines. I suppose that in semi-auto and pump actions this isn’t a huge problem, as long as you can get used to ejected hulls flying across your field of vision, not to mention having to operate a backwards safety (thankfully, at least, some shotguns have safeties that can be reversed).

If you’re a southpaw shooter, it’s easy to get discouraged by the seemingly poor availability of firearms designed specifically for your needs. But all in all, I have to say that given the market demand, the choices are actually pretty good these days. And if you can’t find something new that’s to your liking, you can always do what I did and turn to the used market.

Some shotguns, especially double-barrels, are built with a significant amount of so-called cast-off, a bending of the stock to better align the barrel with the shooter’s right eye when brought to shoulder. Be aware of this if you’re a southpaw, and be sure to test mount any double you plan to purchase, particularly a European model, to ensure it comes up okay for you. Shotguns with cast-on are out there, but they are few and far between.