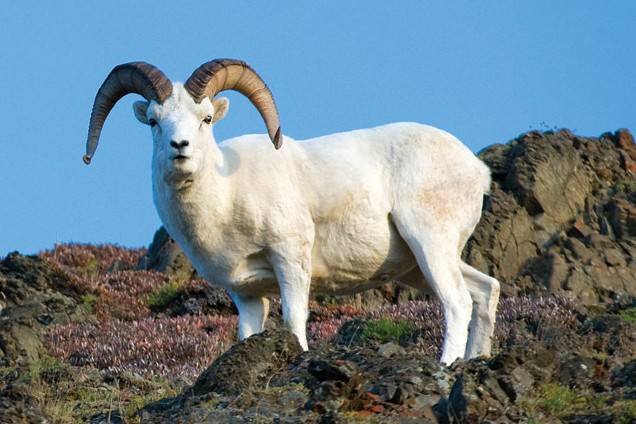 Above the 60th parallel, the Mackenzie Mountains sweep 800 kilometres northward into the Northwest Territories. On the east, they’re bordered by the north-flowing river of the same name, and their western slope is in the Yukon. For sheep hunters, the towering spires and impossible scree slopes are the stuff of dreams. It’s a rugged land where the high crags and alpine basins are home to roughly 20,000 Dall’s sheep—named in honour of naturalist William H. Dall—with a high number of trophy rams older than 10 years. They’re stunning animals, these white sheep of the northern mountains. Though less massive than those of a bighorn, the horns of Dall’s sheep are elegant, flaring outward, frequently in full curls or better. Almost everyone willing to do what it takes has reasonable opportunity to take a legal ram, but this is tough country. Hunts involve gruelling 600-metre climbs day after day, the questionable comfort of flimsy spike tents, sweltering midday heat and bone-chilling cold after dark. In terms of grit and determination on the part of the hunter, each of the 200-plus rams taken yearly in the Mackenzie Mountains counts as a trophy. Unless you’ve been a resident of the N.W.T. for two years, a guided sheep hunt will run you $20,000, plus travel to the N.W.T., accommodation before and after the hunt, government trophy fees and gratuities. Access is by air from Norman Wells on the Yukon side, or from Fort Simpson to the east.

Department of Environment and Natural Resources