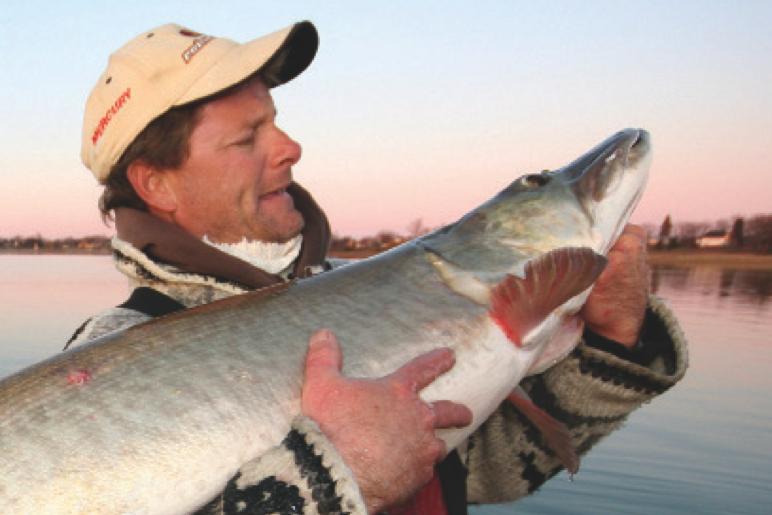 If a new world-record muskie is caught any time soon, the smart money is that it will come from either the St. Lawrence or Ottawa River, and that Marc Thorpe or one of his clients will catch it. The renowned muskie guide is a legend on the two mighty rivers, consistently guiding his guests to massive fish in the 58-inch-plus range.

And when that record fish is caught, it will likely fall prey to a lure trolled quickly, on a short line, in the boat’s prop wash—a technique Thorpe has perfected and dearly wishes he could have kept secret. “That is the problem being a guide,” he says. “You can’t hide anything from your guests. No matter how much you suggest they should keep silent about a technique, and keep it for themselves, they just have to run out and tell their friends.”

Thorpe gives credit to storied Lake St. Clair muskie guide Homer LeBlanc for pioneering the technique. Like a lot of fishing methods, speed trolling in the prop wash was initially a regional tactic, used almost exclusively by guides on Lake St. Clair. After he learned about it, Thorpe says he tried it on the Ottawa and St. Lawrence Rivers and started catching more and bigger muskies. “Not only can you cover water, but for some strange reason, putting your lure right behind the boat in the prop wash piques a muskie’s interest, and provokes it into striking,” he says.

If dropping a big bait into the wake of a noisy boat and pulling it along at five miles an hour doesn’t sound counter-intuitive enough, get this: Thorpe’s favourite trolling depth is three to 12 feet, and he typically lets out only three to 10 feet of line, so his lures are almost under the propeller. “You’d think all the commotion would scare the fish, but nothing spooks a muskie,” he says. “I remember one 50-pound monstrosity of a muskie. It hit three feet behind the motor, and I watched it chase down the bait and smash it in the head.”

With so little line between the rod tip and lure, and such massive fish attacking the bait, it’s essential to use the proper tackle. Thorpe’s preference is a nine-foot Shimano Compré rod teamed with a Calcutta 700 reel, which he spools with 65-pound-test Hi-Seas Grand Slam Braid. Completing the set-up is a GFW leader constructed from 130-pound-test Seaguar Fluorocarbon. As for lures, Thorpe relies on a wide selection of crankbaits, including Kriscos, Legend Perch Baits, Grandmas and Jakes, as well as spinnerbaits.

Note that speed trolling in the prop wash is primarily a summer presentation, which leads to a bonus secret tip from Thorpe. “The fish are still there in the fall, but they sit back and don’t move up as much,” he says. “They also want your bait further back behind the boat and down much deeper.”