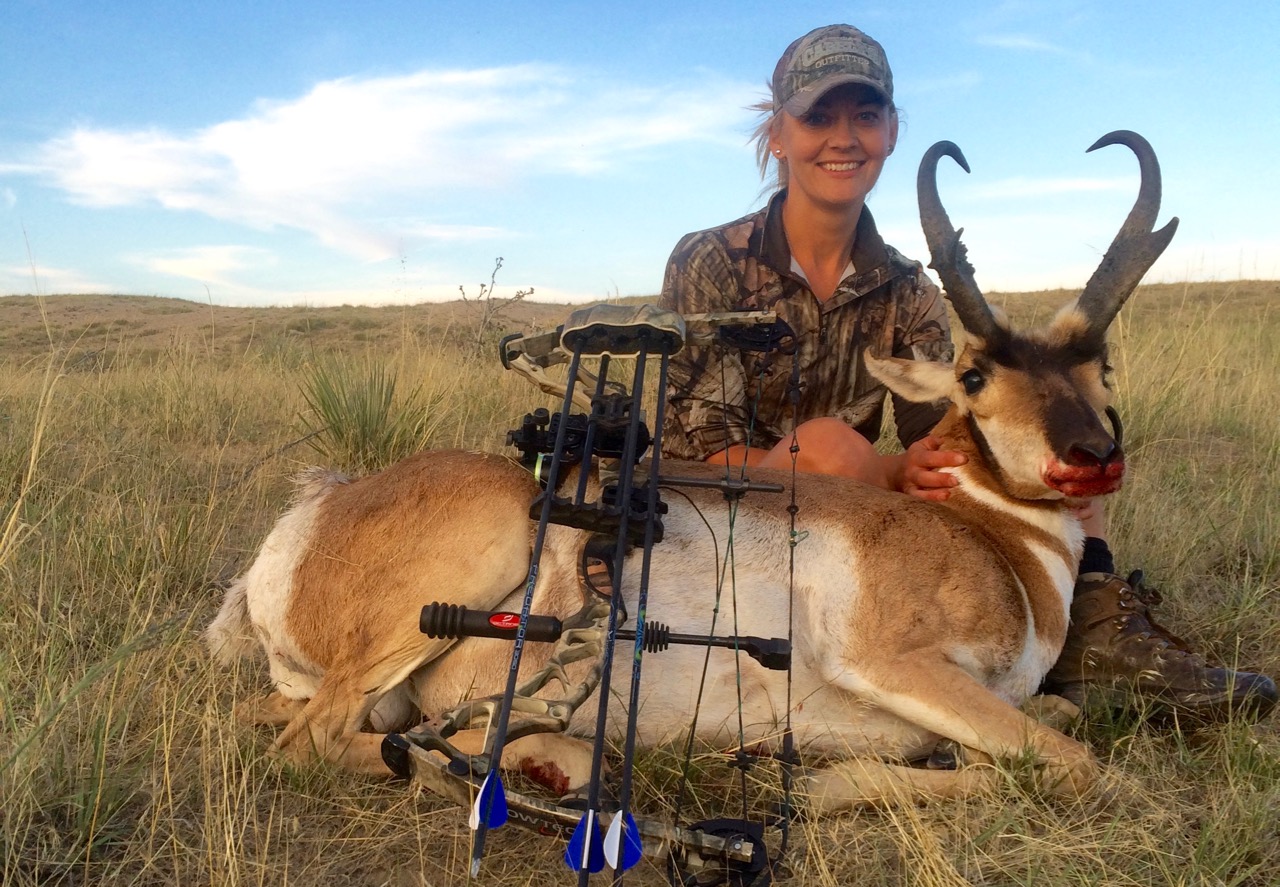 For Carly Deacon, the future of hunting in Canada has never been brighter

Ask Manitoba’s Carly Deacon about the attitude Canadians hold toward hunting today and her enthusiasm is barely containable. “Society has really changed for the better,” says the 37-year-old angler, hunter and conservationist. “We’ve taken a turn and there’s no longer this attitude that it’s a barbaric pursuit reserved for just a few people.”

Talk to her about the future of hunting in Canada, meanwhile, and her excitement only grows. “We see so many more women and children and families taking part,” she says. “The more we can reach out and support people who are interested, the better chance we’ll have of preserving the heritage of hunting in Canada.”

Deacon should know. As program manager for the Manitoba Wildlife Federation (MWF), and before that, Delta Waterfowl’s field program coordinator, she’s long been instrumental in introducing beginners to hunting, and sharing her love of the sport. It’s this unbridled passion, in fact, that helped her win Canada’s Top Outdoorswoman Contest, hosted by Outdoor Canada and Outdoor Canada West, and sponsored by Franchi Canada (see “Winning ways” below).

Deacon was born in Thunder Bay, Ontario, into a family that loved to camp and spend time outdoors. But fishing and hunting were never really on the agenda. “I fished with friends a lot, because that’s what you did in Thunder Bay,” she says. “My dad used to hunt, but he hung up his rifle before I had the chance to hunt with him…but I’m working on it.”

Her first real introduction to hunting came when she was 20, after accepting a summer job at Delta Waterfowl as assistant field technician. At the time, she was earning her bachelor of science degree, with a major in zoology, from the University of Manitoba. “I ended up being with Delta for nine years,” she says, noting that in addition to becoming the field program coordinator, she also worked on the organization’s first mentored hunts.

In particular, Deacon credits Jim Fisher, Delta’s director of conservation policy, and then president Rob Olson with sparking her interest in hunting. “Jim and Rob really were relentless mentors,” she says. “They took me out every chance they had. And as soon as I became interested in hunting, there was no stopping me.”

Olson and Deacon eventually migrated to the MWF, where Olson is now managing director and Deacon is responsible for hunter education and recruitment, including the highly successful Becoming an Outdoorswoman program. “Carly’s effectiveness comes from her total commitment to her passion, which is teaching new people to adopt the outdoors lifestyle,” Olson says. “She has a motor that doesn’t stop and her enthusiasm draws new hunters and partners to the MWF on a daily basis. She has world-class communication skills and might be one of the most effective advocates and spokespeople for hunting in North America today.”

Work-related kudos aside, Deacon’s commitment to hunting extends well beyond her day job. She’s served as a board director for groups such as the International Hunter Education Association and Wildlife Habitat Canada, and she’s volunteered her time on numerous committees and initiatives involved in mentored hunts.

Her personal life is also steeped in the hunting culture. Eight years ago, she married outdoorsman Clarke Deacon, and the couple love waterfowl hunting together, as well as trapping and fishing. They now live in Oakville, west of Winnipeg.

An avionics technician, 40-year-old Clarke says it’s easy to see why his wife is so good at her job. “She travelled North America to start her career in wildlife conservation, and I was able to travel to a couple places to see first-hand what all the fuss was about,” he says. “Finding nests, banding birds and just being there with her, it was easy to see why her commitment to conservation was growing.”

It’s no secret the outdoor world has largely been considered the domain of men. But things are changing. In 2015, Ottawa released the results of its 2012 Canadian Nature Survey, the first national poll of its kind in more than 15 years. It found that 21.1 per cent of the 2.1 million Canadians who hunted or trapped were female. That was up 6.1 per cent over the results of a similar study released in 1996. And anecdotally, more and more women across the land are participating in the likes of women’s outdoor weekends and hunter education courses.

But as much as things change, old stereotypes still occasionally shoot across the bow. When purchasing ammunition, for example, Deacon says she’s often approached by a store employee and asked if she needs help, something she feels likely wouldn’t happen if she were a man. “But I don’t take offence. I’m thankful that there’s someone there to help if you need it. If anyone needs it.”

Deacon stresses, however, that she’s also been extremely fortunate to hunt with men who put her gender aside. “I’ve never been disrespected while out in the field with guys,” she says. “I think if you’re willing to work, to pull your weight and not complain, you’ll always be seen as a good hunting partner.”

As Deacon explains, she’s not truly hunting if she’s not doing everything for herself. “If I ever felt that I was being segregated, then I wouldn’t be getting the experience I want, because it really is about the whole experience,” she says. “I want to get stuck in the mud. I want to clean my own birds. I don’t want anyone giving me the easy road.”

Like all hunters, Deacon is often asked the same question from non-hunters: Why do you hunt? Her answer is in her freezer. “Now that I’ve learned how to cook game, I love having a freezer full of meat I’ve harvested,” she says. “But it’s more than that. It’s an alternative activity that’s a challenge. And you can do it with friends and family. I take a great deal of pride in being responsible for this meal that I’ve harvested.”

She also believes the trend toward local food is helping hunters gain acceptance. “When we look at society, we see a lot of importance placed on organics, on nutrient-rich foods, on local food. It’s what people want—and hunting delivers it.”

Deacon cites the case of one participant who came into the Becoming an Outdoorswoman program as a vegan. “She was completely turned off of meat because of the way it was raised and processed on the large scale,” she says. “But after her experiences in the mentored hunts, she now proudly calls herself a hunter and meat eater.”

Despite such accomplishments, Deacon says there’s still a ways to go when it comes to encouraging more women—and more people in general—to hunt and participate in wildlife conservation. “I feel like the ball is rolling down the right path these days,” she says. “I want to be able to take my kids hunting 25 years from now. As hunters, we have an incredible responsibility to nurture future hunters so that can happen.”

And according to Olson, Deacon herself doesn’t show any sign of letting up on the throttle. “I think Carly’s biggest impact on hunting has been that she inspires women of all ages to give it a try,” he says. “Her passion to introduce new people to hunting is 100 per cent authentic and people can sense that.” The way he sees it, Deacon is a natural leader, overflowing with energy that new hunters gravitate to.

Says Olson: “She is the real deal.”

The premise was simple: Find an outgoing, media-savvy, avid outdoorswoman to represent the face of female hunters in Canada. Such was the main criteria driving our contest, launched last year, to crown Canada’s Top Outdoorswoman. And by all accounts, Manitoba’s Carly Deacon more than fits the bill. Along with this profile, Deacon’s prize includes a Franchi Instinct L over/under shotgun and a Franchi Affinity semi-auto shotgun (pictured), courtesy of our generous contest sponsor, Franchi Canada. As well, she earns the opportunity to serve as a brand ambassador for Franchi Canada.