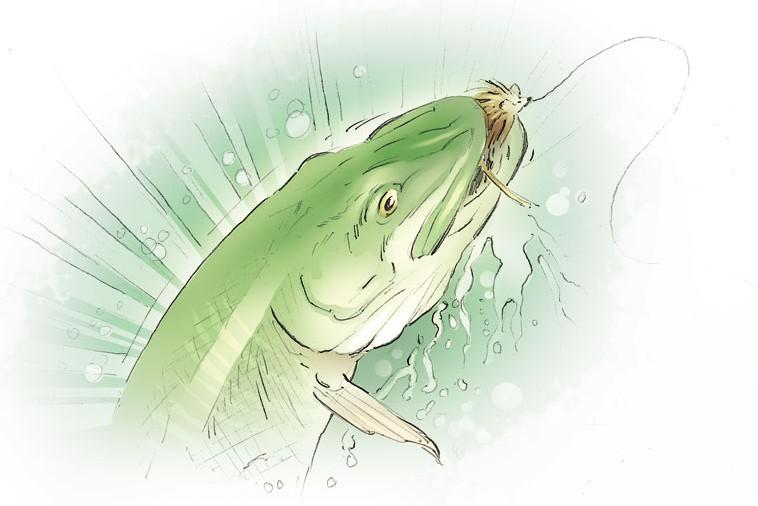 The next time you go fishing for muskie, try this much more exciting method

Casting huge, heavy plugs with two-handed rods and big reels is the standard for most muskie fishermen, but using a fly rod with mouse patterns is not only an effective approach, it’s also far less tiresome—and much more exciting.

For the best results, find a lake or river with a good number of muskies in the 30- to 40-inch bracket. Ideally, you want smaller, shallow waters because they provide a more captive muskie audience and are much easier to cover than huge, sprawling lakes.

Use the right gear

Start with an 8- or 9-weight, nine-foot fly rod and a weight-forward bass bug taper fly line. For dishing out air-resistant mouse patterns, I use line that’s one size heavier than recommended. Attach a seven-foot leader tapered down to 12 pounds, then add about six inches of 30-pound Tyger stainless-steel leader to deal with the muskie’s teeth.

The mouse patterns (tied on #4, #6 or larger hooks) are superb muskie attractors; they’re relatively easy to cast and result in visually dramatic and often explosive surface strikes. Most come with weedless mono guards, so you can toss them right into thick stuff, something you can’t do with most plugs.

Bring in the mouse with rapid strips, but also try a slower retrieve with intermittent pauses. I’ve had great success with both methods.

Another advantage to using mouse patterns is that the fight tends to be far more spectacular, since the single hook allows the muskie to swim and breathe naturally. A traditional muskie lure, on the other hand, can cause the fish to drown if the anchored trebles prevent it from closing its mouth. The mouse-caught muskie can also be easily released unharmed at boatside-something that’s not always possible with multi-treble lures.

Mouse patterns can also produce strikes from other species—bass and pike love them. And let’s face it: hours of unproductive casts can be boring, and the occasional strike from a non-targeted species is always welcomed.

Before you head out, set up some targets, such as Hula Hoops, and practise hitting them with your mouse pattern from 30 to 45 feet away. For safety and to avoid snags, clip the point and barb off the hook.

Always be ready to set the hook on a strike. Initially, allow the muskie to have its way, but as the fight continues and the fish begins to tire, apply increased pressure. Land it. Release it. Cast for another. It’s great sport.