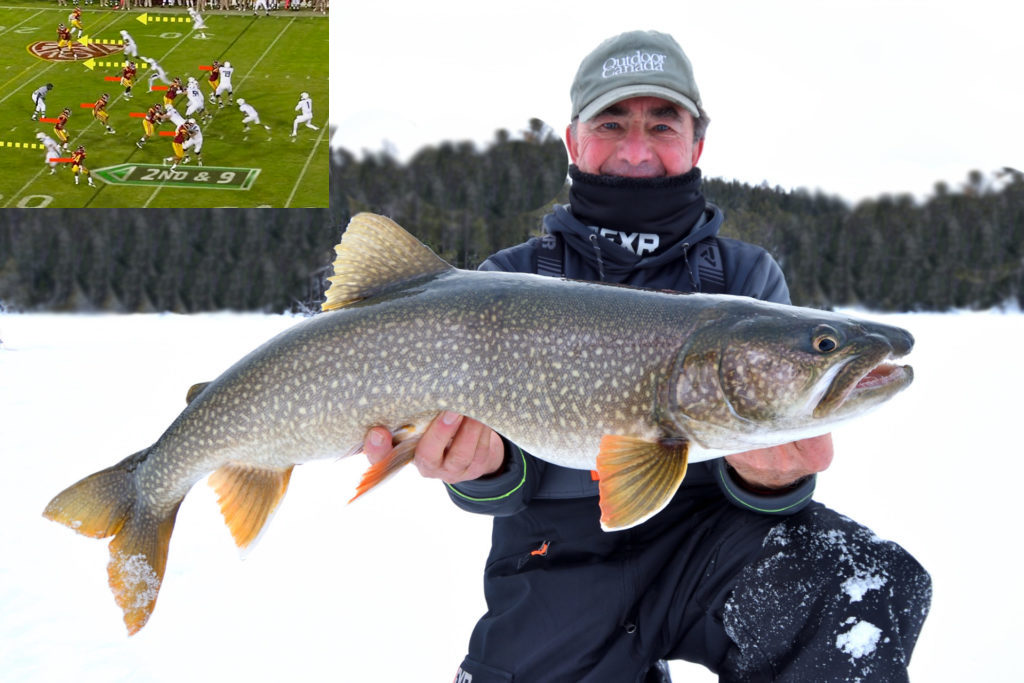 Follow the lead of the pros, and have a plan of action

No, I’m not talking about how you feel when you’re icing lake trout, walleye and crappies and then some interloper pulls in, and starts drilling holes scant metres away, and you have to stifle the urge to tackle them.

Instead, I am referring to an occasion several years ago when I guided Phil Petty, who was the tight end coach for the New York Jets, and his dad for several days of muskie fishing.

To say that Phil gave me an insider’s look into NFL football is an understatement. I can’t repeat many of the stories, several of which are hilarious. But  one thing I learned that I can tell you, is that every team carries a four- or five-person roster of coaches whose task is spending the week before a game independently analyzing their own team, as though they were the coaches of the squad they’re about to play. They do it, of course, to detect trends in the plays the quarterback calls in tough situations, as well as to reveal offensive and defensive weaknesses. So, if these special coaches do their job well, they know what the opposing coaching staff is likely thinking before they take the field on game day.

One of the other things that Phil enlightened me about is the “hurry-up offence” that every team employs when they have the ball, the game is on the line and there’s less than two minutes remaining. Each play is so scripted that if you follow football, you know that the last two-minutes can take three, four or five times longer than that to actually play, as the team marches down the field never having a huddle, calling audibles at the line of scrimmage, spiking the ball, running out of bounds and calling time outs.

Now, if you’re wondering, what in the world any if this has to do with ice fishing, here it is: Every time you start ice fishing a spot—underwater point, isolated reef, deep weedline, or whatever—it pays to employ a hurry-up fishing offence. In other words, you should know how you’re going to attack the spot, where you’re going to drill your holes, how you are going to catch the fish and when you’re going to leave. 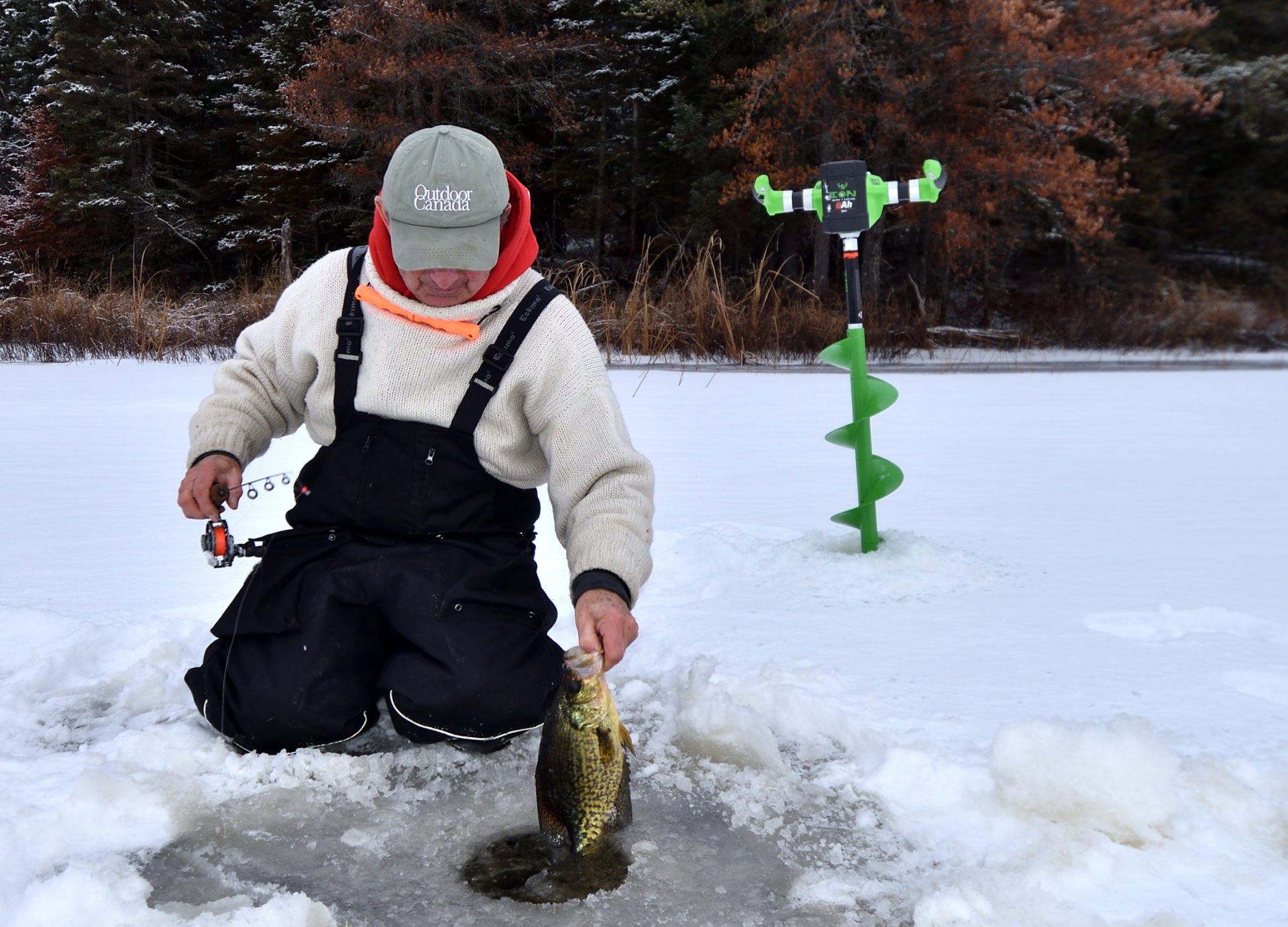 I’ve told this story many times, but the best person I’ve ever seen implement this tactic is good friend and legendary angler, Al Lindner. I miss our annual opening week lake trout get togethers, and will never forget the first time Al joined a few friends and me on a backcountry ice-fishing adventure.

It was a frigid winter, and while it was only the first week of January, we already had close to two feet of black ice covering most of the lakes. As the good host I was lugging around the big, clunky, heavy, 10-inch gas auger (oh, man, am I glad I don’t use that thing any more), drilling four or five holes for each of the five or six guys in the party. And buddy John Monteith was coming behind me with a shovel and scoop cleaning away the slush from each opening.

Out of the corner of my eye, however, I also noticed that Al was following us, like a shadow, with his sonar unit in one hand and two ice rods in the other. And as soon as John finished clearing away the slush, Al dropped the transducer into the hole, quickly jigged his lure from top to bottom with one of the rods, and then did the same with the other.

Now, by the time I had drilled 20 or more 10-inch holes through two feet of black ice, I was sweating profusely, despite the freezing cold. As a matter of fact, I was ready for a cool drink of water and a chance to start fishing. And that’s when I noticed something that is as fresh in my mind today as the moment it happened more than 20 years ago. In the early morning darkness, I saw Al zip up his jacket, start his snowmachine and put away his tackle. Then he hopped on the machine, zoomed right up beside me, flipped up his visor and said, “I’ve tried ’em all. There aren’t any trout here. Let’s move.”

I swear, by the time the sun set that afternoon we had fished about 10 different locations and drilled more than 200 holes. That’s why I can say with confidence that Mr. Al is the fishing equivalent of Tom Brady implementing his two-minute hurry-up offence.

Unless you’re catching fish, it just makes sense to keep moving until you find them. And then when you do find fish, stay on the spot until the action subsides. I like to give myself 30 to 45 minutes, and then move if I don’t catch a decent fish. Similarly, if we’re catching walleye, lake trout, crappies or perch and the action subsides, it’s time to move 30 to 45 minutes after the last fish hits the ice.

It’s so easy to forget that 90 per cent of every lake on the Canadian Shield is a virtual desert. So the principal reason we’re not catching fish is that there are no fish there to be caught.

So follow the lead of Tom Brady, Drew Brees and Aaron Rodgers this winter when there is two minutes remaining and the game is on the line.  Implement a hurry-up two minute offence, and go for the win.