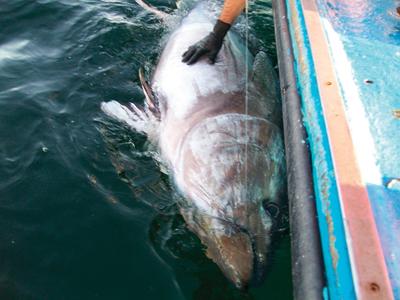 Hottest spot: Wherever MacNeill takes you

Word on the wharf at North Lake was that a giant bluefin tuna had been landed, so I decided to stick around. Boat after empty boat slipped past the breakwater until, a half-hour after dark, the lucky captain finally arrived and his 750-pound fish was hoisted to the wharf. That was in 2002, and by 2010, things had improved. Improved? That’s right. Last year, it took less than two days for nearly 300 commercial boats to land their allotted quota of 130 metric tonnes. That’s almost 400 bluefins, the largest of which topped 1,350 pounds. So, why share these commercial fishing stats? Because you can get in on the action, too, thanks to Captain Jeff MacNeill. From July 26 until the end of September, MacNeill has a licence to operate a catch-and-release sportfishery for these so-called horse mackerel. Last year, within just a few kilometres of the harbour, he had a nearly perfect success rate. London, Ontario’s Tom Miracle boated the season’s best at almost 1,000 pounds; other top catches weighed in at 700 to 950 pounds. MacNeill has been at the game for 14 years and uses barbless circle hooks to ensure a safe release. Not into a 90-minute-plus battle? There are lots of smaller species to also target—and those you can fry up at the end of the day.