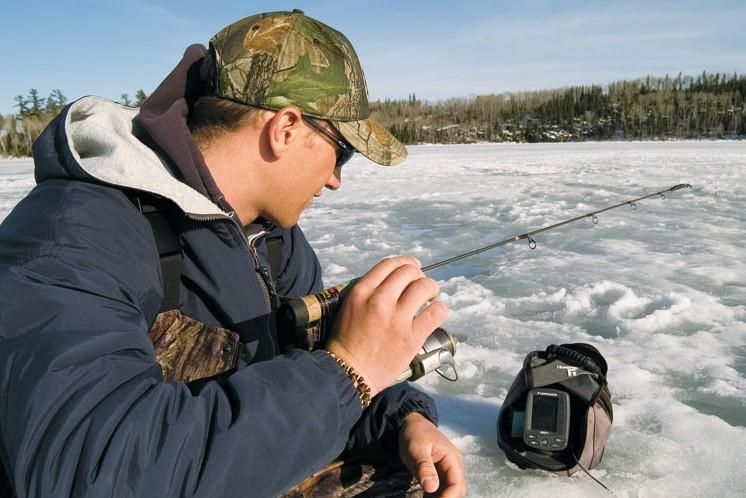 I’m long enough in the tooth to remember when angler Carl Lowrance designed the first high-frequency sonar unit for recreational angling. When it debuted at the Toronto Sportsmen’s Show in 1960, the Fish-Lo-K-Tor looked like something straight out of a science fiction novel. But it was transistors—not computer chips—that allowed Lowrance to construct the compact, portable sonar unit.

Today, many younger anglers have probably never even heard of transistors, yet almost every fishing boat has at least one, and often two or more, sonar displays. The evolution and transformation of the technology has been nothing short of astounding. So, why do so few ice anglers use sonar units? It’s one of angling’s little mysteries.

Actually, it’s an absurdity when you consider that sonar units provide more and better information on the ice than on the open water. I mean, how often can you follow the path of your lure in the water column, and watch fish rise up to inspect it, when your boat is rocking in six-foot-high waves? Heck, how many times do you even do that when you’re drifting in calm water?

Wind, waves and boat movement limit the potential of your sonar unit during the open-water period. Not so when you’re ice fishing. Just drill a hole, plunk down your transducer, and you can tell immediately if there are fish beneath you.

Even when you don’t see something on the screen, it still pays to drop down a lure and jig it a few times to see if you can catch the fancy of a fish from somewhere off-screen. If you can’t, you know for certain there are no fish around and that it’s time to move on.

If you do see fish on the screen, however, you can monitor their attitude and quickly determine how to adjust your tactics accordingly. This is where a sonar unit plays such a vital role in your ice-fishing strategy.

There are two aspects to almost every winter jigging approach. The first is the attracting phase, when you lift your jig, spoon or live bait, pause for a second or two, and let it flutter back down. The second is the triggering phase, when you allow the bait to pause. How aggressively you work your lure and how long you let it rest are questions you can readily answer by monitoring the fish’s reaction on your sonar screen.

Many times during the winter, for example, you can watch as numerous fish approach your lure while you jig it. But if you don’t allow it to pause, often for exceptionally long periods, you won’t feel a bump. Other times, you’ll see the fish literally putting their noses against the bait; if you don’t wiggle or twitch it ever so gently, they won’t commit.

Schooling fish such as walleye, perch, whitefish and crappies are particularly easy to see and monitor because they tend to suspend in the water column to varying degrees. Convincing enough of them to join you for shorelunch, however, can be another matter entirely.

Sometimes, you have to jig your lure a foot or two above the fish, watch as they gather below, then let it flutter through the mob before one of them rushes over and grabs it. Or you may have to attract a horde of fish before ever so gently and steadily pulling the lure away until one of the fish snaps and chases after it. Regardless of your final presentation, your choice is made all the easier by watching the fish on your sonar screen.

Now, if only you could do this during the summer, too.

Improve your ice-fishing results by using the zoom function on your sonar. Most units let you zoom in two to four times, allowing for much greater detail. If you’re fishing in 30 feet of water and consistently seeing fish swimming a foot or two off the bottom, for example, why tie up the screen displaying the entire water column? Instead, zoom in on the specific area of activity, and the essential details become bigger and brighter.