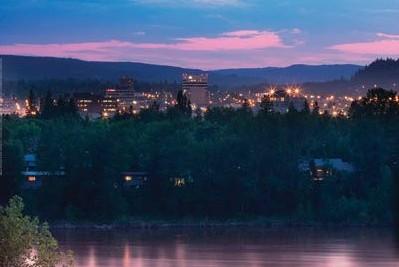 Located at the doorstep of the Northern Rocky Mountain Trench, the Prince George area looks more like the rolling, densely forested Canadian Shield than the heart of the B.C. Interior. But for big-game hunting in B.C., you’d be hard-pressed to find a better home base. The moose population is estimated at 25,000 animals, for example, with some of the best hunting west of nearby Vanderhoof. Mule deer are also abundant throughout the region, while whitetails can be found around the ranchlands to the north via the John Hart Highway. For bighorn sheep and goats, along with elk and moose, head east on the Yellowhead Highway to the mountains around McBride. Then for Stone’s sheep and caribou, as well as good elk and moose hunting, there’s the Muskwa watershed up the John Hart and Alaska Highways. Black bears and grizzlies are numerous throughout the region, as are grouse in most areas, while the fields around Prince George offer good action on geese and mallards. Straddling the crossroads of major east-west and north-south arteries, Prince George is blessed with excellent hospitals, public buses that serve virtually all areas, and an education system that extends from kindergarten to the University of Northern British Columbia. Several shops in and around Prince George cater specifically to hunters, including Armco Machine and Plating, Bon Voyage Sports, Ron’s Gun Shop and E & I Sports.