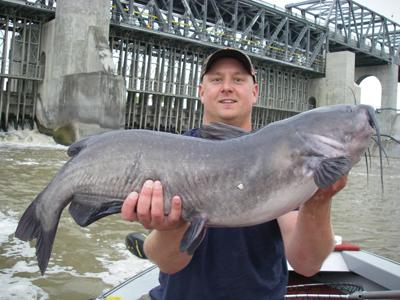 American anglers wet their pants talking about the channel cat fishing in the mighty Mississippi. I can’t imagine what they’d do if they ever ventured north and dunked a bait into Manitoba’s muddy Red River, home to simply the best channel cat fishing in the entire world. Here we’re talking about mammoth fish approaching four feet in length and weighing more than 30 pounds. And you don’t expect to catch just one of these big cats in a season or a lifetime. No, you can look forward to landing several giants over the course of just one day. What’s even more remarkable about this wonderful fishery, which is carefully managed on a catch-and-release basis, is that it shouldn’t even exist. Even during the peak of summer, the Red River barely warms up enough to trigger the channel cats to spawn, and it never reaches the temperature these fish find optimal. Somehow, though, they’ve managed to adapt. It doesn’t hurt, mind you, that the fish take refuge for most of their 20-year juvenile life in enormous Lake Winnipeg, into which the Red River flows. There the channel catfish remain largely inaccessible to anglers until they reach adulthood and finally venture into the Red for the balance of their lives—giants ready for action.