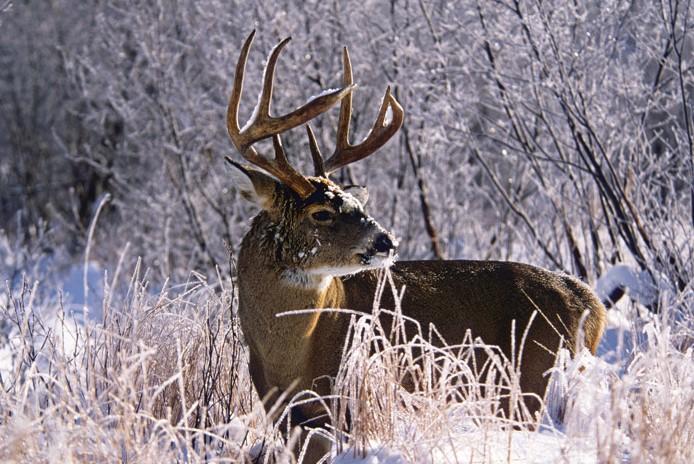 With a deer herd fluctuating between 50,000 and 80,000 head, New Brunswick may not have great numbers, but it more than makes up for that with the size of the deer. Toughened by recurring cycles of harsh winters, the province’s whitetails have evolved into substantial animals, and if the number of bucks listed in the Boone and Crockett record books is any indication, they grow giant antlers, too. There was once even a rumour—soundly discredited by the province’s game biologists— that a number of mule deer had been spirited into the province to crossbreed with the whitetails, thereby giving them the edge in antler development. The combination of big deer and gorgeous hunting country first drew me to the central Saint John River Valley between Hartland and Woodstock many years ago. That’s also why it remains one of my favourite deer-hunting haunts to this day. The region tends to be less prone to the wild population swings experienced in the northwoods counties and, at the same time, has less hunting pressure than some of the southern counties where whitetails are more populous. Located close to the Maine border, the area is a mix of farm country extending back from the river and, beyond the fields, a kaleidoscope of autumn hardwoods and evergreen thickets. Beech trees are surprisingly abundant and, during years of heavy mast crop, there isn’t a patch of fallen leaves that hasn’t been disturbed by foraging deer.

From the time the province’s season opens in mid-September, there are woodcock in the alder thickets along the Saint John River Valley—resident birds that breed and grub for worms and larvae in the black loam of the bottomlands. They’re a challenge for the belled dogs as much as they are for the shooters, but if the weather has been kind, chances are a few tasty timberdoodles will already be in the game bags. Once September slides into October, however, everything changes. Some years, the migration of northern birds starts just a few days into the month. Other years it might be mid-October before the flights arrive. When they do, the number of long-beaks swells tenfold, and the wingshooting is some of the best you can hope for. It lasts until the hard frosts hit in the latter part of the month, driving the flights south. Most any covert is likely to hold migrating woodcock, but not every one does. The trick is having a string of five to 10 coveted patches that you can hit in succession. The chances are always good you’ll find a few local birds, but when you come to a site that has a flight, the chalk marks—those splatters of white goop woodcock expel on the flush—are your clue you’ve hit the jackpot. Resident hunters accumulate these patches over the seasons afield, but non-residents are obliged to hunt with a guide or hunter-host, and they usually have their own preferred hunting spots all lined up.