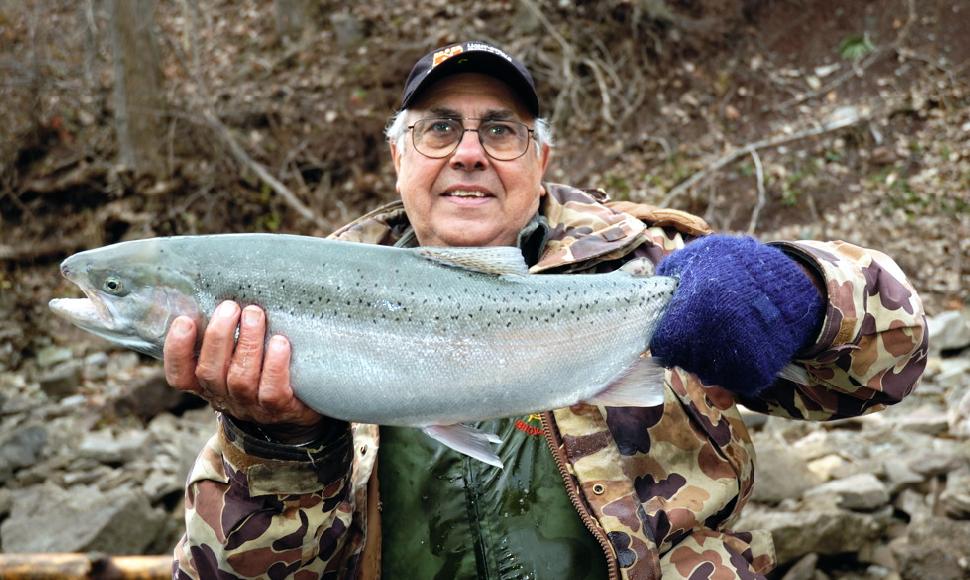 Tony Valeriote with a gorgeous rainbow trout he caught in the Niagara River using one of his hand-made Slinky sinkers.
FishingFishing Tips & Tactics

Sadly, we’re coming to the end of an era as southern Ontario’s Tony Valeriote ceases crafting by hand, his magnificent “Slinky.”

No, not the metal coil toy you played with as a kid, but the finest, most snag-resistant sinker known to man. Indeed, if you’ve never fished with a Slinky—or sandbagged as the system is called—you can’t imagine a more perfect way of presenting live bait and lures to fish that are lying on the bottom of a lake or river, or swimming around a structure that is littered with rocks and debris that eat your jigs, drop-shot rigs and sinkers every time you lower them over the side of the boat.

I’ll never forget the time I fished the Niagara River gorge for steelhead and brown trout with Tony and river rat guide Frank DiMarcantonio. We drifted spawn sacs, yarn flies, and single eggs along the bottom, below the Falls and in front of the massive Ontario Hydro generating stations, where the current is unbelievably swift and the bottom incredibly snaggy. And yet, I swear this is true, at the end of the day I still had the same Slinky on the end of my line that I started the day fishing with.

Tony, Frank and I were using the sinkers as part of a finesse, Carolina-rig, split-shot system with the Slinky sliding freely up and down our main lines above a small swivel. Below the swivel, our eggs and flies were anchored to the end of a three to five foot long light leader.

And it was deadly.

I remember one particular time, when we were drifting along the seams and edges of the current spewing out of one of the massive electrical generating station dams. Despite Frank sitting on his bow-mounted electric trolling motor, with the speed turned up to full power trying to offset the flow, we were quickly pushed downstream. And the whole time we were slipping backwards, we could feel our Slinkies walking up and over the immense rocks and boulders littering the bottom. It was my introduction to “sandbagging” and I was shocked at its effectiveness. At one stage, we caught a bright, silvery steelhead on nine or ten consecutive drifts.

And yet, we almost never snagged bottom. And on the few occasions when we did, all it took was a sharp tug on the line, or motoring up to the obstruction to lift the Slinky out from the crevice.

And remember, we were fishing in the mighty whirlpools below Niagara Falls, one of the snaggiest fishing locations on Earth.  If it works here, imagine what you can do with a Slinky on your home waters.

Indeed, the reason Slinkies are so efficient and effective is because of the way Tony crafts them using ultra-flexible, super strong, hollow, parachute cord into which he carefully inserts high quality, custom-made lead shot.

And while my introduction to the amazing sinkers was fishing for trout in the Niagara River, I have subsequently used Slinkies across the country, substituting them for the slip sinker in a Lindy Rig, bell sinker in a three-way rig, egg sinker in a Carolina rig and drop weight at the end of my drop shot rig. And it is a rare year when I will loose more than one or two Slinkies to snags.

Of course, Tony makes his Slinkies in a variety of sizes and weights including 1/8-, 1/4-, 3/8-, 1/2- and 5/8-ounce. Or, should I say, “made” Slinkies in those sizes as he has ceased making any more and is now selling off the remaining inventory.

As anyone who has ever had the pleasure of meeting, spending time and/or fishing with Tony Valeriote will tell you, he is the epitome of a gentleman, having spent his profession career as a teacher and high school principal in the southwestern Ontario. (As a matter of fact, Frank DiMarcantonio was one of Tony’s students!)

But, he made his mark in the fishing world fashioning the famous Slinky and perfecting the system of sandbagging.

To order the last ever, hand-crafted Slinkies from Tony, (depending on size, they generally cost considerably less than a buck apiece) you can phone him at 905-732-6204 or email him at valeriote1@sympatico.ca.

It will be the best investment you make this year!