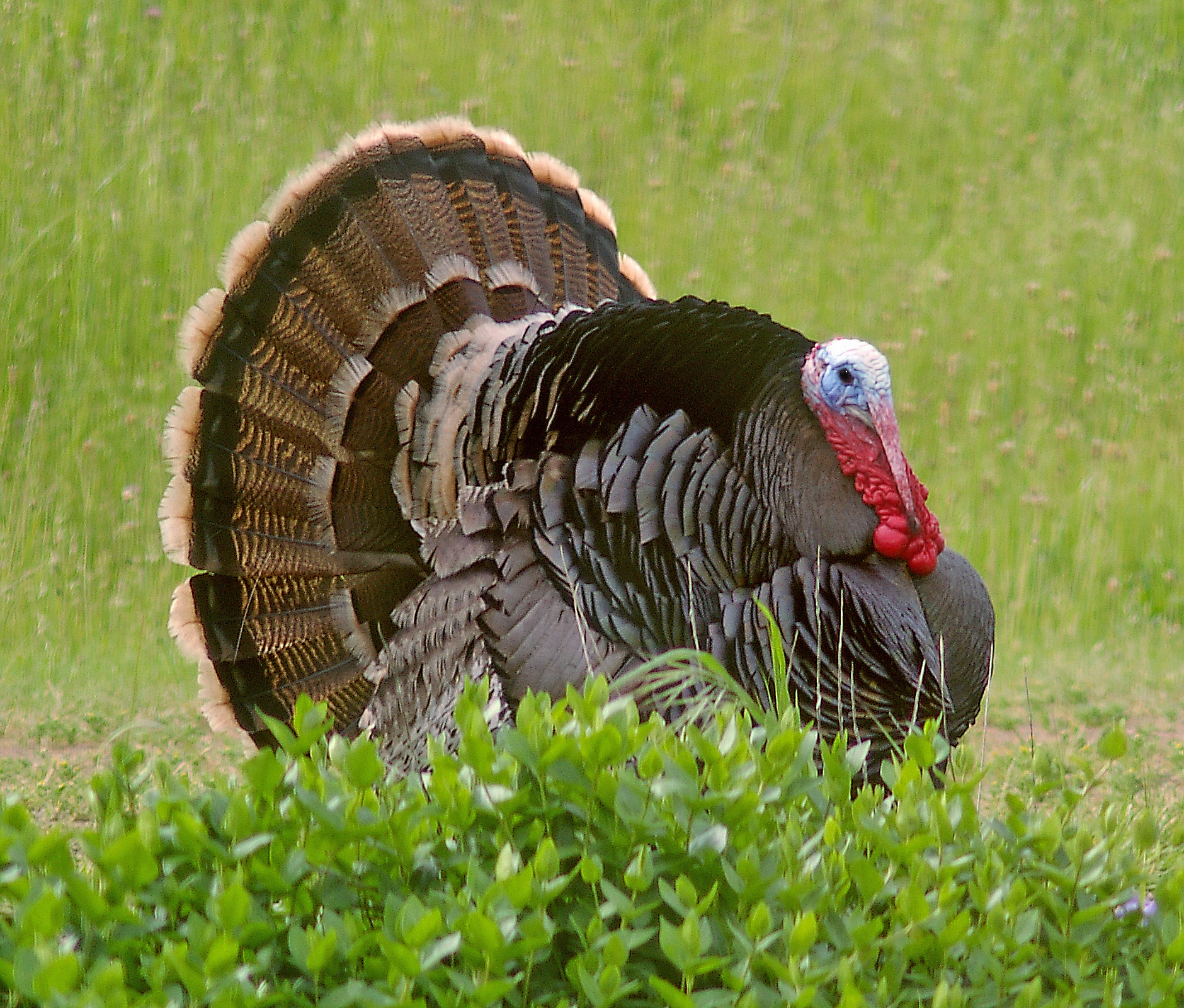 From the green light to green-up, a season-long guide to gunning for gobblers

Although the fields and forests are leafless and bare at the beginning of the season, in the weeks that follow, the terrain will undergo a dramatic transformation, as will the turkeys themselves. Here’s how to stay on top of the changes—and boost yours odds of bagging a trophy tom.

Some turkey experts prefer hunting later in the season, when the thicker foliage provides added concealment. Not me. At the start of the season, there are no leaves or tall grass to obscure your view of approaching birds. Plus, the temperatures are cooler and more comfortable, and there are no biting insects. Most importantly, though, the birds are far more active and vocal.

Here in Canada, wild turkeys are at the northern fringe of their range. Thanks to a slightly shorter summer than they experience farther south, they tend to breed before the forest has finished sprouting its new spring greenery. This works fine for the birds, as their reproductive cycle is timed to ensure there are ample insects available for the newly hatched poults.

Breeding is believed to be induced by the lengthening days of spring—the greater amount of daylight triggers an increase in sex hormones, which in turn launches the birds into their breeding behaviour. This far north, wild turkeys tend to do the majority of their mating during the month of April, with much of it often concluded before hunting season even starts. This was especially true, for example, last spring in Ontario—the mating started so early that the echoes of gobbling toms had all but disappeared by the middle of May.

The birds will remain in their larger flocks until the first hens are bred. By then, the aggression among the males increases significantly, resulting in dispersal. Weaker males are pushed away from the group and, as the days begin to get warmer, the hens also begin to disperse into different home ranges, spreading out to nest.

Early in the hunting season, toms are more responsive to calls of all types. But they’ll also be able to see a fair distance thanks to the lack of foliage. That means you must stay absolutely still until an opportunity to shoot is presented. And by wearing camoufl age and sitting up against a tree, deadfall or farm fencerow, you can easily conceal yourself. Portable ground blinds also make it a snap to hide from sharp-eyed turkeys.

Resist setting up in flat open areas, whether in the woods or fields. Instead, try to find a location that has a hill, deadfall or a thickly treed fencerow. When you call, the gobbler will come looking for the source of the yelps or clucks. If he scans the leafless vicinity of where he thinks the calls are coming from but doesn’t see a hen, he’ll become suspicious, put on the brakes and quickly lose interest. However, if your calls are coming from an area just over a hill, or in thick cover, the gobbler will likely look more closely and move into range.

It’s also a good idea to turn your head away from an approaching tom when calling. This should have the effect of making the call sound as though it’s coming from a bit farther off, luring the tom even closer before he finally stops to begin his strutting dance. Once a gobbler fans out his iridescent tail and starts to strut, he’ll likely expect the receptive hen to approach him. This is your opportunity for a shot. Otherwise, when no hen appears, he may lose interest and walk away. There’s a small chance he’ll come closer, but don’t count your feathers.

I highly recommend scouting during the month leading up to turkey season to try to find the core wintering range for a flock of birds. During the winter, wild turkeys congregate in larger flocks, probably due to the isolated pockets of available food. They’ll remain in these groups right up until breeding begins in the spring.

If you’re fortunate enough to discover a wintering flock, you’ll have a good chance of fi nding the birds in the same place once the hunting season begins. As the season progresses and more hens isolate themselves to nest, however, the turkeys will begin to disperse over the neighbouring countryside.

It’s also wise to find out what foods turkeys eat prior to green-up and where they’re located on the property you hunt. That way, you can find a good place to set up for an ambush. As with deer, turkeys are crazy about acorns. They also feed on beech and pine nuts, and will seek out corn remaining in agricultural fields. By the middle of May, insects should start emerging-and turkeys love to eat bugs, too. Since it’s impossible to pin down the best places to find insects, though, it makes it tougher to predict where the birds will be feeding on them. They will, however, still feed on any remaining mast.

Deploy a decoy. A hen decoy is especially useful during the early season to complement your serenading calls. If you have no decoys in place, be careful not to overcall—that can enable a gobbler to pinpoint you from a greater distance, and potentially hang up out of range.

Mid-May is a transition time for wild turkeys. They’re still breeding, but by now the hens will have started to lay eggs, becoming more solitary and secretive (the hens typically stop breeding once their nests are full of eggs). The habitat can change so quickly at this time of year that it can feel like a whole new experience each time you head afield.

Even though the hens have become quieter, the males will still be eager to seek out any hen that vocalizes interest in romance. This is similar to the post-rut for whitetails; after the majority of does have finished their estrous cycle, bucks begin to hunt for any receptive females that remain. Gobblers will do the same with hens, and they can be quite gullible, too, even if they aren’t as aggressive as they were at the start of the season.

During this transition time, when some hens are still being bred while others may have finished and started to nest, calling remains my preferred hunting strategy. After all, the toms will still be in breeding mode. Set-up locations may be different from those in the early season, though. With the forest starting to fill in, I hunt less around the oak or beech trees back in the woods and begin to gravitate toward forest openings and field edges.

Note, however, that as effective as calling can be, it’s virtually impossible to call in a tom or jake if it’s already in the company of a hen. Your only hope in such a situation is for the birds to move into range on their own as a matter of course. Or, if there’s enough natural cover or a nearby hill or valley, you could try to stealthily relocate to intercept them (for safety reasons, don’t do this on public land or when other hunters are in the vicinity).

Otherwise, you’ll just have to wait it out and hope that your calls and/or decoys will attract a different male bird. Or you could return a day or two later-by then, the same gobbler could be without a hen and therefore far more receptive to your calling.

Don’t give up. At this time of year, toms will repeatedly use the same strutting zones day after day. So if you miss an opportunity on a bird one day, the odds are you’ll find him again for a second chance.

During the latter part of May in the woods, the foliage will have filled in, greatly reducing visibility. To compensate, you have to alter your hunting tactics again—this time to locate and focus solely on the forest openings or fields where the birds prefer to strut, feed and dust.

During the last part of the hunt, the birds’ diet will become much more diverse, making it difficult to pin down preferred feeding areas. By now, they’ll be busy searching out insects to eat, as well as fresh foliage and some grasses. One advantage of harvesting a gobbler during the latter part of the season is that it may be a pound or two heavier, having enjoyed an extra few weeks of foraging on the nutritious new greenery and insects.

Turkeys typically feed twice a day: once in the morning after descending from their roosts, and again later in the afternoon. From mid-morning until mid-afternoon, they tend to loiter in the shelter of the forest, occasionally visiting their favourite dust baths (usually small openings where there’s bare earth). With a little scouting and keen observation, you should be able to find dust baths by looking for turkey-sized oval depressions in the sand or soil. Also look for the three-toed tracks on the exposed earth near the bathing ovals—if the middle toe is longer than the two peripheral ones, it’s a tom or jake.

Dusting areas are my favourite place to hunt during the last part of the season. Every day, when a hen leaves her nest for an hour or two to feed, she’ll also visit her preferred dusting spot to rid herself of external parasites. With most of the breeding finished, the male birds will frequently check in at these locales in the hope of encountering a receptive hen. The gobblers will even sometimes dust themselves.

While hunting in these areas, I still do some calling, but nowhere near as much as I would during the fi rst couple of weeks of the hunt. For starters, the birds themselves are not vocalizing as much now that the breeding is largely over. As well, the increased foliage muffles sound, making it more challenging to hear birds when they respond. It also makes quieter calls less effective. While louder cutts, gobbles and yelps can still be heard over a distance, the more alluring softer yelps will only be effective at close range.

Instead of calling, then, I prefer to sit quietly and let birds come in on their own. If the dusting ovals that you find in the dirt are fresh, and get stirred up each day or two, then you know with confidence that the birds will return. And as far as timing goes, the birds will almost always appear sometime between midmorning and mid-afternoon-at the ready to help fill your tag.

Cover up. Make sure to wear a head net when hunting during the last part of May, as the voracious blackflies, mosquitoes and deer flies can make sitting motionless for hours nothing less than a human sacrifice.