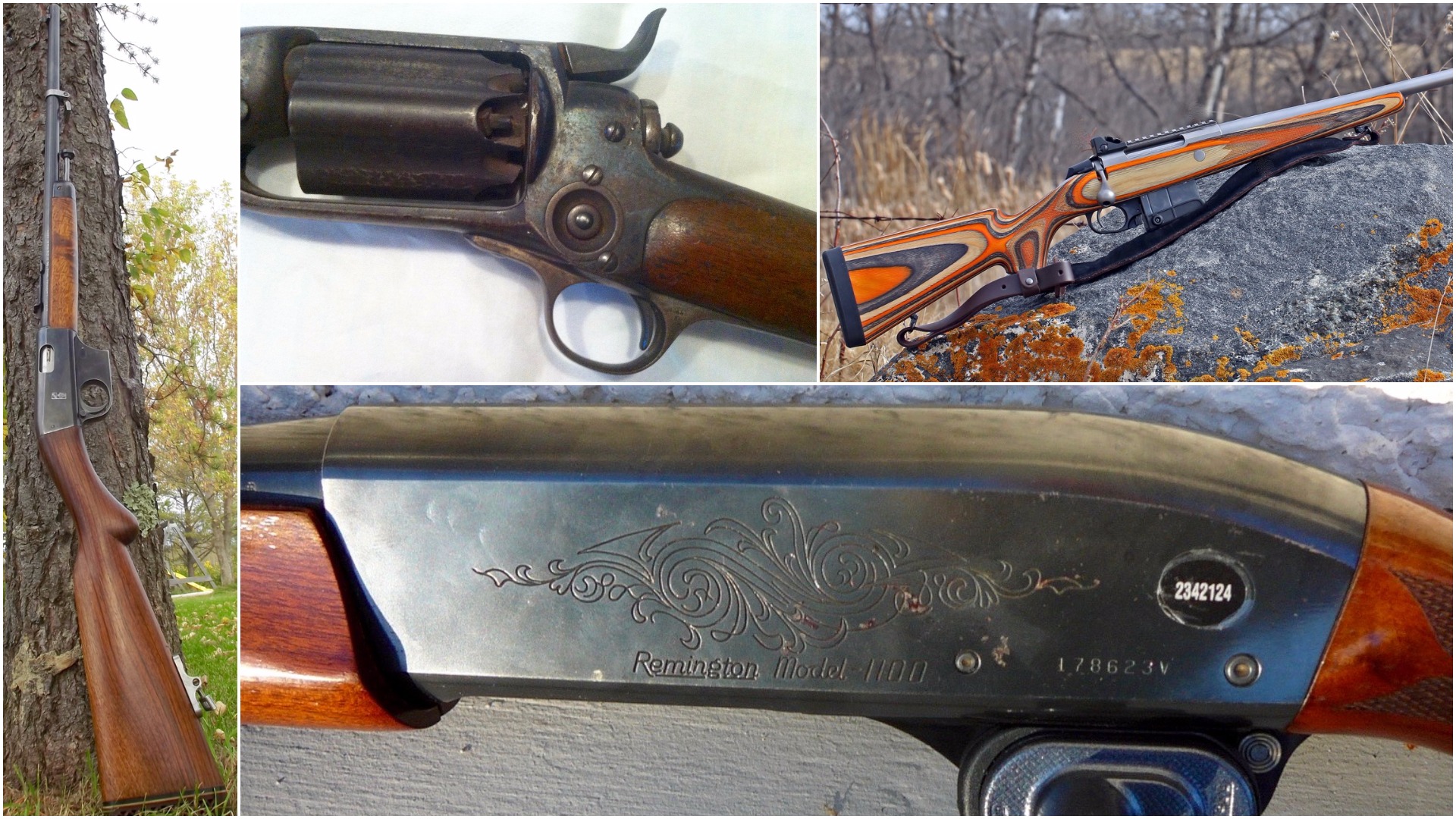 The story behind a Colt revolving rifle, plus a Unique French .22, 12-gauge-dealing and more

I have this French-made Unique .22 takedown rifle (above). I believe it’s a model V49, named for the year it was marketed, not the year of design. I understand the V49 was manufactured from 1938 to 1951, when it was replaced with the new and improved model X51. However, I’ve never seen another Unique with a pommel grip like this one. And I’ve been unable to find any info on the serial number to date the rifle. The recoil pad is a Pachmayr, which is an aftermarket addition, but the stock is original (both it and the forearm are stamped with the same number, 113). Can you shed any light on the possible age and value of this rifle?

Unique made firearms from 1923 to 2006, first at Hendaye, France, then in Patin, France, after 2001. Its products were typically of high quality. One of the best-known Uniques in recent years was the DES line of high-grade match .22 pistols for ISU/Olympic competition shooting.

The references I found indicate the model V49 was made from 1949 to 1951. Unique made semi-automatic .22 rifles before 1949, but from what I can find, they were of a different design. As you note, the V49 was replaced in 1951 by the X51, which remained in production into the 1980s. The main difference with the X51 was that it had an optional single-shot feature, which held the bolt back after each shot until it was manually released to chamber a fresh cartridge. The quality of workmanship, materials, fit and finish was very good on both models. Some collectors say they’re the highest-quality .22 semi-automatics ever made, better even than the Winchester 63 and Browning takedowns.

Unique rifles had a lot in common with the Winchester 03/63 design, although they had a detachable magazine instead of the Winchester’s tube magazine located in the butt stock. Both five- and 10-shot magazines were made, but apparently both are now very difficult to find (the five-shot versions in particular), and expensive if you do find them. I’ve even heard of collectors buying complete rifles just to get the magazines.

I don’t know of any records about the year of production by serial number. I assume from the photos your rifle is serial number 113, which would make it one of the first made in 1949. I can’t find much information on recent sales to provide an estimate of the value, although one recently sold at an auction in Scandinavia for 228 euros, which is equivalent to about $320. It’s an interesting rifle and should draw the attention of rimfire collectors. 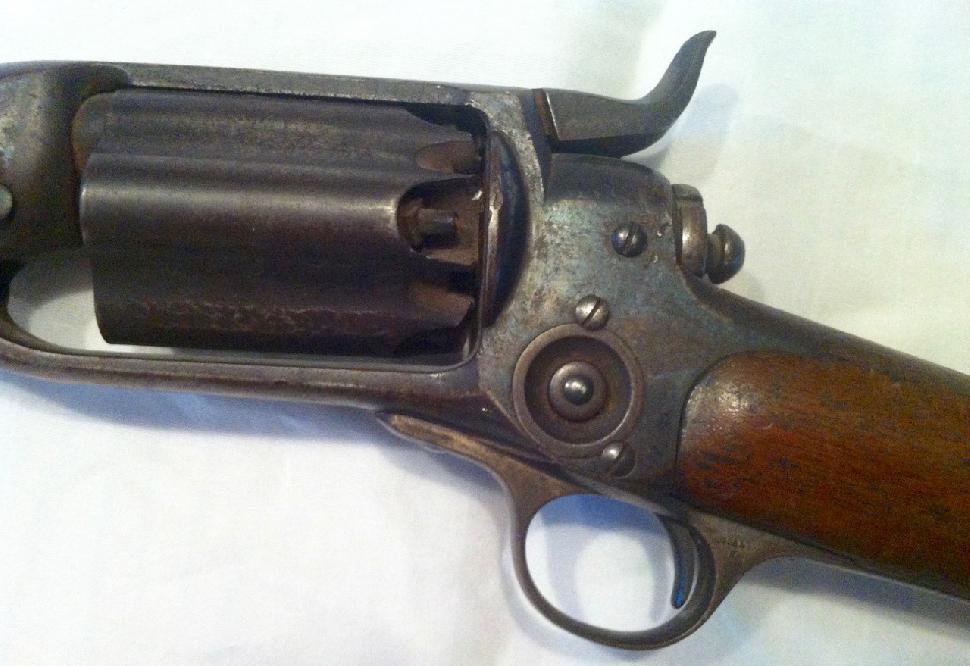 My parents recently gave me a repeater rifle that belonged to my late grandfather (above). It’s marked “Col. Colt Hartford CT. USA, 56 Cal., November 24, 1857.” It also has been stamped #154 by the U.S. Army. I’m interested in knowing more about the history and value of this gun.

You have a Colt 1855 revolving rifle. Approximately 18,400 of these rifles were made between 1856 and 1864, and of those, 9,310 were acquired by the U.S. military for use in the American Civil War. These guns are very much in demand with Colt collectors, though the values seem to have stabilized somewhat in the last two or three years owing to the tougher economic times. The condition of the gun is critical to its value. I recently learned of one in near-perfect condition that was expected to bring in US$20,000; it sold for US$45,000 at a U.S. auction.

Your rifle has traces of its original finish, though the photos also show considerable surface rust and some pitting. Nonetheless, considering this model is now 160 years old, with probably only a few thousand like it still in existence, I’d be surprised if it didn’t fetch US$7,500 to perhaps US$10,000 at a U.S. auction.

I couldn’t find any information on recent sales of Colt 1855s in Canada, but I would expect it to go for about the same amount in Canadian dollars at a firearms auction here (see www.outdoorcanada.ca/gunauctions). I’m sorry for not being more precise, but with very rare items such as this, there’s really no way of knowing the exact value until it actually sells at a well-publicized auction.

Could you please suggest a value for my Remington Model 1100 semi-automatic 12-gauge, which was manufactured in 1966 (above)? The 30-inch barrel has a full choke, and the gun accepts shells up to 2¾-inch. There are some rust spots on the receiver, and there’s a crack in the forearm that extends for about one-third its length. The gun has not been fired for about 25 years. My neighbour is interested in buying it, so I’m wondering what a fair price would be.

The Remington 1100 was one of the most successful and popular semi-auto shotguns ever made. I don’t have total production numbers handy, but it was certainly in the millions. This means the design is essentially sound, and service and spare parts should still be readily available.

Your shotgun doesn’t have any particular collector value at this time, so its value is as a practical sporting firearm. As such, it has some strikes against it. The small amount of rust freckling I can see on the receiver wouldn’t concern me much, as it doesn’t affect performance, and I imagine it could be readily removed. Of more concern is the cracked forearm. It could likely be repaired with epoxy if the owner doesn’t mind the repair being visible. Left as is, it will likely get worse until the forearm needs to be completely replaced, assuming Remington even has a replacement available.

Another possible drawback is the 30-inch, full-choke barrel, if the buyer is planning to use the gun for waterfowl hunting with steel shot. Remington doesn’t recommend using steel shot with older full-choke barrels, and in any case, steel shot generally doesn’t perform well in full chokes. If such use is planned, a gunsmith would probably have to either modify the barrel for interchangeable chokes, open up the full choke a bit or replace the barrel entirely with one designed for interchangeable chokes.

The Canadian Rangers were formed in 1947. For 70 years, their issue rifle had been the Lee-Enfield No. 4. Mk. 1 in .303 British. With inventory of both rifles and spare parts running low, a search began for a new rifle, leading to the adoption of the C-19, which went into active service just last year.

The C-19 is essentially a heavy-duty, tough and reliable bolt-action hunting rifle chambered in 7.62x51mm NATO/.308 Winchester. It’s intended as a survival rifle for protection against predators and for taking game for food under the extremely harsh conditions often encountered in the Canadian Arctic. Based on the Tikka T3 platform, the rifles are being made and assembled under licence by Colt Canada.

The newly introduced civilian version, the Tikka T3x Arctic (above), is virtually identical, except it doesn’t sport the Rangers emblem on the stock, which is also a slightly different colour. It’s a very practical hunting rifle, with potential collector value. Darren Treble, owner of Avonlea, Saskatchewan’s Prairie Gun Traders, says the rifles sell out as quickly as he gets them in stock. Frankly, this surprises me, considering they’re priced around $2,800 and you can buy a quality hunting rifle for a lot less, it would seem there is already considerable collector interest.