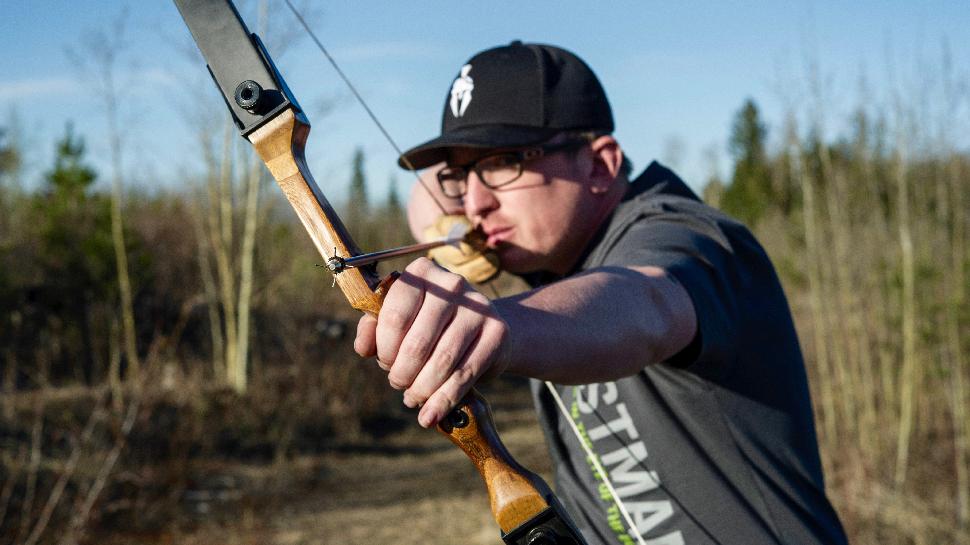 To Master the Traditional Bow, Hit the Woods for Some Stump Shooting

Do you struggle to shoot accurately using traditional archery equipment? If so, you’re not alone—recurves and longbows are commonly considered the most difficult bows to master. With today’s compounds, you can have a beginner set up and shooting tight groups within a day, but if a newcomer can pick up a traditional bow and simply keep all the shots on the paper target at 20 yards, that’s better than a lot of other archers that have been shooting for years. It’s just that tough.

No, to become truly proficient with traditional bows, you need plenty of practice. That could means hours and hours of honing your skills at the range, but for my money, nothing beats getting outdoors and shooting some stumps.

Stump shooting is as simple as it sounds: You simply go for a walk through the woods and shoot at stumps. Sounds boring right? Not at all. It’s quite the opposite, in fact. Plus, stump shooting is one of the most productive ways to increase your accuracy as an instinctive archer. Not only does it help you focus on any number of different targets—rather than a simple paper target—it also helps you hone your shooting skills at various distances and from different shooting positions.

I’ve shot at stumps, sticks, leaves and even old bones at distances varying from three to 100 yards. I’ve laid on my back, shot from my knees and, most importantly, twisted in awkward body positions to make a shot on a target. Why do this? Because it’s not the everyday monotony of standing upright, shooting at 20 yards in an indoor range that gets you ready for hunting. With stump shooting, you’re forced to guess yardage and pinpoint various targets—key skills when it comes to actual hunting.

When I think of traditional equipment, the first thing that comes to mind are wooden longbows and shafts. For stump shooting. however, you can use just about any traditional archery equipment you like—I’ve just found the outcome to be far more beneficial when shooting equipment that doesn’t have sights and rests. It’s pure instinctive shooting.

While there are no set rules, you need to use the proper arrow points while stump shooting. If you use the wrong set-up, be prepared to spend the majority of your time afield looking for the lost arrows. And if you can’t find them, be prepared to lose a lot of money. To avoid this, the judo point is the recommended arrow head. In the event of a miss, the head’s spring arms are designed to catch on the grass, as well as prevent the arrow from skipping along the forest floor or burying into the ground.

Due to the relaxed environment generally associated with stump shooting, it can also be a great way to get your friends and family outdoors. When you’re stump shooting, there’s no such thing as scoring or bad shots—the only competition to be had is if you and your buddies are making friendly bets.

Traditional archery can be frustrating at times, especially when you’re not shooting well. By getting out and flinging some arrows at stumps, however, it’s almost as if you’re hitting the reset switch. Stress and frustration dial down while enjoyment goes up. Who wouldn’t want that?

Whether you’re just looking to get outdoors or wanting to break up the monotony of the indoor range, stump shooting can bring an added level of enjoyment to traditional archery. So, the next time you’re thinking about getting in some practice, grab your buddy and head out to the woods. You’ll be glad you did.

Whether you’re shooting a wooden, aluminum, carbon or fibreglass arrow, you need to check it for damage after each shot. To do this, simple grasp each end of the arrow and flex it. Also run your fingers along the shaft and visually inspect it. If there’s a crack, you should be able to either see, feel or hear it. There’s typically no damage to arrows when you’re hammering stumps, especially when shooting traditional equipment. You’re better safe than sorry, though—if a damaged arrow blows up when you shoot, it can be devastating.

B.C. contributor Nick Trehearne is always looking to up his game.