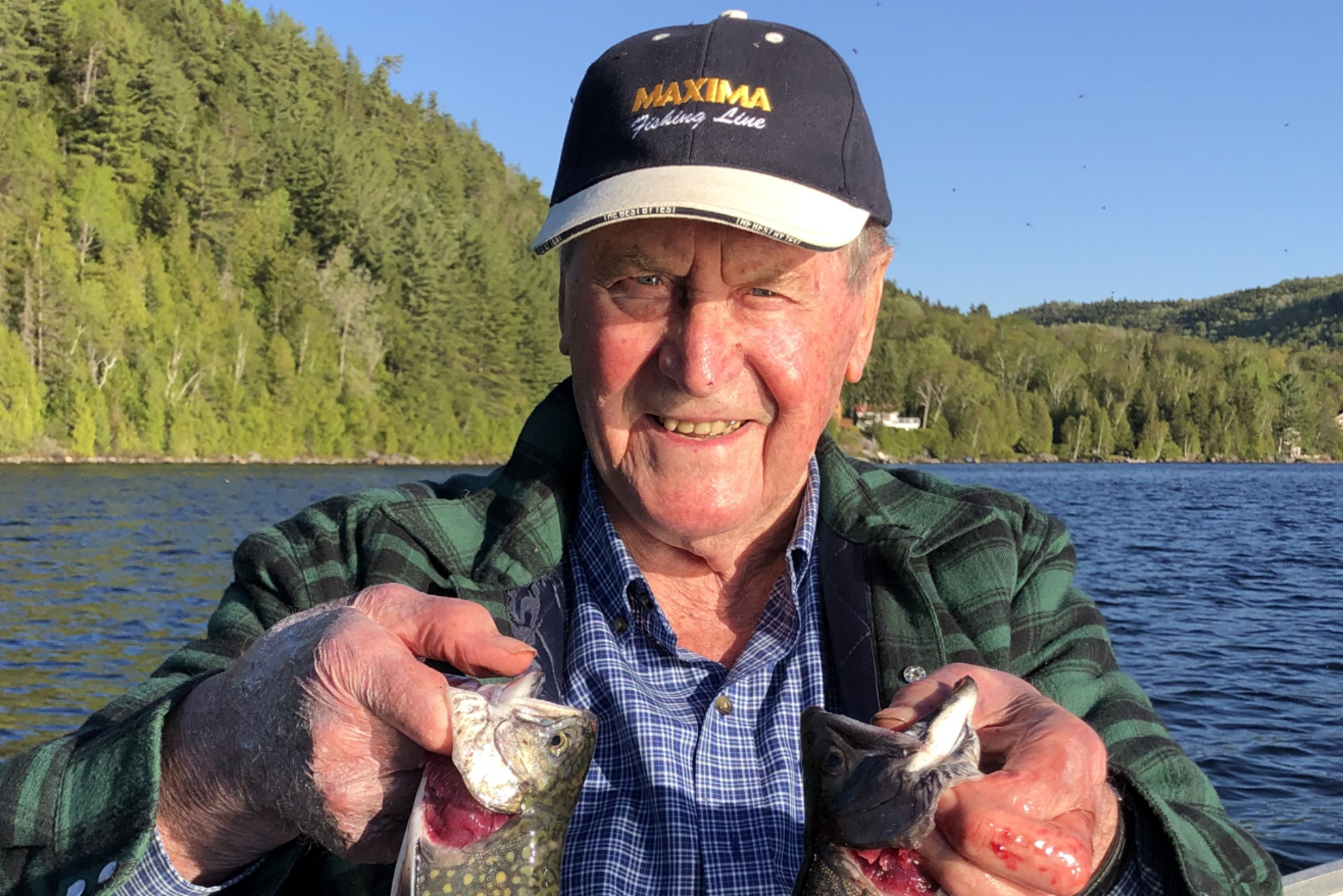 Getting a jump on Father’s Day, and the fish!

Sweeping up brook trout, with Dad

It is Father’s Day this Sunday, and good friend Mark Stiffel got an early start on the celebrations. Mark’s father, Arnold, turned 90 years old on May 31st and he had only one wish when he roared past the milestone while opening up the family cottage on Lake Clair in the Laurentians, an hour northeast of Montreal. “I want to catch another trout, in my lake, in my 90th year,” he told his son.

So, Mark gathered up the fishing gear, assembled the fly rods and the father and son teamed swept up speckled sapphires using the same technique that Arnold had showed Mark when Mark was a youngster. It is also the same technique that Mark showed me and that we employed to perfection on several gloriously warm fall days at La Réserve Beauchene several years ago. But I have to caution you: if you’re a fly-fishing purist, read no further. On the other hand, if you enjoy catching trout, well, grab a pad and pencil and make notes. The technique is crazy good. 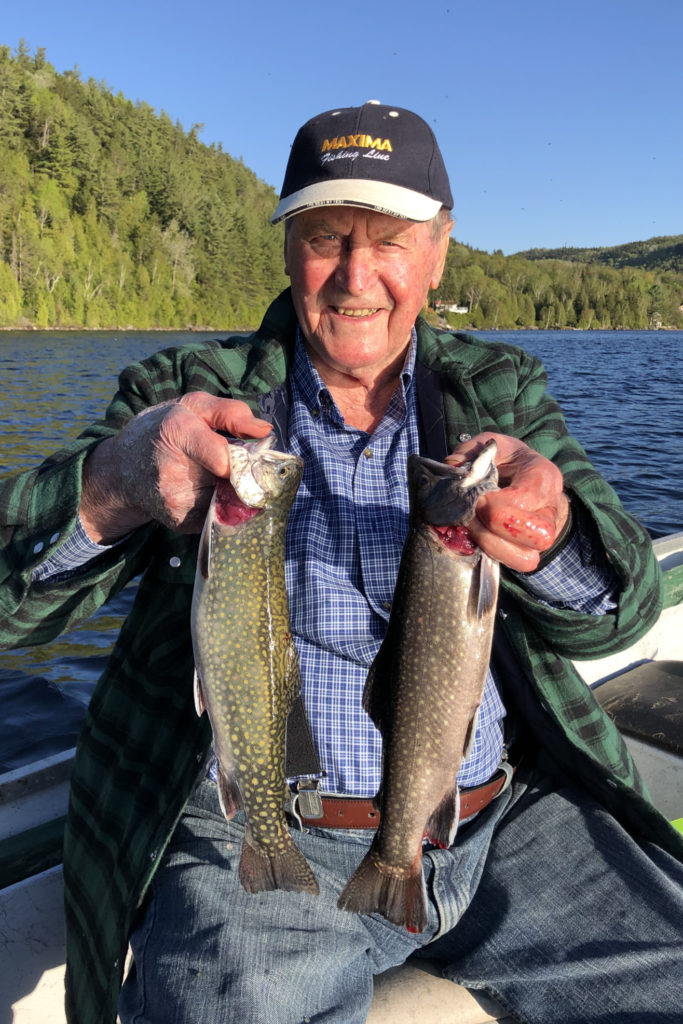 “I always attach a full (27-yard) Maxima leader wheel to the full sink fly lines and backing on our nine-foot 7- and 8-weight fly rods,” Mark told me. “I also like using large arbour or multiplier reels. And we always run two flies, one tied in line and the other trailing about three feet behind.”

When Mark and I mopped up on the brook trout at La Réserve Beauchene, we relied primarily on Muddler Minnows, but Mark and Arnold also fish with small streamers if they know there is strong minnow population in the lake. Their favourite patterns include the Grey Ghost, Mickey Finn, Memphremagog Smelt and Maynard’s Marvel. Oh, and they always sweeten the flies with a leaf worm, better known as “garden hackle.”

“It is important to run a full sink fly line, and not a sinking tip or floating line,” Mark says. “The presentation gets down about three to four feet when you troll slowly or paddle a canoe. Leaf worms are also the best because they are small, tough and stay on your hook.”

When Mark and I trolled the tandem flies, we let out our leaders and all but two or three wraps of fly line, which amounted to about 170 feet trailing behind the boat. And it was perfect as it allowed any trout that were spooked by the boat to swing back behind us and settle down before the flies appeared in their wheelhouses. 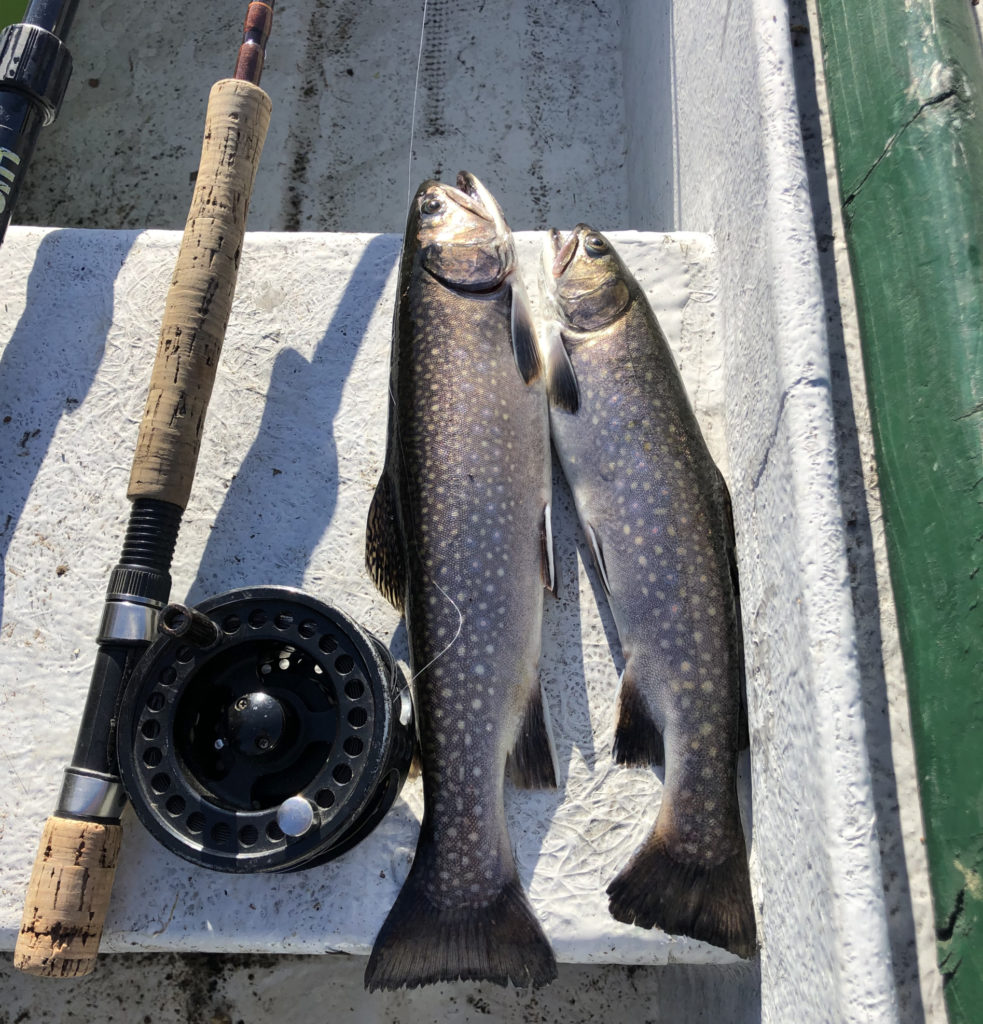 “Dad and I use six-pound test Maxima fluorocarbon or brown Chameleon line in the tannic stained trout waters around the cottage,” Mark said. “But I use the same technique in the spring, in the Eastern townships, for browns and lakers. When I do that, I move up to eight-pound test Maxima Ultragreen because the fish are bigger and the water is clearer. I catch lots of lake trout and northern pike up to 15 pounds and scores of trophy smallmouth bass in the four and five pound range.

“On the weekend, fishing with Dad, we landed 16 speckled trout in an easy three hours of trolling, within sight of the cottage. We kept eight for dinner and dad was in his glory. He lives to fish and he passed along the passion to his son. He has even updated his bucket list,” Mark added with a chuckle. “Now he says, ‘I want to catch another trout, in my lake, in my 91st year.'”