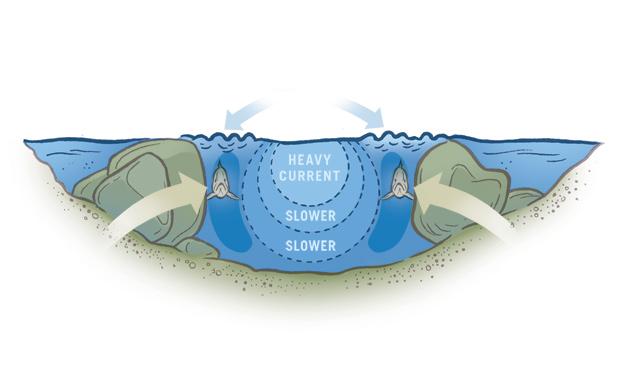 The anatomy of a river

With their endless twists, swirls, calms and ripples, rivers are constantly changing entities. I become absorbed in watching the moving water, speculating what sends the tendrils of current careening off at irregular tangents—and searching for the ghostly movement of a finning trout.

Long ago, I learned that fish take up only a tiny portion of a river’s subsurface domain. And to fish effectively, I also learned to concentrate on constantly keeping my lure or fly in just one per cent of that fluid element, the part that ’bows, brookies, browns and cutties alike thrive in. So, where is that one per cent?

Stand by the bank of a free-stone river on a still evening and listen—you can actually hear the river hiss. That’s the drag of the current against the shoreline, and it gives rise to a concept known as “laminar flow.” Basically, it sets out that flowing water is made up of layers moving at different speeds, the slowest being the one in direct contact with the river bottom, where the drag is at its greatest. Above it is a layer that flows slightly faster because it’s not subject to the same degree of drag. It in turn provides lubrication for the layer above it, and so on until you come to the fast-flowing surface layer in the middle of the river.

Between these layers, the creatures of the river can find a soft current to suit their needs. Now throw in a few boulders, some ledges and perhaps the odd blowdown to send the current careening off at odd angles, and you get the distorted spurs that form the seams and slots and riffles and runs of the river. These are the places where trout truly feel right at home—that magical one per cent area of the river where you want to keep your presentation.

A riffle is an area of broken surface water where the current runs over a narrowing gravel or cobblestone bottom. This is classic water when you’re hunting for trout. Fish will hug the edge of the broken water, feeling secure that they’re difficult to see from above while they wait for food to be carried downstream through the faster water. When food does pass by on this conveyor belt, a fish darts out, grabs the morsel and calmly resumes its position in the lie.

To find this sweet spot, take a look at the components of the bottom. The sandy patch along the edge of the riffle indicates water that is too slow, too unbroken and likely too shallow to hold fish. Out in the main current, the bed is washed clean of sediment and algae. Between the two, however, is an area of moderate current where feeding fish are most likely to hold.

Fish the riffle from a position upstream, staying well back to avoid spooking the trout. Keep the presentation small and cast downstream at an angle that will drift your offering toward shore.

For dry-fly fishing, you can approach the lie from downstream with less likelihood of spooking fish. Start below the riffle and cover the water progressively farther out, then move upstream  a couple of steps and begin again, holding your casts to your  side of the riffle as you work your way up to the head.

Runs are recognizable by their long stretches of rippled water. If it were possible to stop the flow of water for just a moment, you would see a stretch of river bottom littered with rocks the size of basketballs on smaller rivers to medicine balls on bigger waters. The lee side of each one of these rocks can provide shelter for trout, and each one pushes the current up to create a wave on the surface. Put enough of these waves together and the recognizable pattern of a run becomes apparent.

I like working long runs of broken water because they almost always produce fish, and they’re easy to cover methodically with a wet fly or lure. Look for runs alongside gravel bars, often in straight stretches between pools. Best is where the river has just enough decline to stay apace of a person walking at moderate speed without working up a sweat.

Pools of deeper water  develop where the entire main flow of a river is disturbed, usually by a rock face, or sometimes by a particularly heavy set of rapids. Most pools consist of a head where the current enters, a slack water segment where the water is deepest with often barely perceptible current, and the tail-out where the outflowing current picks up once more.

There might be a run above the head, which would definitely be worth fishing down to the point where the current dissipates into the pool. I’ve not had much luck in the slack water, maybe because I tend to work it with just a few cursory casts. I do start fishing carefully, however, where the pool shallows out. The same goes for the tail-out, which may have a riffle where feeding trout linger—at the ready to take my offering.

Also known as buckets, pockets are easy to recognize: they’re usually about the size of a garbage can lid and they feature the quintessential interface of fast and slow flows that shows either as a slick on the surface or, more often, as rippled water. Usually, the pocket is a hole scoured out by currents breaking over a boulder, but it could also simply be the lee of a submerged obstacle. The fish tuck themselves into the soft water behind such obstacles and use the current to plane effortlessly up through the water column when something edible comes into sight.

Many’s the time pocket water has saved the day for me on heavily pressured rivers. Typically, the best buckets are found a hike away from the parking lot—they’ll be good for a fish or two and there’ll be nobody nearby to interfere with your drift. Three or four well-placed casts should adequately cover a pocket. If nothing shows, move on to the next patch of likely water, since fish in these areas are usually quite aggressive. But always remember to pay a return visit, whether it’s an hour or two later or the next day—by then it could very well be holding a taking trout.

hen an obstruction such as a boulder, rock face or a blowdown deflects the current, three rates of flow develop: the normal flow of the river; an area of almost calm frog water behind the obstruction; and, between the two, a narrow band of broken water and intermediate current extending downstream. That seam provides cover, well-oxygenated water and reduced current, so trout will take up a feeding position along it, letting the food come to them. The neighbouring calm water will usually be sandy or dark with decaying organic material, but at the seam, the sand or gravel will be scoured clean by the current.

Seams are fundamental to effectively fishing a stretch of river, and they’re surprisingly productive. However, they can be hot one day and dead the next. A change in water levels and flow will, at the whim of the river, either create seams or erase them, or set them too deep or too shallow to be of interest to  feeding fish.

Because of this transient quality, I like to fish a seam quickly with downstream quartering casts that will drift my offering through the prime water. I only pick up for the next cast once my line is in the frog water close to shore—that way, I avoid spooking the trout with the cast.

When two obstructions such as large boulders or ledges lie relatively close to each other, the flowing water squeezes between them, creating an area of softer current just downstream. This is a slot. Depending on the water level, the obstructions could be just below the surface or covered by a foot or two of river. In the latter case, the pinched current wells up to cause a narrow strip of waxy water on the surface. You can usually identify the slot because it’s generally deeper than the surrounding water, making it appear darker.

There may be fish in the cushion of soft current on the upstream side of the obstructions, but the sweet spot is usually inside the slot behind them. Aggressively feeding trout will rush forward into the slot to nab a nymph or other creature riding the flow, but the fish are more likely to lurk lower down in the slot. With that in mind, fish the structure carefully and completely. Slots seem to produce better in low-light conditions—early and late in the day, overcast skies, stained waters—likely because they typically provide less cover than other structures.