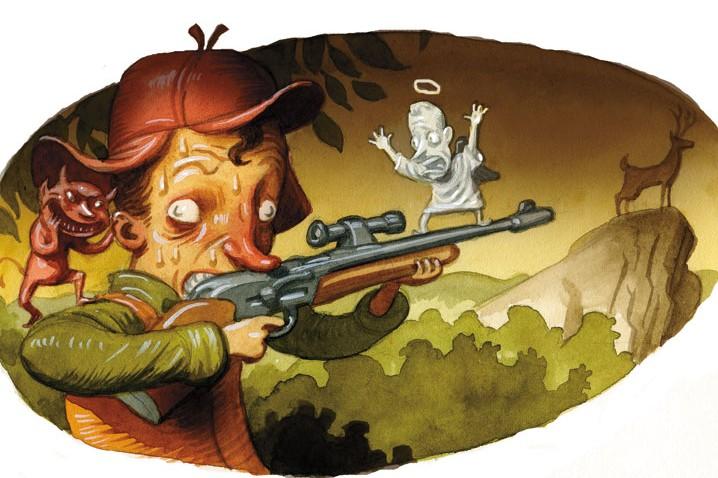 The ethics of hunting

It may be legal, but is it ethical?

The biggest buck of your life falls to the crack of your rifle, just before noon on opening day. Then you notice blood on the trail and realize the animal had already been hit earlier in the day. An excited, winded hunter soon runs up and tells you he shot the buck an hour ago and was about to recover it. Whose deer is it?

You’re having lunch in your hunting cabin, when your cellphone rings. Your buddy tells you he scared up a big buck on his way home and that it’s heading down a shelterbelt a few hundred yards from your location. If you hurry, you can get into position for a shot as the deer heads for heavy cover. Do you?

Both of these situations pose legal and ethical dilemmas for the hunter. And they raise questions. While regulations may change from one jurisdiction to the next, do ethics? Can certain things be legal, yet unethical? And how do we know where the lines are?

For most of us, our ethics were initially shaped by our families and peer groups. But to really help navigate some of the grey areas hunters may encounter, there are several groups out there that strive to promote ethical behaviour afield. The Izaak Walton League and Orion, The Hunter’s Institute are two, but perhaps the best known is the Boone and Crockett Club.

Established in 1887 by Theodore Roosevelt, the club originally set out to protect wildlife from market hunting while promoting the responsible, sustainable use of natural resources. Among its first orders of business was the establishment of a code of conduct for hunters. While the code has evolved over time, it remains at the core of the club’s values.

Of the above two scenarios, only the second one is an easy call—at least as far as the Boone and Crockett Club is concerned. It frowns upon hunters having an “improper advantage” over their quarry, and cellphones certainly qualify as just that. And in some jurisdictions, they’re even illegal.

The first scenario is trickier. On the one hand, I certainly see a case for the hunter who first wounded the deer to claim it. But what about the second hunter? Most jurisdictions require hunters to notch their tags immediately after a kill-this would put him in a legally precarious position if he decided not to tag the animal and instead try to find the person who first wounded it.

The one part of Boone and Crockett’s code that might speak to this situation is what I refer to as the Golden Rule of hunter ethics, a measuring stick against which all questionable situations can be judged: “Exercise a personal code of behaviour that reflects favourably on your abilities and sensibilities as a hunter.” It reminds me of when I was a teenager, and my parents asked me to behave in a manner that would make them proud.

In that spirit, as we head afield this fall, let’s all try to make decisions that will make everyone proud.

The Boone and Crockett Club defines fair chase as “the ethical, sportsmanlike, and lawful pursuit and taking of any free-ranging wild, native North American big-game animal in a manner that does not give the hunter an improper advantage over such animals.” So, what exactly does the U.S.-based organization mean by “ethical”? Herewith, Boone and Crockett’s code of conduct.