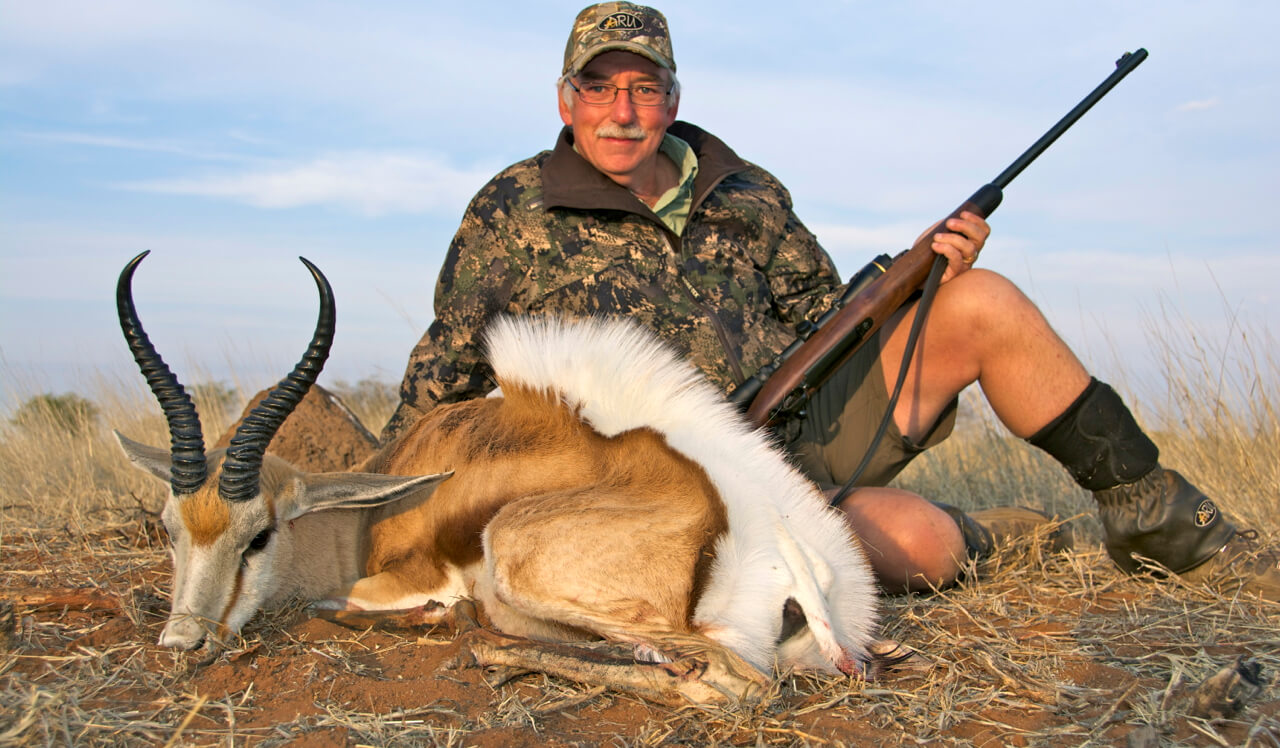 Shoot a buck? Check. Topple a brace of birds? Check. Land a fish? Check. All in one day? Check. How a Canuck hunter took on a Scottish hunting and fishing challenge—in Africa

Namibia is one of the last places that comes to mind when thinking about catching fish—a country best known for its great deserts, the Kalahari and the Namib, doesn’t exactly scream angling. Still, I was keen to give it a go. I’ve always been an optimist and, fortunately, I suspect that Danene van der Westhuyzen must be one as well.

Danene and her husband, Gysbert, own and operate Aru Game Lodges, a hunting safari operator in Namibia, and when I suggested to her that I wanted to pursue a Macnab challenge on my hunt this past September, she was immediately on board. A Macnab challenge? And what does it have to do with hunting, let alone catching fish?

It all dates back to the 1925 novel John Macnab, by Scottish writer, historian and politician John Buchan, who, between 1935 and 1940, served as Canada’s 15th Governor General. The book centres on the exploits of three bored members of London’s upper crust seeking a little excitement.

Using the collective cover name of “John Macnab,” they send letters to three prominent Scottish landowners, warning them that they intend to poach two stags and a salmon from their estates. They sweeten the deal by offering to donate £100 to charity if they get caught; if they succeed, however, the landowners must donate £50 instead. Each of the challenges is accepted and the game is on.

Today, the Macnab challenge is still alive, although poaching is no longer a part of it, replaced instead by fair chase. The challenge is quite popular in Great Britain, where there are several variations of the specific species involved. For example, the “Classic Macnab” now includes a stag, a salmon and a brace of grouse, prized quarry in the Scottish Highlands.

Recently, the challenge has been gaining a following in southern Africa. There, the Macnab requires that an individual shoot a big-game animal, a brace of game birds and land a fish all in one day, again employing fair chase tactics.

Having hunted in Africa on three previous occasions, I’ve taken many of the big-game animals that interest me and can withstand the scrutiny of my banker. So on this trip, I was keen to hunt birds as well as big game, and that led to the notion of pursuing southern Africa’s version of the Macnab.

And yes, that also demanded catching a fish in the largely desert nation of Namibia.

The nation of Namibia hugs the Atlantic coast, bordered by Angola, Botswana and South Africa.

As a prelude to the taking the challenge, I first enjoyed five days of hunting with my professional hunter, Stephan Joubert, taking an eland, a kudu and a steenbok, along with a wide assortment of upland game birds. Stephan, in his mid-20s, was born in South Africa and raised in England before moving to Namibia in 2012 to begin his career as a PH. An avid wingshooter who worked through his teens at a British shooting club, Stephan was the ideal candidate to guide me to a Macnab.

As we got to know each other, he revealed his growing excitement about the challenge. In fact, as I was to discover, he’d been texting pals in England about the opportunity to guide a colonial in the effort.

We were up early on Macnab day—our plan required that we have our big-game animal and birds in the bag before 10 a.m., as we had a three-hour trip to the nearest legitimate fish-holding water. Fellow PH Pedri Enslin joined us, and by 6:30 a.m. we were on the road, with Pedri at the wheel of the Land Cruiser and Stephan gauging the wind and making last-minute tactical decisions.

I was just happy to be along for the ride. Hell, I was on a vacation of sorts, and had nothing to lose if we weren’t successful. And in the spirit of John Macnab’s three fictional British members of the upper class, I was simply looking for an interesting and exciting challenge. For Stephan and Pedri, however, it had become a matter of professional pride.

Twenty minutes later, Stephan and I walked into the wind in search of a trophy springbok, the quintessential gazelle species of southern Africa’s arid open grass- and scrublands. They remind me of pronghorn antelope in their size, colouration and habitat preferences, and they’re equally wary of danger, springing away at the first hint of peril.

With some 6,000 springbok on the vast ranch we were hunting, and given the number I’d seen each day, I expected this to be the least challenging component of my Macnab. But nearly three kilometres of walking later, with no springbok in sight, I was beginning to second-guess myself and Stephan was getting downright edgy. Just as we were reconsidering our strategy, however, Stephan set up the sticks.

Shooting sticks are core to the hunting experience across the Dark Continent—PH’s use them as walking sticks, as pokers to prod at spoor and push thornbrush aside, and as pointers when describing landscape features. When they’re planted upright in the ground, however, the message is clear: it’s shooting time.

Nobody says much after a missed shot. I was feeling a mixture of disappointment, dejection and embarrassment, as it was a shot I should have made. Stephan was clearly discouraged, too; even within the context of the Macnab challenge, he didn’t want to settle for anything less than a quality ram, and that’s what I’d just missed. Saying little else, he radioed Pedri to bring the truck. We were going to have to try elsewhere.

We’d only walked 100 yards, however, when we simultaneously spotted another ram. It’s amazing how such apparently open cover can conceal so many animals. This ram was farther out, nearly 200 metres and quartered away—definitely not a gimme, considering springbok are such a small animal and I was shooting off sticks. Fortunately, at the shot the ram fell in his tracks, and both Stephan and I felt palpable relief. And with Pedri already on the way with the truck, we hadn’t lost much time. It was 7:22 a.m. Next up, a brace of birds.

Does Ken complete his Mcnab? Find out how he fares with shotgun and rod in Part 2, coming up on Wednesday.

Adventure planning: If you go 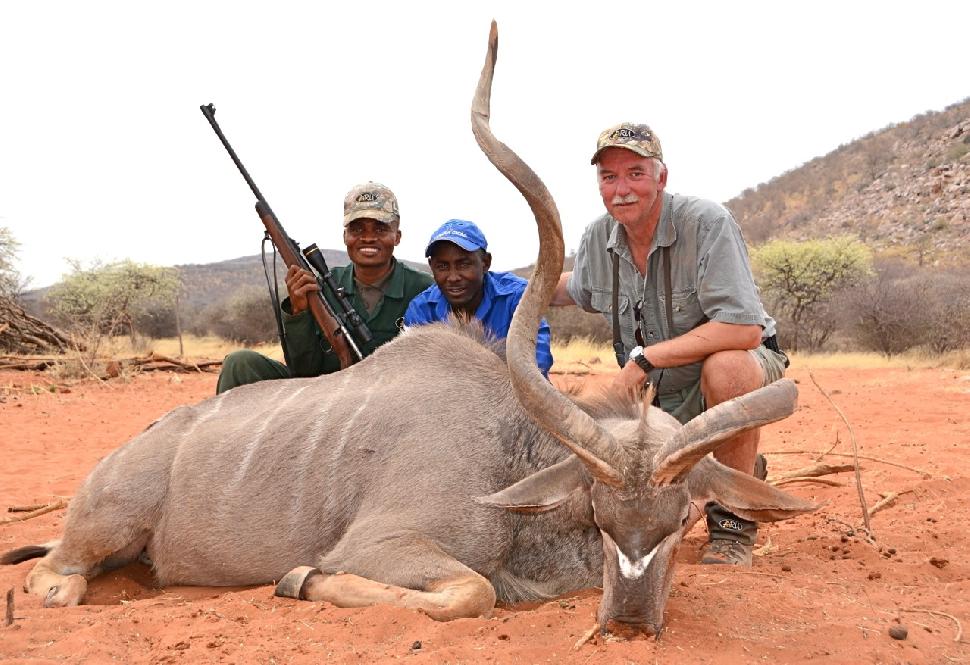 Interested in learning more about my excellent outfitter in Namibia, Aru Game Lodges? Send an email to info@arugamelodge.com or visit www.arugamelodge.com. To explore even further about hunting in Africa, you can meet a wide variety of outfitters at the African Hunting Gazette’s upcoming African Hunting Expo in Calgary (January 31 to February 1). For complete details, go to www.africanhuntingexpo.com.